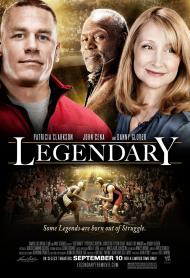 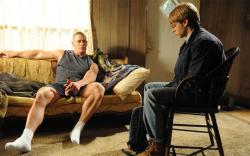 John Cena and Devon Graye play brothers who clearly climbed out of two different sides of the gene pool.

Legendary is a harmless by-the-book sports story. An underdog practices and eventually makes good. For a movie made by the testosterone driven WWE studios, it could have easily been made for the Lifetime channel for women.

Cal is a nerdy high school student living with his single mother in the midwest. You can tell because he wears glasses and his girlfriend dresses like a color blind hillbilly. His father and  much older brother, Mike, were champion wrestlers. After a car accident, in which his father died, Mike left and has not seen his family in years.

Cal is a scrawny kid who suddenly, for whatever reason, decides he wants to follow in the family tradition and join the wrestling team. His mother is not thrilled about it as wrestling has not been good to her. Without her knowing, Cal seeks out his brother and talks him into being his personal trainer.

Legendary was written by John Posey, who plays the high school wrestling coach. His son Tyler plays Cal's nemesis and fellow wrestler, Billy. This is not a completely horrible script, as it moves along one predictable step at a time. It just simply has nothing new whatsoever, to offer.

The most unique character is Cal's girlfriend Luli. She likes to show her breasts to boys willing to pay to see them. She creates her own clothes, but clearly should not.  Madeleine Martin's childish voice makes her seem all the more ridiculously charming.

The cast is passable at best. Danny Glover shows up occasionally to give Cal pointless advice. Cena confuses keeping a straight face with actual acting. The only time he is convincing is when he is training Cal or cheering for him at a match. Devon Graye, as Cal, gets the most screen time but is adequate at best. Cal and Mike are both wounded creatures but you barely see their hurt.

The only one to bring her "A" game is Patricia Clarkson. She easily out acts everyone around her. This is best exemplified by the scene where she confronts an arrested Cena.  She stands above him, pouring out some emotion while he looks as if he is struggling to remember his one line. I watch WWE with my son. I like John Cena, but he has got to learn to let down his mask and show some vulnerability or he will never be a real actor.

Legendary is meant to be a feel good family film and it succeeds as much as it can in that area. It wants you to like these people and you will. It presents them with obvious road blocks that require little more than perseverance to get over. This is not a great movie but it is likewise not a lousy one. It is simply extremely generic.

Legendary (while certainly not living up to its name) is nowhere near as bad as its online reputation. At Rotten Tomatoes it currently has a 17% fresh rating. Just seven critics out of 42 enjoyed it enough to recommend it, while 59% of audiences liked it. It also has the dubious distinction of having one of the shortest turnarounds between opening in theaters and being released on DVD of any movie in North American history – a mere 18 days. At the box office it earned back less than half a million dollars of its five million dollar budget.

By any measure Legendary was a flop. But as Eric wrote, it really isn't as bad as all that. The script lacks originality but it hits all the right notes. Sure we've all heard this song before but it's a pleasant enough little melody. The setting and these characters have a real veracity to them. I was definitely rooting for this family to heal even though there's nothing all that compelling about their story.

I kept waiting for Danny Glover's character's connection to the Chetley family to be explained and it is near the end of the movie. I won't spoil it since the filmmakers obviously wanted it kept secret. We learn it when Cal learns it. It is an emotional moment that brings the story full circle. Before then Glover's character comes across as an odd old man with perhaps too much interest in this teenager.

As for the acting, I'm with Eric on this too. Patricia Clarkson is going for the Oscar while the actors playing her sons are pretty much trying not to embarrass themselves. Devon Graye isn't horrible but he isn't that good either. At least he manages to exhibit some genuine emotion, which is more than can be said of John Cena, who sleepwalks through the movie, mistaking acting for staring off into space with a stoic expression seemingly chiseled across his face. Cena handles the dialogue okay, meaning he speaks most of his lines with a fairly natural sounding delivery. But whenever he is called upon to show an actual identifiable emotion he fails miserably. The Rock is Marlon Brando compared to this guy.

Clarkson acts not only circles around her costars but figure eights. She provides whatever emotional spark the movie contains, but there's only so much one actress can do, especially when she's not the central character in the story. The filmmakers clearly overestimated the number of John Cena fans willing to pay money to see him in a movie in a theater. As Eric wrote, Legendary is really more like a television movie you'd find on Lifetime or the Hallmark channel for free.