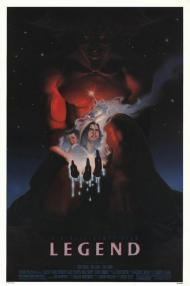 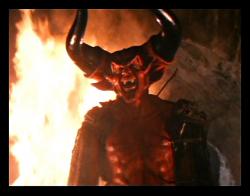 Tim Curry as Lord of Darkness in Legend.

A strange hodgepodge of Tolkien, Disney, the Brothers Grimm, the Muppets, and Cocteau's Beauty and the Beast, Legend is a fairly dark fantasy/fairytale featuring a pre-superstardom Tom Cruise and an iconically made-up Tim Curry as Lord of Darkness (it was Oscar nominated for Best Makeup). His red devilish appearance with those large curved horns jutting from his head is one of the most famous images in all of fantasy cinema (see photo). Although Legend wasn't a hit upon its initial release, the director's cut that was released on DVD in 2002 has since propelled the movie to cult status.

Due to the high cost of shooting on location, director Ridley Scott made the decision to shoot the majority of Legend indoors. A forest set was built on the legendary 007 stage at Pinewood Studios in England. On June 27, 1984 the entire set burned down during a lunch break. Luckily no one was injured but with 10 days of filming remaining a replacement set had to be hastily recreated on another stage.

Legend has seen several different incarnations over the years. The original cut ran 125 minutes. This was cut down to 95 minutes for its premiere in Great Britain in 1985. This version featured a score by Jerry Goldsmith. For the 1986 North American release the movie was trimmed by an additional 6 minutes and the entire score was replaced with contemporary songs by Tangerine Dream, Yes lead singer Jon Anderson, and Bryan Ferry. For the DVD director's cut the movie was restored to its original length with the Goldsmith score put back in place. The ending on the director's cut differs from the original theatrical release as well.

In a classic fairytale setting, the plot involves an intrepid (and musically inclined) princess named Lili (Mia Sara) and her friend, a forest child named Jack (Cruise) who is teaching her to speak the language of the animals. One day Jack takes Princess Lili to see a pair of unicorns. Lili goes against Jack's instructions and tries to touch one of these rare magical creatures. Demonic forces, meanwhile, are hunting these same unicorns and just as Lili touches it, the male unicorn is shot with a poisoned dart. A wintry pall instantly settles over the land, nearly trapping Jack beneath the ice of a river in which he had dived to retrieve the ring the princess had just mischievously tossed in. All of this leads to the climax at the underground domain of a demon known simply as Lord of Darkness, where Jack must rescue the princess, the unicorns and the entire forest from eternal night.

The villain, Lord of Darkness, is memorably played by Tim Curry. His body and head covering makeup took 5½ hours to apply and another hour to remove during which Curry would soak in a tub to soften the spirit gum base of the makeup. His already deep and theatrical speaking voice was electronically enhanced to give it an even bigger, presumably more demonic, sound. He gets some of the movie's best lines, which his delivery really enhances, such as this little pearl of wisdom, “The dreams of youth are the regrets of maturity.” He is by far the best thing about the movie and the biggest reason (other than the presence of Tom Cruise) why it's remembered.

A long haired Tom Cruise makes like Mickey Rooney as Puck in A Midsummer Night's Dream (a movie, by the way, that featured a very young Billy Barty, who also appears in this movie as Screwball). Looking like one of Peter Pan's Lost Boys, Tom Cruise scampers through the forest with a vaguely intense expression stamped on his face. Mia Sara plays Princess Lili as a flesh and blood Disney heroine. She even makes like Snow White and sings while strolling innocently through the forest.

Visually stunning, Legend is an intriguing mix of fantasy ingredients in a fast-paced adventure pitting good against evil. In tone it varies. Sometimes it seems aimed at small children then at other times it features grotesque demonic sidekicks saying things like, “May be innocent, may be sweet... ain't half as nice as rotting meat.” Legend is an amalgamation of many familiar fantasy types and tropes, resulting in an entertaining, if slightly uneven, motion picture. 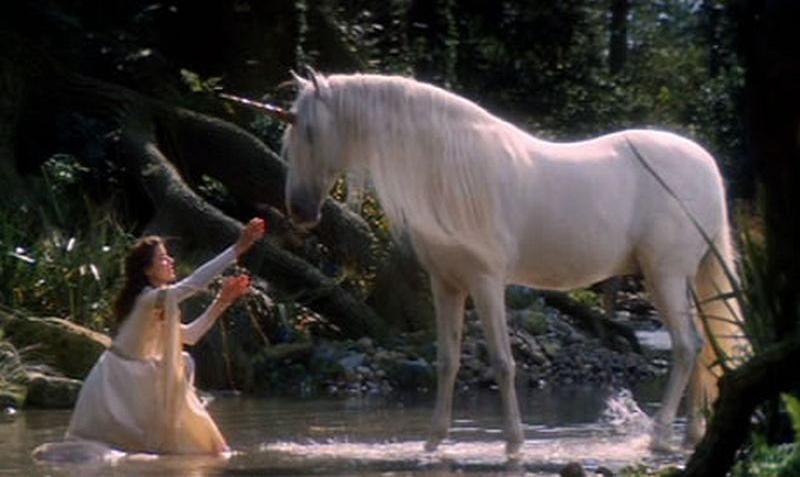 My first exposure to Legend was through the edited version, featuring the Tangerine Dream soundtrack. I saw it several times and even though I watched the director’s cut this time around, I still expected the song “Loved by the Sun” to play at the end. “Legends can be now and forever…”

Although I had fond memories of Legend, its flaws were too obvious to ignore during this viewing. As Patrick wrote, it is a strange mash up. I am not sure if it is my age or the different versions but the uneven tone of the film bothered me this time around. It moves between the dark and the childish. The humor was akin to something you would find in a Saturday morning television show like "The Power Rangers."

Not only did the humor annoy me but I kept getting distracted by Tom Cruise’s looks, and not in a good way. Ridley Scott used plenty of close ups and every time he smiled, Cruise’s big uneven teeth took up half the screen. One of my sons passed through the living room as I watched this and remarked that Cruise looks horrible with long hair and I agreed.

Although flawed and a box office failure, Legend has much to offer. Patrick was spot on when he called it, “visually stunning.” The scene of Mia Sara running through the woodland flowers and the air filled with petals and pollen is one that has never left me. As princess Lily remarks, “This place holds more magic for me than any palace in the world.” In fact, Legend has many such memorable images. The unicorns frolicking in the river is like a dream brought to life. As Patrick mentioned, it is Tim Curry, buried under demon makeup, who steals not only everyone of his scenes but the entire movie.

Patrick mentioned some nice lines. I like when the fairy Oona, is talking to the prisoners and says to them, “You look like mourners at your own funeral.” The Lord of Darkness says something he lives to regret, “I require the solace of the shadows and the dark of the night. Sunshine is my destroyer.” One line that I recalled was absent in this version as it was part of the song, “Loved by the Sun” it goes,  “Teaching us to love for goodness sake…” Yeah, it is kind of cheesy but then this film is as well. 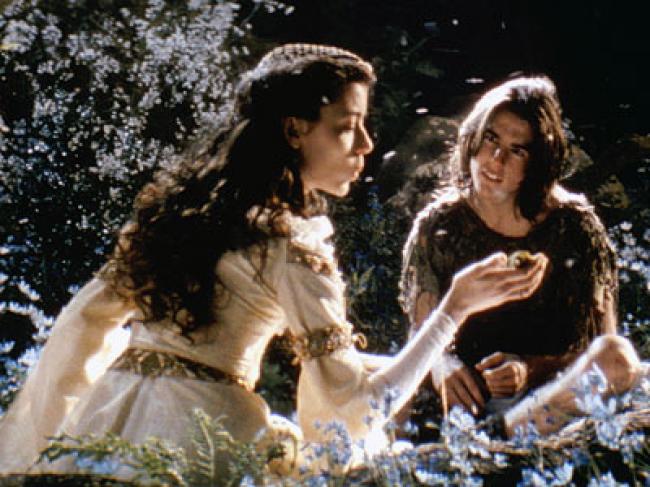 I would throw Terry Gilliam into the mix of inspirations for this film. Certain visual elements here put me in mind of his Time Bandits. And, like many of Gilliam's films, it's the visuals that are the best thing about it. Ridley Scott and his creative team deserve a great deal of credit for creating such an iconic looking story. If only the plot of that story equaled the visuals.

This was the first and only time I've seen this movie and it was the original, shorter, American cut, with music by Tangerine Dream, that I saw. I can't say that I was so impressed by it that I have a desire to seek out the director's cut. I thought its brevity was one of its strengths, feeling like a short story rather than a fantasy epic. There's not a great deal of story here and stretching it longer doesn't seem like a solution.

I disagree that Cruise looks horrible with long hair. I think it suits the character perfectly. His unibrow was more distracting to me than his teeth were. Mia Sara was more of a surprise to me than Cruise. Prior to this I was unaware that she'd starred in anything besides Ferris Beuller's Day Off. Together they make a good looking fantasy couple. The scene with the unicorn is perfectly staged and looks like a Pre-Raphaelite painting come to life.

Curry's Lord of Darkness is as impressive as both Patrick and Eric said. He is indeed a scene-stealer. That his entire look was achieved by makeup and without the assistance of modern CGI makes it even more impressive. Thanks in large part to his voice, Curry is able to project and emote beneath the layers of makeup and his performance is much more than just the makeup.

Also like my brothers, I found the humor to be annoying. The antics of the dwarfs, or whatever those creatures actually were, seem to be aimed at children and they undercut most of the tension. The scenes at the climax are particularly uneven in tone as we cut between the Lord of Darkness trying to seduce Lili (with both Curry and Sara delivering intensely, dramatic performances) and Cruise and the dwarfs doing something silly. And the fact that no one actually dies, despite a couple of close calls, also decreases the tension level.

This film is beautiful enough to look at it that it's worth watching at least once. However, now that I've seen it, I can't ever imagine wanting to do so again.