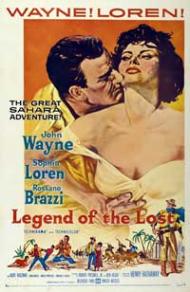 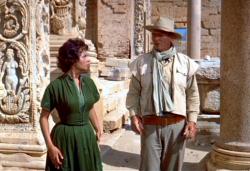 Sophia Loren and John Wayne in The Legend of the Lost

Long before Brendan Fraser and Rachel Weisz went searching across the Sahara desert for an ancient city in The Mummy, there was John Wayne and Sophia Loren in The Legend of the Lost. I expected this to be an adventure tale, considering the premise, but it ended up being more of a love triangle than an all out action film

Rossano Brazzi plays Paul Bonnard, a pious archeologist in Timbukto, looking to hire a guide who can lead him into the desert in search of a lost city, he heard about from his father, who never returned from his own quest for it. He ends up hiring the hard drinking and whoring Joe January, played by John Wayne. He also meets Sophia Loren as Dita, a pick pocketing prostitute. He shows her mercy and kindness.

Paul and Joe are as opposite as they can be. They head out into the desert where they do not exactly become best friends. "What are we doin', out here in th' middle 'o' nowhere, lookin' fer nothin' in the wrong season!" Joe yells at Paul who finally tells Joe they are in search of a lost treasure. Things get interesting when Dita catches up to them and Paul agrees to let her go along.  Joe comments, "I like my chippies in a room!"

The religious Paul treats her with dignity, which she enjoys, while Joe treats her as a loose woman. At one point, while spending the night in the desert, Joe pulls her off to the side with a blanket and a bottle of liquor, assuming she is willing to party with him. She refuses and Paul defends her.

They eventually find the ruins of a deserted city and discover what happened to Paul's father. The love triangle hits a new stride as Paul discovers his manly urges and Joe feels left out. The film's best line comes near the end when the Duke lays one on Sophia Loren, who states, "You never kissed me like that before." and Wayne replies, "I always meant to."

The Legend of the Lost has a very authentic look. It was filmed on location in Libya. The lost city scenes were filmed in the real ruins of an ancient city, Leptis Magna, built by the Romans in Libya. One of Wayne's lines should have been given to Loren. As they walk about the abandoned city, Wayne identifies the place as built by the Romans. The Italian born Loren asks, "Are you sure?" Wayne then reads Latin written on an arch.

The Legend of the Lost could have used some more excitement.  A couple of times they see some locals in the desert, but they never offer any trouble.  Such films as The Mummy (1999) and Indiana Jones and the Last Crusade(1989) owe a bit of debt to this film but both exceeded it in entertainment value.

Although she would eventually make better films, 1957 was the year many American audiences first took notice of Loren. This was her third film of the year. She had already starred with Alan Ladd in Boy on a Dolphin and The Pride and the Passion with Cary Grant and Frank Sinatra. Adding John Wayne to that list and it was clear that Sophia Loren had arrived. 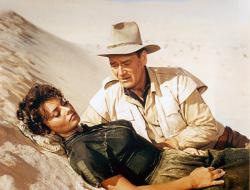 Sophia Loren and John Wayne in Legend of the Lost.

The premise is intriguing enough and the three central characters are all fairly interesting if unoriginal. This love triangle features three common archetypes. The whore with the heart of gold, the self-professed man of god and the hard living man that openly partakes in the pleasures of the flesh. By the end of the movie these characters will have revealed their true natures.

The three stars are good in their respective roles. Sophia Loren was born to play parts like Dita. She was sexy as hell but also projected a certain dignity and brought a raw intensity to her acting. Rossano Brazzi makes quite an impression as the sanctimonious Paul Bonnard. The following year he would play one of his most famous roles, the Frenchman Mitzi Gaynor falls in love with in the movie version of Rodgers and Hammerstein's Broadway Musical South Pacific. John Wayne is playing his stock cowboy character only transplanted to Africa. He also served as a producer on this movie through his company Batjac Productions.

As Eric said, this is more of a dramatic love story than an out and out action movie. It does contain a sense of adventure but it is interspersed with many talking scenes and the story is in no hurry to unfold. I also noticed a bit of slapstick where Dita hits Joe over the head with a frying pan that seems out of place with the more serious tone the rest of the movie is trying for. I don't know if this was Wayne's idea or not but he was fond of including physical altercations with his female costars.

The script was co-written by the legendary screenwriter Ben Hecht. Eric mentioned a few of his favorite lines. Mine is spoken by Brazzi when he makes this poetic observation. “Walking alone in the desert is wonderful. It's like walking on the face of a clock that's stopped.”

The location cinematography adds much to the authentic look of the movie, again I am agreeing with my brother. The scenes in the Roman ruins are haunting. They convey a sense of ancient mystique and majesty. It didn't bother me that Joe identifies the site as a Roman city for Dita. Yes, Loren is Italian but that doesn't mean Dita is educated in ancient history, whereas Joe January is an expert in the geography of the Sahara Desert. At any rate it is here in the ruins that the story takes a sudden dramatic turn, although I can't say it's a very surprising plot development.

Legend of the Lost is an interesting and well-made character study set in an exotic locale. In John Wayne and Sophia Loren it features two all time great movie stars; with more action and less talking it could have been a classic action/adventure/romance. 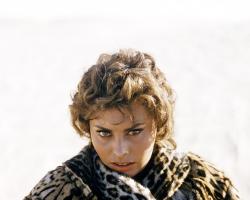 Sophia Loren in Legend of the Lost.

The plot to this movie is as dry as the location. As my brothers wrote, it's more drama than adventure story and it's paced as such, which means slowly. And frankly the drama just isn't that strong and the love story is fairly weak.

Wayne is playing his usual stock character, but someone like a young Bogart would have been a better choice. Joe January is clearly a bit of a ne'er do well and a drunkard. When the movie starts, he is living in a jail cell and deep in debt. It seems obvious that he's partaken of what Loren's Dita is selling. He's a bit of a sand bum. He needed to be played darker than Wayne's normal character. He also fails to generate the requisite heat between himself and Loren. Of course it doesn't help that he was 27 years older than her.

The most impressive thing about the film is the location. When I started to watch it, I assumed that it would be filmed somewhere in the southwest US, but it quickly became obvious that it was filmed on location, in Libya as my brothers mentioned. The shots of the desert add greatly to the atmosphere and sense of realism, particularly in the later scenes when Wayne and Loren are stumbling across the desert without water. Reportedly Wayne enjoyed the location as well. He telegraphed his wife to come over immediately. She, thinking there was some emergency, hurried over, only to discover that he wanted to show her the sunsets. Sophia Loren, however, did not enjoy the location work as much as Wayne. During the cold nights she had a space heater brought in which nearly killed her when the carbon monoxide it generated filled up her sealed room.

If this movie were edited to an appropriate pace it would only be about an hour in length. It's more like a short story than a novel. There's all the ingredients needed to make a good movie here, they're simply spread too thin.