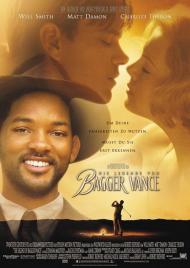 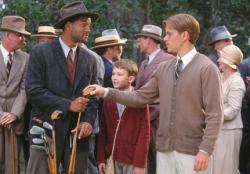 Will Smith and Matt Damon in The Legend of Bagger Vance.

I have always been a huge fan of classic movies, especially those made before 1960. Movies then were far subtler than most are today. Of course it takes a longer attention span to watch a movie that does not have an edit or shot change every three seconds; but actually allows, or rather forces, the actors in the scene to maintain a character. Old movies, in general, have more dialogue and less scene changes than new ones. Once one gets past the lack of in-your-face eye candy which is really what most of today's movies are based on, one begins to realize that it can be far more powerful when a movie implies something than when it rams something down our throats until we are gagging on the graphic details. The Legend of Bagger Vance, from director and superstar Robert Redford, is one example of a new movie with the style of an old one.

Meticulous in its attention to the time period, which ranges from right before World War I to the early thirties. Matt Damon plays Rannulph Junuh; former golf golden boy who suffers a mental and spiritual breakdown when the Germans wipe out most of his entire company. Flash forward a dozen years or so as he returns home to Savannah, Georgia in time to reluctantly take part in an historic golf match to take place on the course that his former fiancé (Charlize Theron) owns. Enter mystical caddy Bagger Vance, played by Will Smith who proves he is an actor capable of much more restraint than one might expect given his track record of playing wise-ass action heroes. Can he help Junuh to find his swing in time to beat legendary golfers Walter Hagen and Bobby Jones? The story is actually told through a flashback by narrator Hardy Greaves (Jack Lemmon), who was a boy of ten when the events occurred.

The assumption made about period movies or ''hat'' movies as they are called, is that they move at a snails pace and never really pay off emotionally. Neither complaint is true of Bagger Vance. At just over two hours, this movie spends the first hour introducing the characters and showing how they came to their moments of crisis, the second half shows redemption through golf as a metaphor for life. This is one Redford production that moves along nicely, unlike The Horse Whisperer or The Natural. And yes the ending is hopelessly romantic, as it damn well should be.

The talented young trio of actors at this movies core, Smith, Damon and Theron are very much at ease with the world their characters inhabit and each has the needed physical beauty and screen presence to play them as larger than life. From the opening shot to the final credits this is one gorgeous film. Bagger Vance also evinces a gentle humor similar to A River Runs Through It. Rate this one a winner! 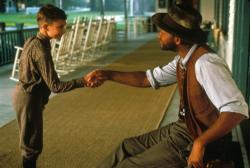 Will Smith in The Legend of Bagger Vance.

Patrick got a few things right. The film is beautifully shot, and the period is accurately detailed. What he gets wrong is the pace and Will Smith's performance.

Robert Redford is a true artist. His direction is a panorama of color, mood and movement. The dark, smoking scene when Hardy first meets Junuh sitting in shadows. The setting obviously representing where Junuh's life is presently at. The beautifully shot golf scenes on manicured lawns almost made me want to pick up the game. The shot where the camera flew through the air with the golf ball was breathtaking.

Where Redford seems to fail as a director is in directing his players. I find that interesting considering he is such a fine actor himself. The scene where Charlize Theron pulls Matt Damon aside in the middle of a round to pour her heart out seemed way out of place. I nearly gagged when she very emotionally said ''should I melt in your arms like butter on a muffin?'' Only Scarlet O'Hara working her charm could have gotten away with that line.

Will Smith pretty much made some easy money here. I am guessing this is all the direction he got. ''Will, look serious and say your line.'' Unless acting subdued is a lot of work for him, he could have probably shot his part in a day.

What is it with Redford and blond actors? He directed Brad Pitt and now Matt Damon. Something Freudian going on? Damon has never been my favorite actor. As long as he's talking he does alright. However, he looks constipated when he doesn't have any lines.

As is the norm in a Redford film the pace is in first gear. Granted it isn't the chore that watching Ordinary (boring) People is. Still a peppier pace wouldn't hurt.

Charlize Theron in The Legend of Bagger Vance.

Watching a movie on video is such a different thing than watching it on the big screen.  Had I seen this movie in the theater, I don't know that I would have liked it so much.  But watching it late at night, curled up on my bed, I loved it.  Perhaps it is easier to watch a slower paced movie on video, after all, I saw Ordinary People and The Natural on video and I liked both of them, especially The Natural, which like The Legend of Bagger Vance, uses Sport as a metaphor for life.  Which is odd, because apart from Tennis, I'm not a sports fan at all.

Eric mentioned Redford's habit of hiring younger versions of himself, particularly Bard Pitt, who could easily be his son, and now here, Matt Damon.  It's funny because I thought the exact same thing while watching this movie.  It's a habit I'm grateful for though, because unlike Woody Allen, who thinks he can play any age, Redford knows not to try to play every role himself, and instead hires a surrogate actor to play the younger parts.  He also seems to enjoy the time period of this movie.  The Natural, and The Legend of Bagger Vance both take place in the early part of the 20th century.  Maybe it stems back to Redford's portrayal of Gatsby in The Great Gatsby, as both The Natural and Bagger Vance both have elements of an F. Scott Fitzgerald short story.

I disagree with Eric's assessment of the acting.  In most of Will Smith's movies, at least the action ones, he seems to be playing himself.  Is there much difference between his characters in Independence Day, Men in Black, and Wild, Wild West?  In this movie, he shows remarkable restraint and manages to say his inspiring, but vague speeches to Matt Damon's character without making them sound corny or over done.  The scene where Charlize Theron pulls Matt Damon aside near the end of the Golf Match, that Eric mentions as being out of place, I found entirely justified.  Her character of Adelle sees that Junah is becoming a success and is afraid of losing him again.  The last thing she wants is for him to leave again.  She is a Southern Belle used to getting her way and being the center of attention.  This scene is her reclaiming of his attentions.  As for Matt Damon himself, I agree with Eric in that he is not and never has been one of my favorite actors.  This movie nearly changed that opinion...nearly.  As Eric mentioned, the first shot of Damon, shows him in smoky shadows.  He is in fact, drunk and playing poker.  For this scene and a few to follow, he actually comes off as dark and disturbed.  Unfortunately, as the movie progresses and he regains his confidence, he becomes more Damon-like, but not unbearably so.

I think the only way I could have enjoyed this movie more, would have been if Redford had gone with Brad Pitt in the role.  Brad plays dark better than Damon and he's closer to the correct age for the character.

Like Eric, I too felt the urge to pick up a club after watching this movie, but that's not what it's about at all.  Golf is a metaphor for life and you don't need to have played or even like the game to enjoy this movie.