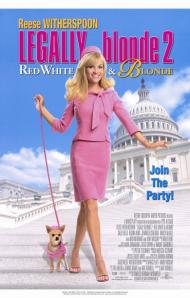 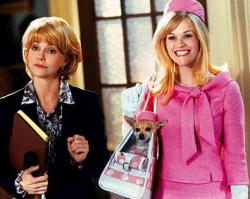 Legally Blonde 2: Red, White, & Blonde is a near perfect sequel. Witherspoon is again a delight. Snappy dialogue and plenty of jokes make this movie as satisfying as a banana split with all the toppings.

Elle Woods, now an engaged Harvard graduate, heads to Washington DC to be an aid to congresswoman Victoria Rudd (Sally Field). Elle is attempting to get a bill passed that would outlaw cosmetic testing on animals. The Bruiser Bill is named after her pet Chihuahua, whose mother is in a testing laboratory and is therefore unable to come to Elle's wedding.

Elle, of course, charms everyone she meets. Some sooner than others. She eventually gets a chance to have her bill considered when she gets stabbed in the back by the very congresswoman she is working for. Elle discovers this by her extensive knowledge of makeup and facials. I didn't get all of the jokes, because so often they relate to some beauty product. Either way, this knowledge is proven very useful to Elle as she navigates the halls of our capital.

A great supporting cast that includes not only Sally Field, but also Luke Wilson and Bob Newhart. However, it is Jennifer Coolidge as Paulette, who steals many and most scenes she's in. Often a scene is playing out and in the background or off to the side she will make a comment. When the movie opens Elle's friends are looking at a scrapbook of Elle's time at Harvard. They come across a photo of Elle demonstrating her bend and snap exercise. Paulette remarks to no one in particular, 'I did that last night naked, I broke a window.'

The movie is a definite chick flick. So many jokes involve cosmetics. The movie goes a bit over-the-top when Elle calls up her sorority sisters in a scene that resembles the President of the United States authorizing the use of atomic weapons.

The character of Elle is both delightful and as fictional as they come. Come on! Has anyone ever known a girl in real life who spends this much time on her looks and is not stuck up? That, however, is the charm of this movie. Elle Woods is a bubbly, generous, polite, outgoing, friendly girl wrapped up in a beautiful, high-maintenance package. Real or not, there are a lot of less entertaining ways to spend your afternoon than following around this 'dumb blonde'. 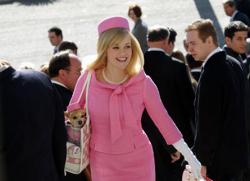 Legally Blonde 2 is one of the silliest movies that I have ever seen. While the original was silly enough in its own way, I never felt that it went so over the top in the way that this one does. Elle Woods trying to win her boyfriend back by getting into Harvard is one thing, but Elle Woods trying to push a bill through Congress simply by using her ditzy blonde charm was just too much for me.

Eric definitely enjoyed this movie more than I did and I really only agree with him on one point. Jennifer Coolidge as Paulette is hilarious. She only has a tiny part, but she makes the most of it. Her laugh inducing performance should come as no surprise to anyone who's seen her in A Mighty Wind or Best in Show. She has a history of stealing scenes. A less fortunate supporting role is Bob Newhart as the doorman with insider knowledge of Washington. For a legendary funnyman, Newhart has surprisingly few jokes.

I'm actually rather surprised that Eric enjoyed this movie as much as he did, given that he generally takes politics so seriously. In this movie it's hard to take anything seriously. And when a group of cheerleaders performing a routine inside the Senate convinces a group of Senators to sign a petition, it becomes virtually impossible, and has clearly gone too far over the top.

Through out all of the overdone hijinks, one thing does remain constant. Reese Witherspoon retains her charm, holding on to the mantle of America's Blonde Sweetheart that she inherited from Meg Ryan. If only she could find a role with just a touch more depth to it. 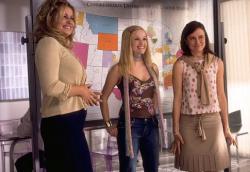 Reese Witherspoon is adorable. She's Doris Day for the new millennium. It's only because of her that this movie is even palatable. Since I have yet to see Legally Blonde this movie was my introduction to Elle Woods. She's a delightful cinematic creation trapped in a very bad movie.

Sure it has some laughs (although the gay dogs weren't funny) but this movie's more lightweight than Calista Flockhart after pilates. The only time a plot this absurd works is in Airplane or a Wayans brother's movie. This Blonde is really a mess and completely wastes the talents of Sally Field and Bob Newhart. But hey, I'm sure it pays the rent. 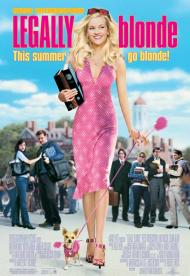