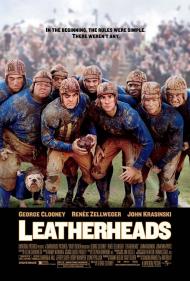 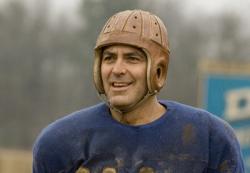 Leatherheads is a fond look at a time gone by. It takes place a few years after World War I and centers around the beginning of professional football. The history of it all tends to get muddled and the very politically liberal George Clooney, cannot keep his politics off the screen.

Clooney stars as an over the hill football player, Dodge, who recruits a war hero/college football star, Carter, to play on his rinky dink team. Zellweger plays a reporter, Lexie, out to get the true story on Carter's heroism. A love triangle develops and laughs ensue, or more accurately, a few laughs ensue.

The pacing and dialogue is reminiscent of a 1930's romantic comedy. Zellwegger makes like Rosalind Russell in His Girl Friday, playing the only female reporter at a Chicago newspaper. Like Russell's character, Lexie has a quick wit and fast comebacks at any man who flirts or threatens her. Her hairstyle is very much like what Rita Hayworth and Veronica Lake made famous in the 1940's. As a reminder that this movie takes place during the silent film age, there is a silly sequence in which Lexie and Dodge get chased pointlessly by some policemen in a brief homage to the Keystone Cops.

Carter became a war hero by chance and simply rode the wave that others put him on. One of Dodge's last lines in the movie is that, "We need our heroes." Making the point that we create them as much as they create themselves. Clooney is not merely satisfied with debunking soldiers as heroes, he has to insult them as well. In one scene Dodge and his friends are about to get into a fight with a bunch of soldiers. He tells the leader of the servicemen to extract himself from the situation. The soldier goes blank face at the word "extract", so Clooney has to explain it to him. It is not a funny line. No one in the theater laughed at it. The only point to it was to call this soldier, and in effect the rest of the soldiers, dumb.

The military is certainly not off limits to ridicule and jokes, but it seems a bit low to make fun of U. S. soldiers while we are engaged in conflicts overseas. There are only three soldiers with lines in this movie. One is a fraud, another is bribed into lying, and the third one is stupid. With films like this and The Good German, it appears that George Clooney is attracted to movies that make the U. S. Military look bad? 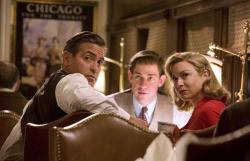 "Clooney is not merely satisfied with debunking soldiers as heroes; he has to insult them as well." Wow, Eric. If this isn't evidence of your paranoia, I don't know what is. If you walked into this movie without knowing anything about George Clooney, would your reaction really have been the same? Don't you think you're reading way too much into this, based on what you think his politics are?

Also Eric, you left out at least two soldiers, besides the three you mention. Dodge himself is a veteran of the Great War, which is how he recognizes one of the other soldiers in the bar brawl at the end. And the soldier that he recognizes isn't treated negatively. Plus, since this movie takes place in 1925, although it's not explicitly stated, you can safely assume that a great many of the football players on the team probably were involved in the war as well.

And if you're so worried about how people are treated in this movie, what about the sports reporters? They're represented as being crass alcoholics who can't do their jobs. Or what about Sports Agents? The only one of them that's shown is slimy, with no morals or scruples. Are you saying that in every movie, every type of person or profession has to be shown as being made up of both good and bad people?

Apart from that though, you're right about this movie. It does want to be an old 1930s screwball comedy. The problem is that it just isn't that funny. The best scenes involve the three main stars and far too much time is given over to the football games, which are the weakest scenes in the movie.

Clooney and Zellwegger have the talent to play their parts, but the script just doesn't support them. It's not snappy or zippy enough. Their stings and barbs aren't sharp enough and so eventually the movie falls short and is ultimately a disappointment, but this is certainly nothing to do with Clooney's politics or his depiction of Soldiers or Veterans. 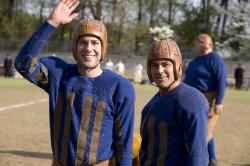 Eric, I think Scott is right that your personal dislike of George Clooney and his politics clearly influenced your review. The only intentional insults to servicemen in this movie happened in your mind while you were watching it. As Scott pointed out, George Clooney is playing a veteran himself and nearly all of the men on his team fought in the First World War.

That being said, this isn't a very good movie. Although it tries hard to emulate those hilarious screwball comedies of the 1930s it never quite succeeds. Part of the problem is the fact that this type of movie should never appear to be trying in the first place. The jokes should flow with a comedic ease that is lacking here.

There are a few humorous moments and some decent lines. My favorite scene is when Dodge and Lexie are arguing while in upper and lower berths on a train. They have a rapid-fire conversation where they each keep opening and closing the curtain on their bed. At one point Lexie says, “So you want to play dirty, huh?” and without missing a beat Dodge replies, “Maybe later, I'm a little tired right now.” I think Clooney fares better than Zellweger. He is certainly closer to Cary Grant than she is to Rosalind Russell, although truth be told, neither one is fit to stir their classic counterpart's martini.

Leatherheads needed more scenes like this one but instead we get too many unfunny sequences on the gridiron. For anyone who wants to see vintage gut-busting slapstick on a football field watch either Harold Lloyd's The Freshman or The Marx Brothers' Horse Feathers.

This movie also includes a few unintentionally funny anachronisms. The First World War is referred to as WWI at a time when it was called the Great War. It didn't become WWI until the sequel, WWII, happened. And although the Great War had been over for seven years in 1925, war veteran Carter Rutherford is somehow still in college, even though he would have to be in his late 20s by this time.

Leatherheads is a valiant attempt by George Clooney at combining the sports comedy with the screwball comedy. It succeeds more at the latter but is nonetheless an overall disappointment.