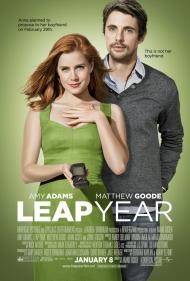 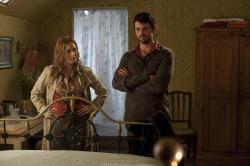 Leap Year is like most average romantic comedies.  You can tell who will end up with who by the previews alone.  Anna has her choice between a very conservatively dressed doctor, who is constantly distracted by his job, or a rugged, unkept Irish bloke who constantly riles her up.  Tough guess huh?

With the outcome so obviously known in advance, the entertainment value falls to the characters.  They have to be unique and worth watching for 90 minutes.  In the case of Leap Year, the characters offer nothing exciting.  Anna meets Declan on her way to propose to Jeremy in Ireland.  In true Hollywood fashion, they bicker and fall in love.  We learn he once had his heart broken but nothing else.

With the characters bringing nothing new to the table, I had to look to the plot for something unique.  However, it is also all old hat.  A man and a woman meeting and falling in love on a road trip goes all the way back to It Happened One Night (1934).  An American business woman finding love in Ireland was done in The Matchmaker (1997).

Leap Year moves along one predictable step at a time.  It attempts some humor by having Anna inadvertently cause a couple of disasters, such as a power failure and a bruised bride.  Neither is actually funny.  By the time Anna gave her "do you wanna not make plans with me?" speech to Declan, I was more than ready to turn this movie off.

The decent scenery was a meager distraction, but hardly enough to make this movie worth the viewing.  If this is the very first film that you have ever seen in your life, you may enjoy it.  All other people are advised to stay away. 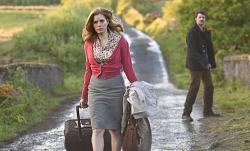 In truth, I watched this movie several months ago and so deplored it that I couldn't even be bothered to review it. Since you took the bullet and went first, Eric, I thought I would throw in my comments, which are in agreement with yours.

Leap Year actually did what I didn't think was possible.  It took the normally charming Amy Adams and turned her into a desperate, high-maintenance shrew of a woman.  I find it hard enough to believe that she got one man to fall in love with her, let alone two.

With a script by the writer of Made of Honor and Surviving Christmas, I suppose I shouldn't have been expecting much, and certainly nothing original, as you say Eric.  This is a strictly by the numbers, lazy romantic comedy.  It's so formulaic you just have to ask yourself, why did they even bother to make this?  Some of the big humor moments in the movie involve mud and cow poo.

Adams, whom I normally love, is unable to do anything with her character.  She's so materialistic that one of the major characters in the film is Louis, as in Louis Vitton, her luggage whom they call by name.  She's so desperate that it's no wonder she can't get someone to propose as her obsession to reach her boyfriend and propose to him on the 29th borders on the psychotic.

There are so many other better romantic comedies than this one, you shouldn't waste your time.  If you want to see a romantic comedy about a high-maintenance girl on the road with a guy, rent It Happened One Night instead.