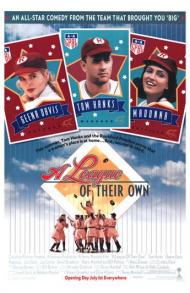 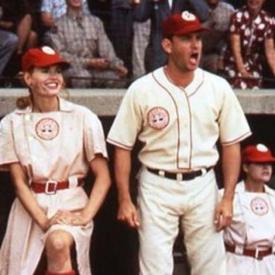 Geena Davis and Tom Hanks in A League of Their Own

I have seen many baseball films but none make me feel as nostalgic as  A League of Their Own.  This probably has much to do with the fact that as kids we spent many a summer day at the ball field, and often due to our older sister being on softball teams.  One year she made an allstar team that won the state championship.  I also enjoy films set in the 1940s, so this is a film I really respond to.

During World War II, many baseball players joined the military service, creating a void in MLB.  The All American Girls Baseball League was created to fill it.  This is its story.  It begins with a couple of country girls, Dotty and her younger sister Kit,  being taken by a scout to Chicago for try outs.  There they meet other girls vying for a position on a team that will pay them $75 a week.

The teams are formed and the girls take the sport very seriously.  However, no one else seems to.  The owners require the girls to wear uniform skirts that were shockingly short for the time.   Some women complain that the girls are being turned masculine.  In response, the league requires the players to take classes in etiquette and manners.

Dotty and Kit find themselves on the Rockford Peaches.  They are joined by other girls with one dimensional personalities.  Mae is the slut.  Marla is the homely one.  Evelyn is a mom, whose annoying son travels with them.  Doris is a closeted lesbian.  Shirley is illiterate.  The only other real character is their coach Jimmy Dugan, who has no desire to be a part of the league but needs the pay check to get him through to his next bottle of liquor.

The cast is great!  Tom Hanks plays the self centered Jimmy Dugan and by the sheer power of his charisma, makes him extremely likable.  He has the film's most famous catch phrase, "There's no crying in baseball!" and is good in the scene where the telegram arrives.

Madonna does some decent work when she has her flirtatious persona going, "Hi, my name's Mae, and that's more than a name, that's an attitude."   Her big emotional out burst, "So you go back there and you tell ol' rich Mr. Old Chocolate Man that he ain't closing ME down!" kind of comes out of nowhere and is not entirely convincing.

Jon Lovitz makes the most of his few scenes and lines. "Yeah, I'm just going home, grab a shower and shave, give the wife a little pickle-tickle, and I'm on my way."  Rosie O'Donnell has some humorous reaction to those around her.  When Madonna suggest that exposing her breast may get the team some attention, Rosie asks, " You think there are men in this country who ain't seen your bosoms?"   The single funniest moment comes when Marla meets her future husband, "I singin' to Nelson, ain't I baby?"

The real standout though, is Geena Davis.  Man is she beautiful here.  Picture Rita Hayworth in blue jeans.  That is, she is gorgeous and can give as well as take.  Note how she handles the young guy who flirts with her in the car.  She and Hanks share my favorite dialogue exchange.  When explaining why she is quitting the team and going home, she says,  "It just got too hard."  and Jimmy comes back with, "It's supposed to be hard. If it wasn't hard, everyone would do it. The hard... is what makes it great."

A League of Their Own pays homage to female athletes of yore while creating a light, entertaining story.   The editing could have been a bit better, but it remains a great historical sports film. 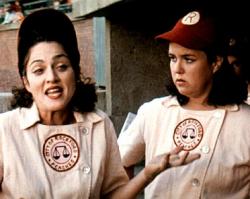 Madonna and Rosie O'Donnell in A League of Their Own.

Like Eric, I too feel a wave of nostalgia whenever I watch this movie. It reminds me of our childhood spent around little league fields on bright afternoons and hazy gloamings, and it also brings back memories of when I first saw A League of Their Own as a young adult back in 1992. I hadn't seen it in many years but I still enjoyed it nearly as much as I ever did. Although to be honest I was more aware of its flaws this time around. The pacing is a bit sluggish at times and some of the sentimentality borders on the mawkish.

Madonna's big outburst that Eric mentioned, proves why she has never made it as an actress or movie star. She cannot consistently maintain a character and she tries way too hard to “act dramatic”. And for someone who is so photogenic and charismatic in her music videos, she lacks those exact qualities on the big screen. Her best moment is her 1940s jitterbug dance number in the bar. She gets the chance to show off her dance moves and clearly seems to be enjoying herself.

Geena Davis was then at the height of her career. She is great as the reluctant star catcher Dottie Hinson. She is as beautiful as she is fit and she handles all the baseball scenes with style. It's easy to believe she's the best athlete in the league. The relationship between her and her resentful younger sister Kit is at the heart of the story and provides its big emotional conflict.

As Eric said, Tom Hanks is excellent as the washed-up former all-star Jimmy Dugan. One of my favorite lines of his is when, completely out of the blue, he tells the team's homely female chaperone, “By the way, I loved you in The Wizard of Oz.”

They did a great job of finding older women (and men) who closely resembled the younger cast members for the Rockford Peaches reunion scene at the end of the movie. The illusion is completed by having Geena Davis and Lori Petty dub the speaking voices of their older counterparts.

Penny Marshall cast her brother Garry Marshall and her daughter Tracy Reiner. She also cast former Laverne & Shirley cast mate David L. Lander (better known as Squiggy) as the radio sportscaster. He sounds right at home uttering classic 1940s dialogue like, “Take me home momma and put me to bed. I have seen enough to know I have seen too much.”

I know it isn't politically correct to say this but I can't resist. And before you accuse me of homophobia keep in mind the fact that I am a proud gay man. With Penny Marshall directing Rosie O'Donnell in a movie about professional women baseball players, the credits should include this disclaimer, “No lesbians were harmed during the making of this motion picture.”

But seriously, A League of Their Own is an entertaining, nostalgic, heartwarming movie offering a unique take on America's favorite pastime. 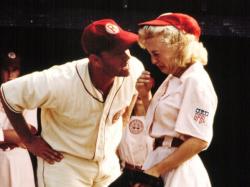 Tom Hanks informs Bitty Schram that there is no crying in baseball in A League of Their Own.

"There's no crying in baseball!" placed 54th on the American Film Institute's list of the 100 greatest film quotes of all time, but I agree with Eric. The film's best line is "It's supposed to be hard. If it wasn't hard, everyone would do it. The hard is what makes it great." Those are easily the two best lines in the movie, one representing the comedic side and the other representing the serious. And although I favor the dramatic line, it's the film's lighter moments that really work best.

I also agree with Eric that the editing is the film's weakest point. It feels rough in places and the running time, at over 2 hours, is a little excessive. The very first scene that should have been cut is the one both my brothers mentioned, which is Madonna's one and only dramatic scene. Patrick is a bit harsh on the Material Girl otherwise, as she and Rosie O'Donnell make a great comedic team and provide some nice moments of comedy.

Patrick, you mentioned Penny Marshall hiring one of her Laverne & Shirley co-stars, but did you spot the second one? The soldier Madonna does her jitterbug with is none other than Eddie Mekka, better known as The Big Ragu, Shirley's Gene Kelly wannabe boyfriend on Marshall's sitcom.

Geena Davis is superb as Dottie. Eric isn't exaggerating her beauty and she wears the fashions of the time very well. It's easy to picture her as a movie star of the period. As Patrick wrote, it's her relationship with Lori Petty as Kitt that is the heart of the film. Did Dottie drop that ball by accident in Game 7 or did she let it go? Davis also shares a good chemistry with Hanks. It's refreshing to not only see a movie where a female relationship is at its center, but that also features a relationship between a man and a woman where romance isn't involved. Interestingly, both Davis and Petty were second choices for their parts. Debra Winger was originally cast in the Davis role, while Moira Kelly was to have played her sister, but was forced to drop out after sustaining an injury while filming The Cutting Edge.

Although I agree that the sentimentality is a bit much at times, I also think it was deliberately so. It gives the movie an old fashion feel that is in line with the time period. It feels appropriate, but the comedy is definitely where the film truly shines. The film's best dramatic scene is when the telegraph is delivered and Davis cries in her room afterwards.

I was never as involved in little league as my brothers were, so I can't say that this movie made me feel particularly nostalgic, except perhaps in the way that Patrick mentioned, where it reminded me of when it was released, which was an astounding 21 years ago this week!