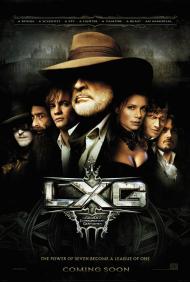 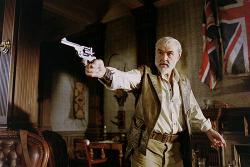 Sean Connery as Allan Quatermain in The League of Extraordinary Gentlemen.

The League of Extraordinary Gentlemen takes a very promising idea and executes its so poorly that all of the joy is drained completely away. And given the cast, headed by Sean Connery, the large budget lavished on the special effects, and a great premise, that takes some doing, but somehow the filmmakers managed it. The result is a big live action cartoon without anyone or anything to care about.

Set in 1899 in some alternate universe where tanks, machine guns, solar panels, rockets, flame throwers, and advanced tracking devices exist, The League... is just another stop the madman from starting a World War movie. A plot Connery must be very familiar with from his Bond days. The hook in this movie is that the agents sent to stop the madman are all characters from English Literature who, in this universe, all turn out to be real people.

Heading the league is the legendary Allan Quatermain (Connery). The other members of the team are the Invisible Man, Dr. Jeykll, Dorian Gray, Captain Nemo, Mina Harker, and Tom Sawyer as the sole American. They all have their special abilities as detailed in the original literature with some minor tweaks. Nemo in the film is a martial arts expert as well as being Captain of the Nautilus, Mina is a vampire although in the original "Dracula" she was never turned, and Tom Sawyer is an agent for the American Secret Service.

It sounds promising doesn't it, a movie with all those characters? The only problem is, for a load of great characters, they have no characterization. They're all just one-dimensional caricatures. Quatermain is the indomitable hero, the Invisible Man is the jovial cockney, Dorian Gray is the posh one, Tom Sawyer is a younger version of Quatermain, Dr. Jeykll is tortured (while his Hyde is all CGI), and Mina just gets to pout and occasionally look sultry. With the possible exception of Connery as Quatermain, who does get a bit of a back-story at the beginning of the movie, I didn't give a damn about any of these people.

And since there are no characters to care about, you are only left with the action, which frankly is about as tense and exciting as your average Saturday Morning cartoon. No, I take that back. I've seen some Saturday Morning cartoons that are much more exciting than this movie. At no point was I ever worried about any of these people and not once, no matter what explosion, car wreck, or gunfight they'd been through, did any of them get the slightest scratch or bruise.

This is a movie of missed opportunities. With the same cast, but with a script that emphasized the characters instead of the special effects, this would have been a great movie. Somehow the filmmakers ended up ignoring the best thing they had going for them. I mean, you can see action and special effects in any movie, but how often do you get to see the Invisible Man mixing it up with Captain Nemo and Dr. Jekyll? Thanks to this movie, you probably won't get a second chance. 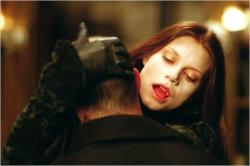 Peta Wilson in The League of Extraordinary Gentlemen.

This movie starts out quite promising. Sean Connery is living in a home for old British gentlemen. The bad guys come in and start shooting up the place with machine guns. Connery and another old fart jump behind a chair. "Automatic weapons! My god. Who has automatic weapons?" Connery asks the other guy, who responds; "Very unsporting. Probably the Belgians." Unfortunately this great British wit does not continue through out the rest of the film.

I enjoyed this movie more than Scott, but only a little. I had help. I watched this movie with my two sons. This movie moves at a steady pace and has plenty of special effects to keep kids interested. They are not old enough to catch all of the many plot holes. However, my ten year old did find it confusing that the technology used in this movie did not exist in 1899.

Sean Connery is given screen credit as an Executive Producer. Not something to brag about. Still, his screen presence and distinct voice are as strong and charming as ever. I just hope his next film is better than this one. 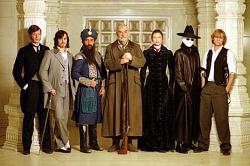 Unfortunately Eric, Sean Connery has never made another film (other than some voice over work). Given the fact that the man turns 82 this year (2012) and no longer even makes public appearances, it looks like The League of Extraordinary Gentlemen will remain his movie swansong. Connery reportedly took the role of Allan Quatermain after realizing he would have made something in the neighborhood of 400 million dollars if he had accepted the role of Gandalf, with the back end deal he had been offered to play the famous wizard in The Lord of the Rings trilogy. He apparently didn't get along with the director Stephen Norrington, who, by the way, had such a negative experience at the helm that he vowed never to direct another movie. A vow which, as of this writing, he has stuck to.

I quite agree with my brothers about the film's lack of depth to the characterizations and the silly hodgepodge of action sequences. Still, and perhaps it was due to my low expectations for it, but I quite enjoyed this movie, watching it for the first time nearly a decade after its initial release. It reminded me of an old fashioned movie serial from the 1930s and 40s. The kind that ends on a cliffhanger each week but where the hero manages to find an escape, at the last possible second, from what looked like certain death.

This odd assortment of 19th Century literary creations is quite amusing. They make like the world's oldest superhero team. Sean Connery is the star of the movie but he plays the least famous character of the group. Allan Quatermain was first introduced to readers in H. Rider Haggard's, King Solomon's Mines in 1885, and played by Stewart Granger in the 1950 film version. The other members of this fictional motley crew are all more well known. This is precisely what prevented the lack of character development from bothering me. Since I already knew these characters from the novels, I had already developed an emotional investment in them.

This movie is based on the graphic novels by Alan Moore, the same guy that gave us Watchmen and V for Vendetta. He didn't like this cinematic adaptation as it apparently bears little resemblance to his stories. And though the movie does manage to incorporate many literary references, it has nowhere near the level of detail crammed into the comic books.

Along with the action and special effects, the script includes a few decent lines worth quoting. Vampire Mina Harker to Tom Sawyer, “You're sweet... and you're young. Neither are traits that I hold in high regard.” Dorian Gray to Mina, after stabbing her in the chest, “I hoped I'd get to nail you one more time. Didn't think it'd be literally.”

The one moment of real sentiment comes courtesy of Sean Connery, who, by the way, was nearly 72 when he made this movie and still holds his own as a believable action star. As he is dying he tells the young Tom Sawyer, “May this new century be yours, son, as the old one was mine.” It is a statement that fits both the character of Allan Quatermain saying goodbye to the 19th Century and to the actor Sean Connery bidding farewell to the 20th.

The League of Extraordinary Gentlemen is far from a great movie but it is fast paced and entertaining in a lighthearted, Saturday afternoon matinee, 12 year old boy target audience, kind of way. It will be fondly remembered, by me at least, as the final hurrah for one of the all time movie greats. If you haven't seen it in years, or like me had never seen it, I recommend you give it a try. You just might be pleasantly surprised by it.