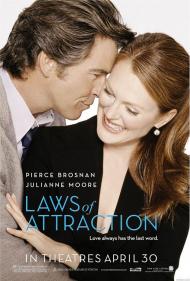 Pierce Brosnan and Julianne Moore in Laws of Attraction.

Brosnan and Moore are not noted for their romantic comedies. However, each does a decent enough job. They are both charming stars and thus pull of what is required. The problem is that there is damn little required. Brosnan's lawyer starts out as a slob and Moore's lawyer starts out as a prude. Neither of these character flaws are expanded or used to any humorous degree. For whatever reason, they eventually end up together. The audience is never told why. There are no sparks whatsoever between the stars.

The direction and editing are as bad as they can be. The best part of Adam's Rib is watching Tracy and Hepburn verbally spar in the courtroom and in their home. Here we have an occasional exchange of words, but more often than not, we just get a montage of courtroom yelling.

At one point, the two lawyers go to Ireland. As they are driving in their rattrap vehicle, Moore begs Brosnan to stop the car so she can see some scenery. After arguing about being late, he agrees. As they stare at the scenery, their borrowed car rolls behind them and crashes down a hill. The scene then jumps to them stumbling through the dark. She is yelling at him for not using the parking break. He is yelling at her for wanting to stop in the first place. That is how the scene should have played out. The actual scene in the movie goes like this; they are in the car and then for no explained reason the scene jumps to them looking at the scenery. The car rolls behind them and crashes. The scene then cuts to them walking in the dark discussing fog. What little amount of thought went into this screenplay?

This movie has the usual revelation scene. You know, the one where one or both of the lovers realize they really are in love. Moore runs into an airport to catch Brosnan. It is explained to her that his plane has already taken off. "Were you meant to be with him?" the employee asks. After a dramatic pause, she answers, "Yes. I was." By this point in the movie, I really didn't give a damn.

Much like the scene with the car. This movie has two good stars in a crappy vehicle.