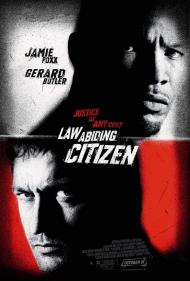 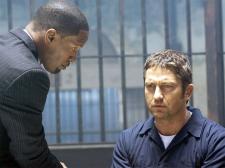 A B-Movie with a big name cast.

If you can turn off your inquiring mind while watching Law Abiding Citizen then you will have a pretty good chance of enjoying the cat and mouse game between Gerard Butler and Jamie Foxx. If you can't get past the implausibility of some of the more outlandish acts then you will probably end up hating it. For me, the movie was just enjoyable enough and the cast talented enough that I was able to sit back and be entertained.

Essentially this is another in a long line of Hollywood revenge stories. Butler plays Clyde, a man whose wife is raped and killed right in front of his eyes and whose daughter is also killed. Foxx plays Nick, the district attorney who makes a plea deal with the two men who killed Clyde's family. Under the deal, one of the men is sent to death row, but the other is only given three years, with the kicker being the one given the early release is the one who actually did the murders.

The movie then jumps 10 years to the day the man sentenced to death is to be killed by lethal injection. Instead of being put quietly to sleep though, he dies a horrible, painful death as someone has switched the canisters used to kill him. We quickly learn that Clyde was responsible as he's spent the past 10 years plotting his revenge. He then kidnaps the other killer and dismembers him in a particularly gruesome manner.

It doesn't take long for Nick and the police to figure out that it was Clyde who did the two killings. He is quickly arrested and placed in prison. This is exactly what Clyde wanted however and it doesn't stop his killings as it seems he intends to take out everyone involved with the case.

There are some plot inconsistencies and the things Clyde is able to accomplish are beyond the realms of believability, but you just have to go with it. Although it's a bit long, the pacing is quick so you don't have too much time to think about how things don't always make a whole lot of sense or all the things that Clyde knows that he would have no way of knowing.

Of the leads, Butler does a decent enough of job as Clyde, although he should never bother trying to do an accent. His Scottish brogue is so strong it ends up coming through anyway. He should just do what Sean Connery does and just use his normal accent at all times and have everyone ignore it. Foxx plays the more complex character, and even though the script doesn't give him a lot to work with, he does manage to give Nick some layers.

With its action and need for you to not think about the plot, this is pure popcorn fare. It's basically a B-movie with some big name leads and a large budget. The kind of movie you might enjoy but you won't want to brag about the fact. 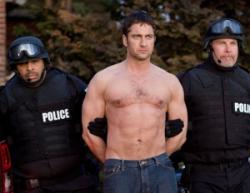 For no reason what-so-ever, Clyde gets naked before being arrested. At least he remembered to do his ab crunches.

These two idiots commit murder and rape.  They leave a witness, Clyde, and lots of DNA behind to convict them.  The lazy prosecutor, Nick, tells Clyde they cannot get a conviction.  "It's not what you know but what you can prove in court."  "This is how the justice system works."  Apparently Nick has never watched Law and Order.  Those guys always get convictions on far less evidence than this.

Ten years later Clyde kills the two idiots and allows himself to get caught.  Apparently this genius wants to enact his elaborate revenge plot from prison.  Why?  If he can pull all of this off from prison, why not pull it off while living free?  The only reason he gives for allowing himself to go to prison is when he tells Nick he did it to convince him he was making all the right moves.

As Scott wrote, the actions and killings are beyond the realms of believability.  Although ludicrous, those moments are the films most interesting.  It asks the audience to try to figure out how these acts can be done.  It is a decent enough mystery to keep you watching.

It also presents a philosophically moral question.  How is justice best served?  Is it best left to judges, lawyers and suits who are working for a paycheck and bucking for promotion or by the people closely related to the crime in question?  Who but someone closely connected to the victims would want a crime solved so passionately?

After we find out how Clyde is doing everything, the movie has clearly jumped the shark.  At first we are told over and over how smart Clyde is, but really it is just as much about the stupidity of everyone else.

The final insult to the audience begs the question of what is justice?  Clyde sought justice as it was personal, by committing crimes.  Nick then does the same.  If two people seemingly on opposing sides of the law commit the same crime, what is justice and is it best served when it becomes personal?  According to this movie, it is.