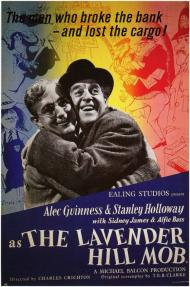 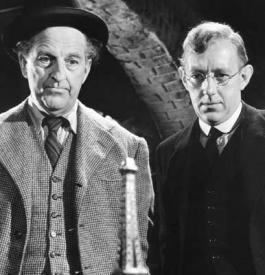 Stanley Holloway and Alec Guinness in The Lavender Hill Mob.

Post World War II Britain was a very different place than postwar America. While America was luxuriating in an affluence that has rarely been rivaled, Great Britain faced a grim few years of near bankruptcy. Food rationing, begun in 1940, didn't end until 1954. As is often the case, out of hardship came art. In this case, it was the uniquely British Ealing comedies. And of all the films Ealing Studios produced during its heyday from 1948 to 1955, The Lavender Hill Mob is one of the best remembered.

Alec Guinness stars as Henry, a mild mannered bank clerk. A part of his duties includes overseeing a weekly delivery of gold bars. His superiors see him as a dependable, but unimaginative little fellow. What they don't know is that for years he has been dreaming of finding a way to rob one of the shipments for himself. He knows how to get the gold, but what stops him is that he doesn't know of a way to smuggle it out of the country so that it can be sold. Fortune smiles on him when he befriends a man who deals in knick-knacks who also owns a factory where gold could be melted down and hidden inside souvenirs. The gold could then be sent past customs, safely disguised as statues of the Eiffel Tower. Naturally enough, things don't go quite as smoothly as planned.

At barely an hour and 15 minutes, this is a movie that just flies by. There's plenty of laughs to be found and even a bit of comic action involving an extended chase scene. In one of the funniest sequences, Henry and his partner Alfred try to chase down six school girls who have each purchased one of the golden towers that were mistakenly put up for sale. After a giddy run down the spiral staircase of the Eiffel Tower, the pair chase the girls all the way to the port of Calais. Before they can follow the girl's onto their ship however, they must deal with the bureaucracy of customs, border control and the ticket office, all of which they patiently deal with in a very English manner, even as they frantically hurry to catch the girls.

Along with the humor and adventure, the movie is also a reflection of the time period. The class structure, which is hidden below the surface of modern Britain, is on full display here. Note the deference Henry shows to his superiors at the bank, not even looking them in the eye, but keeping his gaze cast downwards in their presence. He is as far below them as the two professional criminals he and Alfred hire to assist them are below him. Those two are cheery cockneys who are quite happy to let  Henry and Alfred sell the gold, trusting them to handle the money and thinking side of things.

Despite being quite English, the film did receive some attention in America. It won the Best Screenplay Oscar and Guiness received a much deserved Best Actor nomination. It's a light role, but he plays it to perfection.  Another actor of note appearing in the film is a very young Audrey Hepburn as an extra in the opening scene.

Released 60 years ago, this film is timeless and has left a lasting legacy. John Cleese, among others, was clearly influenced by it when he made A Fish Called Wanda. He even chose to get The Lavender Hill Mob's director, Charles Crichton to direct Wanda, despite Crichton being in his late 70s at the time.

Although just a light-hearted little comedy, The Lavender Hill Mob is in many ways a work of art. Its escapist storyline must have appealed particularly to the cash strapped English audiences at the time of its release, but it is still equally appealing today. 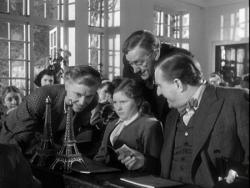 An anxious moment in an uproariously funny film.

I couldn’t agree more Scott. This movie is a comic gold mine (pun intended). It is thoroughly enjoyable from start to finish. It has plenty of laughs and even bits of genuine tension during the chase scene; in which you will find yourself wondering, will they or won’t they get caught? The scene Scott mentioned where Holland and Pendlebury are rushing to get on the boat to England and keep getting delayed is hilarious.

I also cracked up at the manner in which they go about looking for their accomplices. Since neither man knows any professional criminals they plan to meet some by going out in public crowds, like on a train, and talking loudly to each other about how the safe at Pendlebury’s business is broken and how he had to leave a large amount of money in it overnight. They then head to the business and await some thieves to attempt a break-in. It is very funny in a very British way.

As good as Guinness is as Holland, I preferred Holloway’s Pendlebury. He is given to florid speeches and has a penchant for quoting poetry to suit different occasions. One example is when he recites this poignant line from a John Greenleaf Whittier poem, “Of all sad words of tongue or pen, the saddest are these - it might have been.”

My absolute favorite moment of Pendlebury’s though is when Holland is explaining the robbery plan to him and he responds with a confident, “Edgar!” Holland: “I beg your pardon.” Pendlebury: “Err... isn't one supposed to say that when one is being briefed? On my rare visits to the cinema...” Holland: “The word is roger.”

This is considered to be Audrey Hepburn’s first major movie appearance. Although her scene is very short she radiates charisma in just a few seconds of screen time.

Like my brother I would call The Lavender Hill Mob art. It works equally superbly as both a comedy and a heist caper. You might say this movie is worth its weight in gold bars. 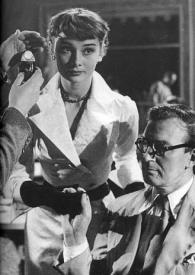 A star is born. Audrey Hepburn with Alec Guinness in The Lavender Hill Mob

It sometimes takes me a few moments to acquaint myself with the King's English. Their accents and some of their words are outright foreign. "Oh really! I can't make myself much plainer. Which hoodlums around here specialize in toby jobs?" Mrs. Chalk says to a couple of detectives. Toby jobs?

Mrs. Chalk steals all of her few scenes. I liked when Henry reads to her from a dime store novel, "I handed my fedora to a hatcheck girl with all that Venus de Milo had got and then more, and I was admiring the more when I glimpsed something in the back of this frail that set my underwear creeping up on me like it had legs." Although it is a reference to getting an erection, Mrs. Chalk ads, "I know that feeling well."

Scott wrote of it's influence on A Fish Called Wanda, while I also saw glimpses of The Producers, which is likewise about two hapless criminals. The scene where Holland and Pendlebury are on the Eiffel Tower talking of how the world is theirs was practically repeated with Zero Mostel and Gene Wilder standing atop a New York skyscraper, imagining the same feelings.

My favorite running joke is that Holland and Pendlebury keep running into the police. No matter where they go, a policeman seems to be there as well. When they follow the school girl, to get back a gold statuette, she of course goes to a police training facility and museum, filled with policemen. It leads to a police chase that Buster Keaton would have been proud of.

The ending was great and forced me to re-watch the beginning. How many movies have legitimate reasons for its audience to re-start the film as soon as it ends? The Lavender Hill Mob is truly a comic gem.