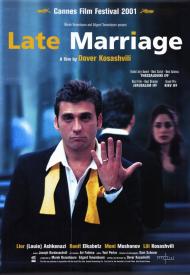 Do actors actually consider this work?

One of the most fascinating aspects of watching foreign films, for me, is seeing other cultures, traditions and attitudes.  Late Marriage is an Israeli romantic dramedy filled with all three.  The basis for the film is a tradition that a man cannot marry an older woman, especially a divorced one.

Zaza is a 31 year old bachelor, whose parents are eager to marry off.  They take him to visit many available girls and their families, in hopes that a marriage can be worked out.  At one girl's house, Zaza's mother places a love charm under the intended girl's bed.  She was given the charm, and told it was made by a famous Rabi, and that it was made from, "The foreskin of an 8-year old baby boy." ?

Zaza is already in love with a woman, Judith, that his family does not approve of.  She is a 34 year old divorcee, with a daughter.  Zaza's father describes her as, "A whore with a kid." The family knows of her, but they do not consider her significant until they decide the only way to get him to move on to a real prospective wife is to break them up.

In the movies best scene, Zaza's parents, uncles, aunts, and other relatives bust in on Zaza and his girlfriend playing her daughter.  The men sit Zaza and Judith down and attempt to talk "sense" into them while the women nit pick around the apartment, complaining about everything they can.  It is a funny scene, yet also very dramatic.  It ends with Zaza's dad slapping Zaza while an in-law holds a sword to Judith's neck. Late Marriage balances the humor and the drama very well.

The weirdest scene is when Zaza and his father are taking a piss in a public toilet.   A likely drunk Zaza looks over at his father's penis and says, "That's a nice dick you have, Dad."   They zip up and Zaza continues, "Dad, How I love your balls."  He then drops to his knees and starts kissing his father's crotch.  It is all done in jest as a "thank you" to his dad, but it is still an odd moment to take in.

I am not sure if the traditions in this film are part of Jewish culture or just that of the family depicted.   All of the players come across very real.  From an American's point of view, Zaza is a wimp.  He has a very hard time taking a stand when it comes to his parents.  I do not hold that against him.  It is not a character flaw so much as it is his character.  The ending is not a traditional romantic comedy ending.  I did not see it coming.  I will not give it away, but I would love to get another person's opinion on it.