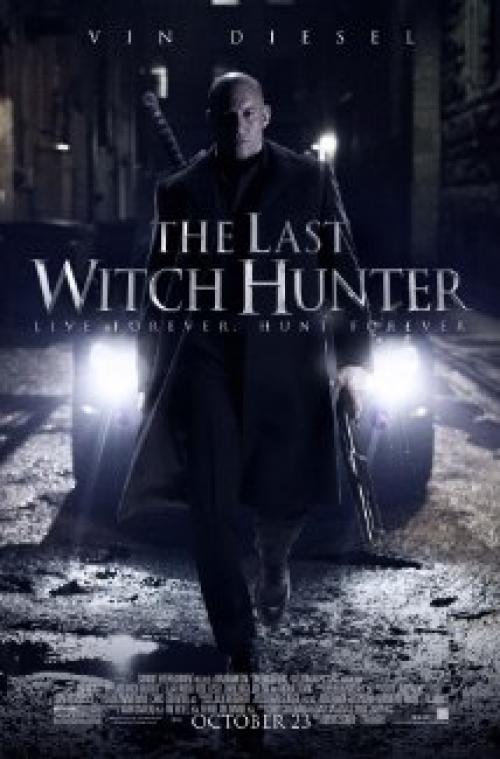 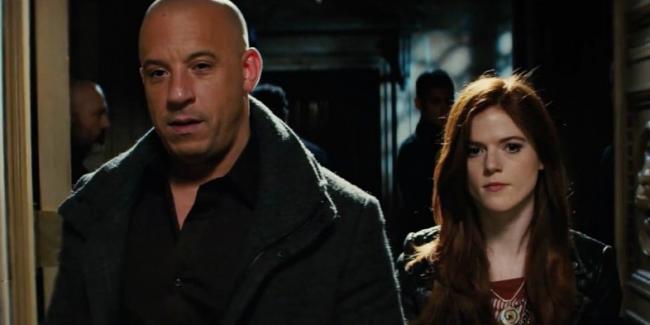 Vin Diesel and Rose Leslie in The Last Witch Hunter.

For this movie to work, it needed to do one of two things. It should either have played up the absurdity of the situation by keeping its tongue slightly in cheek, or it should have gone much, much darker and featured some sex and gore. Instead, the filmmakers decided to keep it very middle-of-the-road safe and a family friendly PG-13. The result is a generic urban fantasy with little to make it standout.

Vin Diesel stars as Kaulder, an 800 year old immortal witch hunter. In this world witchcraft exists and is regulated by the Catholic Church. Kaulder acts as the Church's enforcer, bringing to justice those witches who flout the terms of the treaty forged between the witches and the Church. Over the years, Kaulder has had a series of Handlers in the Church known as Dolans. When the film begins, after we've been brought up to date on the rules of this world, we learn that the 36th Dolan, played by a clearly slumming it for the paycheck Michael Caine, is retiring, to be replaced by the 37th played by Elijah Wood. When on the eve of his retirement, the 36th Dolan is attacked, Kaulder begins an investigation that leads him to realize the Witch Queen, who he believed that he had killed 800 years ago and who is responsible for his immortal state, isn't as dead as he thought and could be plotting another plan to wipeout humanity.

Reportedly, Diesel had quite a bit of input into his character. A well known fan of Dungeons & Dragons, Diesel based much of his character in the film on one of his D&D characters. Unfortunately, while this character might work in a role playing game, it doesn't feel like a good fit for Vin Diesel. Although far from a good actor, Diesel has always had an odd sort of charm that has worked for him in the Fast & Furious series and the Riddick movies. But that charm falls flat here. He lacks the range and never seems sophisticated enough to play this character. For all I know Diesel might be an erudite and urbane person in real life, but his screen persona is more suited for a streetwise thug. Although the Riddick movies have their own set of problems, that's the perfect character for his looks, build, and talents.

However, Diesel is far from the film's biggest problem. With the right script he might have been able to play this character effectively. It's too bad the three different writers it took to write this one weren't up to the job. It's a script that has been kicking around for awhile. Surprisingly, it featured on the 2010 Blacklist, which is a list of the most liked unmade scripts of the year.

In 2012, Timur Bekmambetov, the Russian director of the very stylish Urban Fantasy Night Watch and Day Watch films, was attached to direct. With his resume, he might have been able to do something with this movie, or at least made it look more interesting than the finished film does. He certainly couldn't have done less than Breck Eisner does, who fails to even hide the fact that despite its New York City establishing shots, it was clearly not filmed anywhere near the Big Apple (and was in fact filmed in Pittsburgh).

Caine's talents are mostly wasted as he spends much of the film in a magically-induced coma. Elijah Wood, whose character starts promisingly, makes a nice contrast to Vin Diesel, but he eventually fades out of most of the story and his end is a telegraphed in advance cliche. Rose Leslie, of Game of Thrones and Downton Abbey fame, adds a small amount of spark as the witch Chloe, but her relationship with Kaulder is never clearly defined. At times it seems that she was meant to be a love interest for the witch hunter, but the two never kiss and she ends up feeling more like a surrogate daughter.

I must confess I went into this movie with very low expectations. At most I hoped it might be something of a guilty pleasure that my inner teenage-boy, former Dungeons & Dragons loving self, could enjoy. Sadly, even without expecting much, the filmmakers still managed to disappoint me. The ending hints at a sequel, but given the lukewarm reception for this first film, it remains to be seen if that will ever happen. 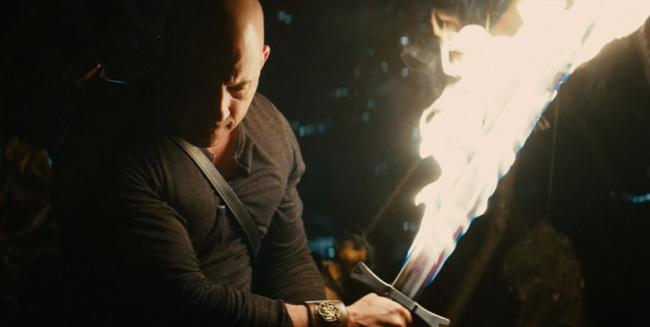 Sure, this is not a great film but I enjoyed it slightly more than Scott. This is a decent enough fantasy movie. Everything is at face value and it steals heavily from Highlander (1986) but it still has some entertainment to offer. The pacing, special affects (my inner D & D player was getting a boner over that flaming sword) and action scenes are there to distract you from the many questions that never get answered. Put this on and just enjoy it for the superficial matinee material that it is.

Kaulder is shown thinking about and pining for his long dead wife and children. It is supposed to make us feel sorry for him and in a very tiny way it works but not as well as it did in Highlander. Why though, has he not found someone else to love since? Connor did in Highlander, where it was explained that the battling immortals could not create offspring, while no such limitation is discussed here. An early scene shows Dolan # 36 waiting while Kaulder is having sex with a stewardess he just met. In 800 years of consummating relationships, Kaulder could have countless offspring. Even if he made the decision to not have more children, he still could have, and likely would have, fallen in love many times over the centuries.

With that said, the problem for me with this film is the character of Kaulder. He is a tough action hero type who heals almost instantly because of the curse/blessing. That is convenient for the fight scenes but does little for characterization. In fact, I never had much sympathy for him. He lives in a big beautiful apartment where he apparently has plenty of anonymous sex with random young ladies. He is wealthy, has a best friend and an extremely exciting life.

The audience is expected to feel sorrow for Kaulder because he long ago lost the things that matter most emotionally to him and because he is now living a very long life of servitude to a bunch of people he will watch grow old and die. He claims to Dolan #36 that he was his best but it is likely something he has said to every Dolan. If it were true, it would have been nice if the movie had said why, in fact, he was his favorite. Vin Diesel is an actor with charm and screen presence but he, and the script, never truly bring Kaulder to life.

So often have I watched Highlander that to this day, I can still hear Christopher Lambert giving his alibi to the policeman interrogating him, "Madison...Square...Garden." He gave Connor a very distinct voice. "Where you from Nash?" the officer continued, to which Lambert responded, "Lots of different places." Vin Diesel likewise has a memorable voice. However, I will never watch The Last Witch Hunter as often as I did Highlander, so such lines as, "Do you know what it's like to live forever?" will never become stuck in my head in the way that lines like, "There can be only one." did. 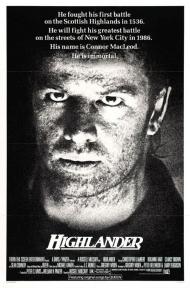