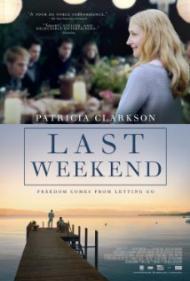 Last Weekend was filmed entirely at Lake Tahoe in Northern California. As the title suggests, it tells of an affluent families' final weekend spent at their lake home. Patricia Clarkson, as the mother, is the central character. All of her carefully laid plans for a perfect family get together soon go awry when they come up against the formidable combination of fate and dysfunction. The script attempts to combine humor with all the drama but it's only partially successful.

The Greens are members of the 1%. They are portrayed as having more money than they can possibly spend. They have two grown sons, neither of whom comes home to visit their parents often. Theo is the older son. He's gay, lives in New York City and writes for a television series. He brings his new boyfriend, as well as several other friends, home with him. These include a male/female couple and the star of the television series, played by Jayma Mays. Roger is the younger son. He's straight and he's accompanied by his longtime girlfriend. Other characters include several neighbors played by such familiar faces as Judith Light and Mary Kay Place. Finally, there is the Mexican couple, Hector and Maria, who work as domestics for the Greens.

The setting is a bit reminiscent of On Golden Pond. It takes place over Labor Day weekend of their final summer in the old vacation home. The similarities end there however. The Greens aren't likable people. In fact the point of the movie seems to be to show very rich, white Americans as empty and soulless. Clarkson, as Celia Green, is shown to be greedy and thoughtless. She obsesses over the price of mundane household items then turns around and spends money extravagantly on useless purchases. She treats her hired help as subhuman, only going through the motions of caring while really worrying more about what the neighbors might think. She is a sad, lonely woman but I never really gave a shit about her. Clarkson is terrific in the role though.

The gay son is just as shallow and materialist as his mother. His boyfriend, who is decidedly middle-class, attempts to open Theo's eyes to the real world but by the end of the weekend it hardly seems likely that they'll stay together. Younger son Roger is the more sympathetic sibling - although he's not without his flaws. He has just been fired from his job due to a clerical error that cost his company millions of dollars. He lives in his financially successful father's shadow. The father is kept mostly in the background and isn't given much personality to speak of.

One refreshing aspect to the movie – and one that my brother Eric may appreciate – is that it remains politically neutral. At least as far as the Greens are concerned. The father probably votes republican (although it never says) but Celia is portrayed as a dyed-in-the-wool liberal – she fancies herself a bit of a hippie.

If the point of Last Weekend is to show that even the very rich have problems it is again only partially successful. Most of their problems are psychological and of their own making. They live completely self-absorbed lives in their lavish cocoon. They have the luxury of obsessing over trivial matters since they never have to worry over the day to day struggles for survival the other 99% of humanity has to deal with. Despite the talents of the cast, I thoroughly disliked the Greens. Perhaps that's the point of the movie? If so, then mission accomplished. 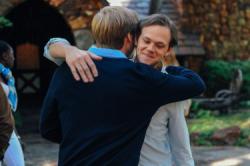 The point of this film is not to dislike the Greens. Sure, some of their concerns seem superficial to us but our concerns likely seem trivial to people in third world countries. It is all relative. Patrick, your class envy went into over drive when your watched this. Yes, the Greens have lots of money but at no point did I think the film makers were trying to say that very rich, white Americans are empty and soulless.

My opinion of Celia Green is not exactly the same as Patrick’s. I never thought Celia was being shown to be greedy and thoughtless. Yes, she seems to be pinching pennies one minute then buys crap she has no need or use for the next but that has nothing to do with being greedy. She does not treat her hired help as subhuman. She and the rest of her family call them by their first name and spend time in the hospital waiting to hear how Hector is doing after he was electrocuted.

The only thing I agree with Patrick about Celia is that she is sad, but I did give a shit about her. Celia has everything one could want financially yet Celia feels like she is losing the most important part of her life, her sons. Some of her best memories are the ones spent at the vacation house on the lake. Her sons do not come around as much anymore and she plans to make this last weekend on the lake one to remember.

At first, I thought Celia was being self-centered on the way home from the hospital, when she says aloud, “Damn it, I missed the sunset.” Later, we see that she takes pictures of the sunset every summer she has spent there. I found that the point of the film is that, although Celia has all the money one person could want; her life has lost its purpose. She seems scatter brained, not knowing what to do with her time or money.

She wants to be part of her sons lives but she has no clue how to do it as they are outside her sphere of influence. She has no real relationship with Roger’s girlfriend, telling her she does not need her help in the kitchen. She cries when she hears Luke sing, because she forgot to ask him to. Her sons have become men she does not fully relate to.

She holds onto the past all the while knowing that she must sell the house so that she can let go of it. When her sons leave she says to Theo, “I feel like you just got here. There is so much we did not talk about.” The weekend did not go as Celia planned but she did come to terms with the fact that her life has changed and so she must change with it.

Where I agree completely with Patrick is that Clarkson is terrific in the role. She is very believable as a woman who concerns herself with pointless details. With her sons gone she has little to do and seems to have lost her focus. She does not always have the best of manners, such as her feigning appreciation for the jellies brought to her by Theo’s friends.

Another way I agree with Patrick is that this is a two star film. Some of the acting by the supporting players is horrible. The writing is almost as thoughtless as Celia. What the hell does the scene of Roger jacking off to the magazine photo of the visiting actress have to do with anything? Last Weekend is not at all about a rich family living completely self-absorbed lives in a lavish cocoon. It is about the change in a family and the mother who comes to terms with it. If only the writing and supporting players could have kept up with Clarkson.