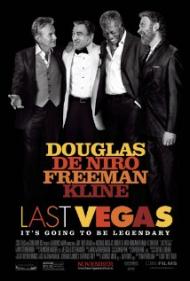 Last Vegas is a perfect example of lazy film making. Aptly described as a senior citizen’s Hangover, it is utterly pointless and lacks a single laugh inducing moment. The four leads add nothing to the proceedings, leaving the entire experience a near waste of time for all who made it and all who watch it.

Three old friends since childhood, played by De Niro, Freeman and Kline, gather in Las Vegas to celebrate their old friend, Douglas, getting married. They drink, stare at hot women and resolve a feud. They gamble and meet a woman near their age, which sparks a romance. They pretend to be mobsters to scare an obnoxious young man. Very little of what they do is actually interesting or entertaining.

Morgan Freeman fares best but that does not say much. The previews already gave away his two best moments, when drunk in the club and sneaking out his window. My favorite scene in the entire film is when the old men’s bachelor party meets a bachelorette party of twenty something women. When the young bride to be finds out that Douglas is marrying a 30 year old girl, her matter of fact statement to him, “You must be really rich.” is the movies most honest moment.

Robert De Niro must be working on his retirement fund as he has appeared in so many horrible films lately. As has been noted on this site in other reviews, this guy seems to take any crappy role that comes his way. Does he even read the scripts before accepting these parts?

The only possible reason to watch this film is the curiosities of seeing four old Hollywood luminaries interact. However, the presence of movie stars alone goes only so far, which is to say, not very far at all. Last Vegas needed better writing and direction. This is the kind of film that wants to make us laugh and sigh but fails on both accounts.

At the very least, we should have garnered some inspiration from these old men. They could have demonstrated that there is still an exciting life worth living after retirement. The moral lesson is intended to be about the value of friendship but the only lesson we get from this story is that it is good to be rich when you are old or convenient to win big at a casino table.