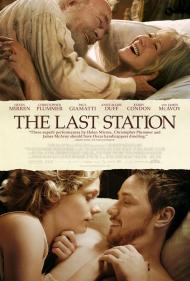 Christopher Plummer and Helen Mirren in The Last Station.

One of the many things I enjoy about watching movies is when you learn something about a time, a place or a famous person that you never knew anything about. With The Last Station I learned a thing or two about Leo Tolstoy; someone whom I knew nothing about beyond that he was Russian and wrote War and Peace amongst other novels. He seems, as presented here anyway, as a very interesting character. In fact he seems more interesting as a person than this movie does as a whole.

Christopher Plummer stars as the famous author and Helen Mirren plays his wife. Together they make a formidable acting pair and the two of them get to chew up the scenery together. In some ways I was reminded of Peter O'Toole and Katherine Hepburn in The Lion in Winter. You have an aging married couple who are sparring back and forth played by two actors of immense talent. Where this movie differs vastly from The Lion in Winter is in the writing. Where The Lion in Winter cuts deeply with sharp daggers of dialogue, The Last Station merely scratches the skin with blunted weapons that do no real damage.

The story takes place at the end of Leo Tolstoy's life. After being a celebrated author Tolstoy now has a following that is almost religious in nature. Chertkov, the leader of his following, wants Tolstoy to leave the copyright to all his work to his group so that the money can (in his words) benefit all mankind. Just how this would be executed and who exactly it would gain beyond Chertkov is not really explained. On the other hand you've got Tolstoy's wife, the Countess, who wants to ensure that her children's legacy is left intact by making sure the rights to her husband's work remains in the family.

Tolstoy is shown to be a bit of a contradiction. He sounds as though he led an interesting life as a young man and was rather wild in his way. He's also quite rich when the movie takes place and he lives quite well in pre-communist Russia. And yet he writes about and speaks about opposing private property and equality for all. It doesn't stop him from employing servants, but he talks about it a lot. When and why he started feeling that way isn't explained. And just why Chertkov has such a sway over him isn't revealed either.

Certainly the best scenes in the film are those featuring Plummer and Mirren together. Both have been nominated for Oscars for their performance here and deservedly so. Mirren is especially good as the overly dramatic wife. Together they both make the material better than it has a right to be. James McAvoy is likable enough as Tolstoy's private secretary from whom the story is ostensibly, if not exclusively, told, but this is Plummer and Mirren's film.

I learned from watching this movie that Tolstoy was indeed an interesting figure and a great movie could probably be made about his life. While this is a good movie, thanks mainly to its leads, it's not a great one. With a better written script filled with sharper dialogue it might have been, but that's just not the case. 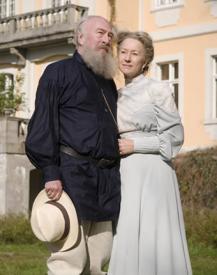 The Last Station is first and foremost a love story.

Yeah that’s pretty much my take as well, great acting, fascinating central character, nice cinematography, with a script that is only so-so. Mirren gets the juiciest part by far. Her countess is passionate and volatile in her love for Tolstoy. The scene where she discovers he has left her is powerfully done. She stumbles blindly down to the river’s edge and then rolls off a dock into the water. She also provides some comic relief like in the scene when they are eating dinner outdoors and she tells his sycophants to stop writing down every word her husband utters.

As a child I always wanted to read War and Peace. I haven’t yet managed that but I am in the middle of reading Anna Karenina so it was interesting to hear the few references to that book made by the countess.  The title of this movie is an allusion to the importance of train stations in that novel.

Tolstoy’s reputation as a writer is absolutely deserved and well-known. Not so well known today is the Tolstoyan belief system he created. His following is not almost religious, Scott, it is most definitely a religion. He set up communes to achieve a utopian vision of society. He preached equality as well as celibacy.

Scott I agree that he was contradictory in some things, but the reason he kept his servants was because his wife insisted on them. He would have let them go on his own. And though the movie tries to be fair in dealing with the struggle for Tolstoy’s affections and attentions (not to mention his wallet) between his wife and Chertkov it clearly favors his wife. This makes sense since The Last Station is first and foremost a love story. 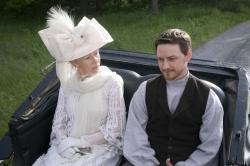 Scott, Tolstoy is definitely shown to be a contradiction.  As Patrick noted, "He preached equality as well as celibacy."  Sofya points out to Valentin that Leo got laid all the time when he was Valentn's age.  It is hardly a commitment to declare celibacy in old age.

Although Leo's socialist mindset is hypocritical, his biggest mistake was being taken in by Vladimir Chertkov.  Leo was a huge egomaniac.  He allowed men to follow him around taking notes on his every word.  Chertkov fed his ego and Leo ate it up.  Where his wife challenged him, Chertkov treated him like the second coming of Christ.  As Valentin says to Chertkov, "You want to create an icon and you want people to kneel in front of an image that you create."

Is it not interesting that the world's noted socialists all have strong political and social opinions yet have never worked for a living.  Karl Marx never had a job.  He lived off of other people providing for him.  Tolstoy was born to an aristocratic, wealthy family, as was Chertkov.  Vladimir Lenin was born to nobility and very briefly worked as a lawyer.  Barack Obama went to private schools and elite colleges on grants.  Other peoples money got him elected.  These people claim to be of and for the worker but they themselves have no inkling of what working for a living is even like.

Two kinds of people follow the Tolstoys, Marxs, Lenins and Obamas of the world?   Some young people breaking away from their parents are still in need of direction and find comfort in someone making sound bites about equality and hope.   The other group are people of some means who feel guilty about their station in life and decide that claiming to have liberal ideals will rid them of that guilt.

Valentin is the typical confused young man, taken in by the ideals of an inflated ego.  He and the other youths living there never complain that Leo lives in the mansion, being waited on while they split wood and work in the fields.   It is the common thread of socialism.  The leaders of it speak of equality while their actions are anything but.

Leo Tolstoy, as shown in this movie, was like so many celebrities today, being used by someone else to further their agenda.   Also like modern celebrities and politicians, Tolstoy is portrayed as an arrogant hypocrite.   I am not sure how close this is to his actual personality, but it seems in step with the rest of the worlds socialists.