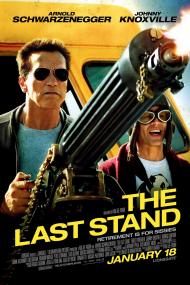 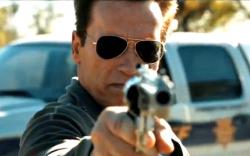 He's back! Arnold Schwarzenegger takes aim in The Last Stand.

The Last Stand, from successful Korean director Kim Ji-woon and aging American action star Arnold Schwarzenegger is so laughably bad it's almost good. The formulaic plot is so predictable the dialogue practically writes itself. It features several groan inducing one-liners spoken by Arnold in the middle of action sequences, such as at the end of a prolonged bloody shoot-out in the middle of town when he tells the bad guys, “Welcome to Sommerton!” And then later when the main villain asks incredulously who he is, Arnold replies, “I'm the sheriff.” These lines are intended to cause cheers but the only reaction they induce in the audience is pity and an uncomfortable chuckle.

The by-the-numbers storyline has an escaped leader of a Mexican drug cartel being chased by the FBI from Las Vegas to Mexico. His overly elaborate escape route goes straight through the sleepy little town of Sommerton Junction, Arizona. The FBI, as portrayed in this film, is totally inept. Despite a very large force of agents there to escort him between jail cells, the villain is easily able to break free and elude the authorities in his souped-up corvette. Of course he didn't count on Arnie and company standing between him and his freedom that lies just across the border.

One obvious problem with the movie is that it has an uneven tone. At times it seems to get that it is just a silly action movie with lots of gunfights, car chases and explosions. But at other times it tries to be dramatic, most noticeably when it tries to make the audience care about the death of one character in particular. These scenes are so out of place, the acting so bad, and the dialogue so contrived that it could only have been directed by someone whose first language isn't English. Come to think of it that also describes the movie's haggard looking star.

The supporting cast boasts such talents as Forest Whitaker as the head FBI agent, Luis Guzmán as one of Arnold's deputies, and Harry Dean Stanton in a cameo as a tough old farmer. Despite his prominent billing on the poster, Johnny Knoxville is wasted in a small part as the owner of a rare gun museum that just happens to be located in this blink-and-you-miss-it town.

Some of the action scenes are fairly well-staged, in a cartoon violence kind of way, but this movie is unintentionally funny when it tries to be serious and falls flat when it goes for a laugh. The Last Stand should be a last resort for moviegoers. Trust me it really is that bad.

Arnold Schwarzenegger in The Last Stand.

As Patrick wrote, this movie is so awful that it's nearly entertaining. I was immediately reminded of the 1990s when Eric and I would watch Jean-Claude Van Damme movies and get more enjoyment out of making fun of them than we did out of actually watching them.

Schwarzenegger must have been so anxious to star in a movie again that he just agreed to make the very first script sent to him. I can think of no reason beyond a paycheck that anyone would agree to star in this thing after reading it. The cast is fine and filled with recognizable faces. There's not actually an over abundance of action scenes, but they are filmed well. Director Kim Ji-woon keeps things moving along fast enough.

It's the writing that isn't up to the task even with three different writers credited with working on the script. It's filled with cheesy dialogue and implausible situations that require a major suspension of disbelief on several occasions. Every action is clearly telegraphed well ahead of time. To be surprised by anything in this movie you'll need to have never seen a movie before or be under the age of 10, or possibly both.

Although it wouldn't have saved the movie, I think it would have helped the story if it had been set at least 25 years in the past, or possibly longer. A good portion of the story is about tracking a speeding car, but with today's instantaneous communication technology, it wouldn't seem that hard, especially when the car that's being tracked stays on the same highway for the entire trip. The movie wants to be an old school action film anyway, so why not set it in an old school era.

I doubt we've seen the last of Arnie and this movie will just be a blip on his road to a comeback. He just needs to be a little more circumspect when choosing his films. Reading the script before he signs the contract would be a good place to start.

Johnny Knoxville and Arnold Schwarzenegger in The Last Stand

I agree with what Patrick wrote, The Last Stand is predictable. Do you think Ray getting the keys to a sports car early on in the film will come back later into the story? It likewise has more implausible situations, as Scott wrote, than you can count. When Cortez is getting rescued by a magnet crane, none of the CIA agents think to get to the crane controls. The most over-the-top scene is when Cortez takes out two other vehicles while speeding backwards on a highway.

Replace cars with horses and The Last Stand would play like an old western film with Arnold Schwarzenegger making like John Wayne. Sheriff Ray is old yet still man enough to handle some south of the border criminal. The difference is that Wayne had better writers. Schwarzenegger is saddled here with such sophomore dialogue as, "We are not going to let that guy come through our town without a fight."

Like so many Wayne films, Ray is helped by some younger cast members. It is all too obvious which one of his three deputies will bite it. Johnny Knoxville is around for comic relief but has little to actually do but supply guns and act slightly crazy. "Vicky? She's my little Nazi-killer. 1939 Vickers gun. My little crazy bitch." Again, who wrote this?

I too recall watching and enjoying bad Jean-Claude Van Damme films with Scott. Patrick and I did the same with the horrendous remake of Flight of the Phoenix. With that said, I watched The Last Stand with my 17 year old and through him, I enjoyed it more than I probably should have. Sure, there are lots of plot holes and a story line that is less complicated than an episode of Gilligan's Island, yet it can still be enjoyable under the right circumstances. There is enough action to distract you from the flaws. You will not forget they are there, but the action will help you excuse them.