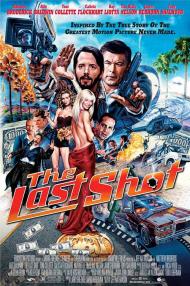 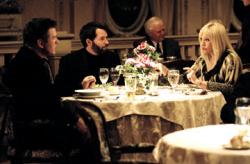 The Last Shot is a pleasant little movie that isn't nearly as funny as it could have been. Featuring a talented troupe of actors led by Alec Baldwin and Mathew Broderick, it feels restrained, content to elicit chuckles when it should have gone for belly laughs.

Supposedly based upon a true story, although I have no idea how much of it is true, it tells the story of an FBI sting operation to catch a smalltime mobster in Providence Rhode Island. The idea being that Agent Joe Devine (Baldwin) will pose as a movie producer and attempt to get mobster Tommy Sanz (Shaloub) to accept a bribe to assist the film crew in getting the Teamsters Union to cooperate in the making of the film. In order to make his role as authentic as possible, Devine procures a real script, a director, and a cast, all of whom have no idea that the movie they're making isn't a real movie at all.

Broderick plays the first time director who's certain that he's just scored the biggest break in his career. He's so excited at the opportunity to make a movie that he doesn't object too strongly to any of Devine's odd demands, including moving the movie to Rhode Island, despite the fact that the title and the setting of the script are Arizona.

There are some funny moments in the movie. Although it might not sound funny, there's an amusing moment near the beginning of the film when Devine's dog commits suicide by throwing herself into a Jacuzzi. “She tore up the roses went to the bathroom on the kitchen floor," his maid tells him when he returns home. "I think it was her note." And Joan Cusack does a very funny near-cameo appearance as the real movie producer who shows the agents what it takes to act "Hollywood".

As the leads, Broderick and Baldwin play well together. Baldwin plays the aging agent looking for a break to get promoted while Broderick does his nice guy in over his head shtick that he's done in so many films before. The supporting cast is where most of the really funny jokes come from. Apart from Cusack, the movie features Calista Flockhart, Toni Collette, Ray Liotta, Buck Henry, and Tony Shaloub, all of who shine in their varying roles.

A lighthearted, amusing little movie, The Last Shot just isn't funny enough to demand seeing on the big screen, although it may find life on DVD and late night cable channels. 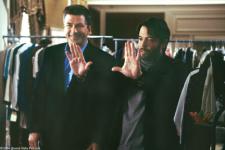 The plot is secondary as the dialogue takes center stage. The Last Shot has some truly funny lines, and none are telegraphed. They roll off the actors tongues like ordinary conversation.

Several actors have a paragraph of dialogue. Joan Cusack does have a good one, but Collette has a funny soliloquy where she talks about her past and has this dark line about an abortion, “The truth is, I was blackballed in Hollywood, because the great Jed Walker claimed that the baby was his, that I had murdered his baby in the fifth month, which, if you had seen it, it clearly was not.”

Matthew Broderick is good here as a man who is very happy and surprised to see his dream come true, only to later have it shattered. It is interesting that Broderick got his start in movies playing characters that lived by their own rules, but now in middle age, he only plays losers.

I despise Baldwins politics but he is a great straight man, and completely makes this movie. Joe casually throws all kinds of curve balls at Steven. When it is discovered that his fake name is already in use, he just changes it, “But you said it was Diamond.” Broderick questions him. “No, it's Wells. It's always been Wells. It's a common mistake.” Baldwin assures him. When Steven asks Joe how it is he has seen people die, Joe responds, “I use to produce music videos.”

As a movie about movies, it has a great moment near the end when the two men sit alone in a Graumans Chinese theater, and Broderick uses his megaphone to tell the projectionist, named Sam, to play the reel again. If you are a true movie buff, you know exactly what I mean.