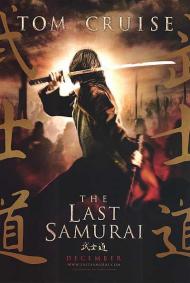 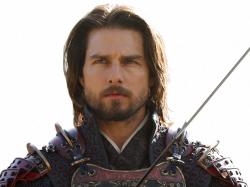 Tom Cruise in The Last Samurai.

The Last Samurai is beautifully shot. From a visual standpoint, it's beyond reproach. If it was merely shooting for a beautifully filmed action movie, it could have easily reached its goal. However, it tries to be a thinking person's action movie, and sadly if you stop to think too much about this movie, it begins to unravel.

Tom Cruise plays Captain Tom Cruise, formerly of the American army, but now a fulltime drunk/part time pitch man for Winchester rifles in the late 1800s. Ok, so his name really isn't Tom Cruise in the movie, but I've never been able to separate Tom Cruise from the characters he plays, he's just Tom Cruise in a costume. For the record, his real name in the film is Nathan Algren.

Cruise is hired by a Japanese official to come to Japan to train Japanese soldiers in the art of modern warfare. He accepts the job strictly for the money, and despite the fact that his old commanding officer, whom he hates, is also coming along. Just why the Japanese would want to hire this drunkard is a little sketchy. Surely, there must be other soldiers available.

The necessity for training soldiers is due to the uprising by a group of Japanese traditionalists, led by Samurai Katsumoto. The Samurai, clinging to the old ways and customs, want to prevent the westernization of their country.

While it wouldn't seem too hard for thousands of men armed with rifles to defeat a few hundred guys using only swords and bows and arrows, Omura (the Official who hired Cruise, and the movie's official bad guy), makes the mistake of sending Cruise and his newly trained men into battle, way before they are ready. The resulting battle, which is set in the woods, where the Samurai can take full advantage of cover, is a crushing defeat for the modern equipped army.

Cruise is captured by the Samurai and taken to one of their villages. He spends the winter in the village where he begins to learn about the Japanese culture. Before you can say, "Dances with Wolves", Cruise is wearing a kimono, meditating and wielding a sword with the best of the samurai. Hollywood never fails to try to prove that there isn't a culture in the world that an American can't walk into, spend a little bit of time, and end up surpassing the natives.

The result, as you can probably guess, is that Cruise ends up fighting with the Samurai when the inevitable final battle occurs.

A great deal of time is spent in this movie talking about honor, how it is a forgotten word and how the Samurai exemplify that word. The way I see it, it's very easy for them to have honor. They are the landed gentry of Feudal Japan, with all the time in the world to train to fight and meditate in their gardens. The men they are fighting against; the so-called modern army, are just a bunch of draftee peasants with a rifle slapped in their hands. Where's the honor in slaughtering a bunch of guys who probably didn't want to be there in the first place?

In truth, this is a Japanese tale with a starring role for a big American movie star slapped on top of it. Katsumoto is loosely based upon the Samurai Saigo, who did fight against the modernization of Japan. He is the actual Last Samurai, although this movie appears to be giving that honor to Cruise. And the filmmakers probably assumed that a movie like this, without a big name star, wouldn't fare so well at the box office.

At two and a half hours, this movie could have been trimmed slightly. The fight scenes go on too long, with some of them being shown twice, once at normal speed and then again in slow motion, like an instant replay. What's that about?

Entertaining at times and beautiful to look, The Last Samurai just fails to gel into the classic it seems to be striving to become.

Ken Watanabe and Tom Cruise in The Last Samurai.

As Scott said Tom Cruise is always Tom Cruise. He is such an icon as a movie star that he can never completely escape his own image. This is not to suggest that he cannot act. He is very much capable of conveying emotion, most notably anger. And although I think his persona fits better in a modern day setting he does manage to create a larger-than-life character in this movie. Therefore I disagree with Scott's questioning of why the Japanese leaders want him to train their soldiers. Yes he is a drunk but he is also an Achilles-like warrior. Believable or not Nathan Algren, in spite of his drinking, is shown as a man with amazing speed, strength, dexterity and courage before he even sets sail for Japan. The fact that he is able to learn the samurai fighting technique is acceptable if you accept the very existence of the character.

I do agree that the movie goes out of its way to show the samurai warriors as perfect heroes and pretty much all other military leaders as evil. There is no middle ground here, you are either honorable or dishonorable.

Despite this rather simple view of the world Last Samurai is entertaining. It is easy to let yourself get caught up in the dramatic sweep of the story. It is one of the most beautiful films to look at and there are plenty of heart-thumping action scenes featuring some great sword fights.

The ending is a bit disappointing. I would have preferred seeing Algren die on the battlefield with his comrade-in-arms. Seeing him head off into the sunset lessens the emotional impact.

Not a horrid movie by any means but a bit too long and a bit too self-important. 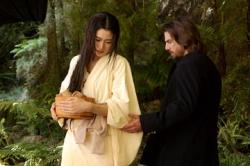 Koyuki and Tom Cruise in The Last Samurai.


The Last Samurai is like a big air balloon. At first, they are beautiful to look at, but after a while you get bored. Eventually you realize it is just nice decoration surrounding a lot of hot gas, moving along at a slow and predictable pace.