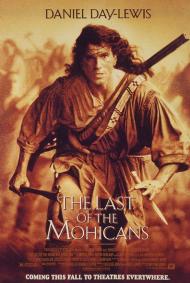 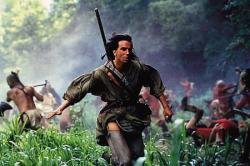 Based on the classic adventure novel written by James Fenimore Cooper. This is an incredible, historical action movie. From the opening scene of hunting deer with muskets to the final battle on the cliffs.

The action is pretty much none stop, but there is also a love story. Hawkeye, Daniel Day-Lewis, and Cora, Madeline Stowe, fall in love while running from or fighting Indians. No doubt if you have already seen this movie then you must recall the famous 'No matter what happens, I will find you.' scene behind the waterfall.

Daniel Day-Lewis is an amazing actor. You would never recognize him in this film as the same guy in My Left Foot, in which he won an Oscar. Madeline Stowe pretty much fills the bill here as damsel in distress, however she does have a very good scene where she lectures her British Colonel father on 'sedition'. Wes Studi as the Indian 'villain' here is very good and his comeuppance scene at the hands of the last Mohican is fierce and exciting. 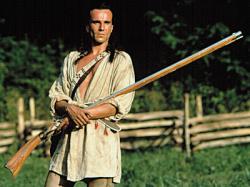 The Last of the Mohicans is one of those movies you must see on the big screen or at the very least in Letterbox Format. Forget your prejudice of those black lines on the top and bottom of your TV screen and just watch the beauty of this movie. Filmed in 70mm Panavision, this is a visually lush movie, that is a treat for the eyes and also, as Eric mentioned, a great movie filled with action and passion set against one of this country's most interesting historical periods.

And yes, it is based on the so-called classic novel by James Fenimore Cooper, but unlike the book, the movie is interesting and enjoyable.

This is one of those movies when the drama is over the top and a tad melo-dramatic, but it works here. The canvas against which this movie is painted, is so large, that the actors are almost required to play it larger than life.

The ending of this movie is my favorite. Barely a line is spoken during the last fifteen minutes as Hawkeye and his Mohican father and brother chase down Magua and his band, leading up to the climactic battle on the cliff path, and words aren't necessary. The action, the music, and the vistas carry the moment.

One of those movies that is often shown on the cable movie channels at odd hours, The Last of the Mohicans is one that if you haven't seen it yet, you definitely should. 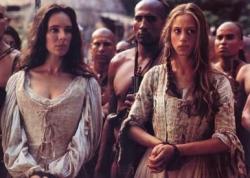 Madeline Stowe and Jodhi May in Last of the Mohicans.

Since by now we all pretty much agree that our most interesting and entertaining reviews here at Three Movie Buffs are when we disagree about a movie. I thought it only natural to watch this one, which I had never seen before, with an eye towards spotting some angle on which to tear their reviews apart. I really couldn't find one; in fact by about twenty minutes into it I had stopped trying.

They were both right on the money.

The Last of the Mohicans is a brutally violent action movie featuring passionate larger than life characters in a brilliantly filmed epic setting. This third major Hollywood version of the Fenimore Cooper novel gets just about everything right (The first was the critically acclaimed 1920 silent version and the second was the 1936 re-telling from which this third one borrowed much of the dialogue).

The fight scenes between the British and French colonials and their Native American allies are some of the best hand to hand combat scenes in any movie. They are graphic and realistic without falling into the Oliver Stone trap of confusing super fast editing with realism, like he did with the football scenes in Any Given Sunday. More recently Ridley Scott used this same misguided technique during the battle scenes in Gladiator. Just because a scene can now be shot from every conceivable angle doesn't mean it should.

The Last of the Mohicans was made at just the right time. The level of realism in film had attained an all-time high but had not yet reached the modern trend of extreme-to-the-point-of-silly hyper-realism (can anyone say Pearl Harbor?) that will most certainly seem dated in a few short years.

This movie plays like an epic, yet it clocks in at less than two hours. Every scene is necessary and to the point as great filmmaking should be. Color this one a classic.