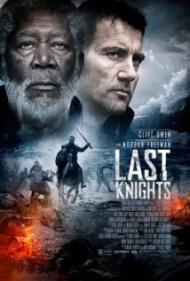 If the popularity of HBO's Game of Thrones has proved anything it's that there is an audience for adult fantasy stories.With its big name cast, serious storyline and visuals that at least look good in the trailer, Last Knights seems to be aiming for a similar market. Unfortunately, its dull and predictable plot is told at a glacial pace and is filled with inane, stilted dialogue that no amount of stars can make entertaining.

The story is simple and yet it takes 2 hours to unfold, despite it being completely obvious where it's all headed almost from the beginning. Clive Owen stars as Raiden, a military commander in the service of Lord Bartok (Freeman). Raiden is a member of an order of knights who swear an oath of absolute loyalty to their liege. When Bartok is betrayed by Gezza Mott, the emperor's advisor, Raiden and his men are disbanded. Gezza worries that Raiden and his knights will seek revenge, and we the audience know he will, but first we have to sit through an hour of Raiden moping around in scene after dull scene. By the time the action filled climax happens, any interest in the outcome is long since drained away.

Owen looks the part and he certainly gives it his best try. He plays Raiden with an earnestness that for a time helps elevate the material, but not for long. Freeman brings his usual gravitas to the character of Bartok and his naturally resonant speaking voice almost manages to make the poorly written dialogue sound significant. His is one of the few American voices that sounds fine in a fantasy setting. The rest of the cast contains a few recognizable faces, but none of them have much depth to their characters. Norwegian actor Aksel Hennie plays Gezza, the film's villain, but he's such a walking cliche that he never rings true and is more campy than frightening.

The cast is comprised of such a wide range of international actors that it makes little sense. The country where the story takes place seems to be in Europe and was in fact, filmed in the Czech Republic, but the citizens of the country are Caucasian, oriental, Asian, African, and everything in between, each of them with their own accents. There are so many different nationalities that it becomes ludicrously close to a United Colors of Benetton ad.

At the very least you might be hoping for some action, but again you'll be disappointed. It opens with a brief battle scene and finishes with a longer one, but the middle 90 minutes features lots of talking and very little else. And given the quality of that talking, I can only assume that English isn't the writers' first language. Or at least I hope so, since that would at least be some sort of excuse.

There's definitely an audience for quality fantasy stories, but this isn't one of them.