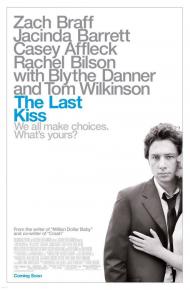 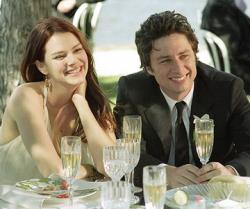 Jacinda Barrett and Zach Braff in The Last Kiss.

Zach Braff, of Scrubs and Garden State, who seems to have become the representative for his generation, stars as Michael, a man about to turn 30 who suddenly sees his whole life laid out in front of him. He and Jenna, the woman he's living with, are about to have a baby and she's talking about marriage and buying a house. This is a prospect that fills him with dread, not because he doesn't love her, but because he sees his youth slipping away from him. Unfortunately, you have to pick most of that up from the script and not from Braff's performance, which, contrary to his normal charming performances, is dull to the point of being comatose. He gave the same type of performance in Garden State, but there he had the excuse of his character being doped to the nines.

Michael's buddies are also going through crisis of their own. Chris (Affleck) and his wife have a baby, which was supposed to bring them closer together, but is instead driving them apart. Izzy has broken up with his girlfriend and is not taking it very well. Kenny, the most free-spirited of the group is still serial dating, but comes to see that his life is going nowhere.

Adding to the relationship confusion are Jenna's parents, played by the always great Tom Wilkinson and Blythe Danner. Her mom is looking for a spark to their decades old marriage, while her dad is a repressed therapist who refuses to acknowledge there is a problem. While their relationship is as depressing as everyone else's, at least these two can act. Wilkinson, in my opinion, does the best American accent of any British actor working today. It never sounds forced or over-stressed.

At a friend's wedding, Michael meets Kimmy, a college student who flirts with him and adds to his confused state of mind regarding his current relationship. He goes on a date with her, thus threatening his current situation.

The women in the movie are given the short shrift in the story. Kimmy, Jenna and the various other female characters are never given much depth, as this is a story clearly about the men. Only Danner manages to give her character any real depth.

The worst thing about this movie is that it is being marketed as a comedy. The previews certainly are slanted that way. And while there are a few laughs to be found in the movie, it is most definitely not a comedy. It is so depressing in fact, that along with soda, popcorn and candy, theaters showing this movie should also stock up on Prozac and give away free samples to every ticket holder.

On second thought, I don't think The Last Kiss will start a whole new genre, because who goes to the movies wanting to be depressed?