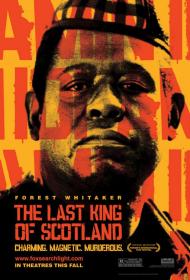 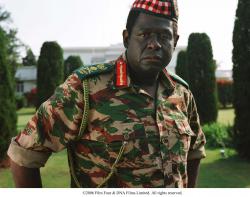 Forest Whitaker as Idi Amin in The Last King of Scotland.

The Last King of Scotland is not a great movie, but the performance by Forest Whitaker is fantastic. Like past years when Capote and Monster, also not such great movies, propelled Phillip Seymour Hoffman and Charlize Theron to award season glory, this movie is likely and deservedly going to do the same for him.

Whitaker plays Uganda Dictator Idi Amin with ferocity and conviction. He shows charisma and madness residing side-by-side. As one of the characters puts it to him at the end of the movie, "You're a fucking child. That's what makes you so scary." And it's true. Amin is like a child in this movie; always demanding his own way and acting out when he doesn't get it. But underneath that childlike simplicity lies the deeper cunning that put him into power and helps him to stay there for several years. He is inhuman in his cruelties, but all too human in his appetites. A ruthless dictator could easily have been one-dimensional, but the humanity that Whitaker imbues Amin with is what makes him truly frightening and is what will earn him an Oscar nomination.

Unfortunately, good acting doesn't make an entertaining movie on its own.

The real star of the movie is McAvoy, who plays a newly made doctor, Nicholas Garrigan, from Scotland who travels to Uganda on a whim rather than go into business with his father. Garrigan, volunteers at a local clinic where another doctor and Sarah (Anderson), the doctor's wife, have set up shop to introduce modern medicine to the locals. Although Garrigan throws himself into the work, he seems more interested in trying to get Sarah into bed than practicing medicine. When one day a road accident throws Garrigan into contact with the newly installed President Amin, the two strike up an unlikely friendship and Amin offers Garrigan a job as his medical advisor. A job which Garrigan accepts.

Garrigan is as much of a child as Amin. He takes on the job which is way above him, enjoying the power and the celebrity that goes along with it. Blind to the atrocities that Amin is committing against his own people, Garrigan instead ends up taking one of Amin's wives to bed. Knowing what the consequences would be to her and to him if caught, this is the most irresponsible and reprehensible act that he commits in the movie.

A movie that features two such unsympathetic lead characters is in a bad place. I really didn't care what happened to either of them and assumed from the beginning that they were both going to get what they deserved in the end. Only the minor characters show any compassion. Anderson in her small role, is under explored but shows more integrity in her few scenes than Garrigan displays in the entire movie. He turns a blind eye through most of it and is then stunned to discover that there are consequences. At least Amin was honest to himself about what he was.

Do I recommend watching this movie? I would never sit through it again, but for those of you who want to see every movie nominated for an Academy Award, you'd might as well go ahead and see this one now, because it's almost a certainty that Whitaker's name will be on a ballot come Oscar Night. 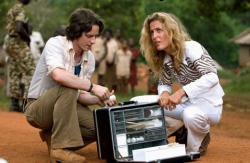 James McAvoy and Gillian Anderson in The Last King of Scotland.

While I agree with Scott that neither of the main characters is sympathetic, they are both fascinating to watch. I was completely entertained by this movie. Here is this nobody doctor from Scotland who suddenly finds himself, not only personal physician to, but also the most trusted advisor to a military dictator. I wonder how much of the doctor's story is true, because it is rather amazing if it actually happened. The guy may not have had the best judgment but he sure had balls.

The performance by Whitaker is truly Oscar worthy. He plays a sadistic and egomaniacal ruler but manages to imbue him with some likable qualities. Especially the scene where he first befriends the doctor. Ironically the friendship between them seems more genuine from Amin's side than from the doctors'. Whereas Amin instantly takes a liking to the brash young doctor from Scotland, Nicholas seems to be in it only for the adventure.

I wholeheartedly recommend this movie. It features incredible acting in a truly compelling story.

Two sides of the same coin.

The Last King of Scotland shows that evil comes in many guises. Two seemingly very different men find that they are more similar than they imagined. Garrigan is a doctor helping in a third world nation. Amin is a dictator who has anyone tortured and killed he does not like. On the surface they seem like two opposing sides.

However, Garrigan and Amin are two very self serving men. They both care not for those around them and react on whims instead of logic. Scott mentioned the quote where Garrigan said of Amin, “You’re a child.” Garrigan is no better. He is Amins pet. “You know what they're calling you? Amin's white monkey.” Garrigan likes the toys his father/master provides him, but like a spoiled child, with no sense of right or wrong, Garrigan takes more than he should, and so his father must punish him. “I am the father of this nation, Nicholas. And you have most... grossly... offended your father.”

Like Scott, I had no affection for either of the main characters. Neither one thought of anyone but themselves. Amin killed thousands but Garrigan has blood on his hands as well. He told Amin about the man he thought was betraying him, knowing how Amin would react. He likewise had the affair knowing what Amin was capable of. In an early scene, Amin gives a speech in which one of his lines is, “I know who you are and what you are. I am you!” He might just as well have been talking directly to Garrigan. They are two sides of the same vile coin.