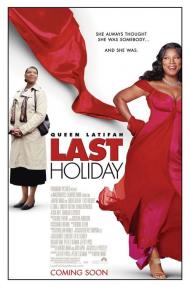 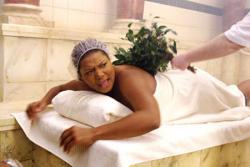 If you found out you only had three weeks to live what would you do? Last Holiday asks this intriguing question but it hardly has an intriguing answer. Along with a few huge plot holes Last Holiday suffers greatly due to cliches and stereotypes.

Georgia is a meek sales clerk in a large department store. She has a crush on a co-worker and in her off time she likes to fancy herself a gourmet cook. One day she is diagnosed to have a fatal brain condition. She needs a surgery to save her life that would cost $350,000. She cashes in her savings and bonds and decides to go on one last big vacation to a European hotel/resort where her favorite chef works. Why she didn't put that money toward her surgery is never explained. The movie never says how much money she has but she flies first class, charters a helicopter, goes on an expensive shopping spree and stays two weeks in the $4,000 a night Presidential Suite. At one point she gambles and wins $100,000. Again she never thinks to put the money toward her surgery.

Queen Latifah proves she can do a romantic comedy here. Georgia charms everyone around by her opinions. With the knowledge that she is going to die she has no reason to hold back. Her honesty endears her to people.

Last Holiday is supposed to be a life affirming film. Whereas Georgia does come out of her shell, the credit can be given to her looking and acting like she has a million dollars as it can be for her dying. The real message of the movie is not to laugh more, love more and not to be afraid, as Georgia says to herself. The real message is, it sure can be fun when you have money to spend!