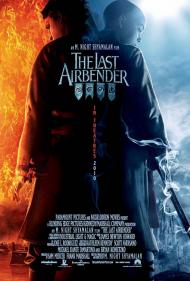 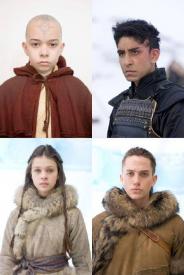 The costumes were good.

The Last Airbender follows the first season of the popular Nickelodeon television show.  Thanks to my sons insistence I watched it before seeing this movie.   I may not have been able to follow what was going on otherwise as this film moves along very quickly.

Two Eskimos find a bald boy, Ang, frozen in some ice with his flying buffalo.  He is the reluctant savior of a world, in which the four elements, earth, wind, fire and water rule.  He is the last of the airbending folk.    The Fire Nation has decided to conquer the world and wants to capture Ang before he learns all the other bending abilities and becomes too powerful.  Along with the Eskimos, Katara, a water bender and her brother Sokka, Ang decides to go to the Northern Water bending nation to learn that skill.  Along the way they rile up people against the warring fire nation.

Action scenes come quickly and go even quicker.  I am not sure if Shyamalan had too strict a budget,  but he seems to be stingy with the special effects.  The cartoon was all about using the elemental powers, or flying on the buffalo, Appa.  This movie barely shows them ride him and the fighting seems to be more about martial arts than fire blasts.

The biggest difference is the mood.  In the show Ang is a 12 year old who likes to play and have fun.  Many episodes began with him stopping somewhere just for the fun of it.  Ang never even smiles in this movie.  One of his favorite things to do on the show was ride on his air scooter.  It never makes an appearance here.

Not only is Ang dull, but Sokka becomes a blank slate.  In the show he is an insecure teen trying to be a man.  He is always trying to prove himself as a warrior, even though he usually fails.  He is the butt of many jokes.  Uncle Iroh was also a comic relief for the ever serious Prince Zuko, but not in the movie.

Without the special effects and the personalities, The Last Airbender is only good for recognition sake for those who know the show.  Oh look, theirs the Air bending scroll.  The blue spirit looks just like it did on the show.  It is also good for noticing the changes Shyamalan made.  Why does Prince Zuko not have his head shaved?  In the show the fire nation could summon fire.  Here they can only manipulate fire that is already available.  It was the worst offense for my son who loves the show.

My biggest complaint is the lack of acting skills.  Noah Ringer may know martial arts but he is no actor.  He says his lines like he just read them for the first time.  Seychelle Gabriel is likewise a blank slate.   There are many talented children actors out there.  Why did Shyamalan pick such lousy actors.  He did such great things with Joel Haley Osment in The Sixth Sense, that I expected better.

I’ve never seen an episode of the television series and watching this movie didn’t make me want to. I honestly hope with The Last Airbender that M. Night Shyamalan has finally hit rock bottom. His once promising career has been in free fall for years now. Having recently seen Abduction by that other promising young director from the 90’s, John Singleton, I must say it’s a toss up over whose career has sunk farther.

The Last Airbender is bad in nearly every way a movie can be bad. The script is filled with generic platitudes like, “There are reasons each of us are born. We have to find those reasons.” And, “We have to show them that we believe in our beliefs as much as they believe in theirs.” Eric, it isn’t just the kids that are bad actors, although I agree they’re terrible. Dev Patel proves it’s possible to shamelessly overact while remaining dull as dishwater.

The special effects are cheesy. The flying buffalo looks like a giant bug. The complex hand-moves the actors make to conjure their powers just looks silly.

Airbender was nominated for 9 Razzies at this years show, walking away with the top (or is that bottom?) prize, Worst Picture, over such worthy competition as the Twilight movie Eclipse. It stunk so bad, in fact, that Nickelodeon (the studio that produced it) didn’t give it a single nomination at the 2011 Kids Choice Awards.

I’m searching for one nice thing to say about this movie. OK, I did enjoy the presence of Katharine Houghton. Old timers may remember her as Sidney Poitier’s fiancée in Guess Who’s Coming to Dinner. She played the daughter of Spencer Tracy and Katharine Hepburn (her real life aunt). It’s always nice when an older actor pops up unexpectedly in a new movie; even when the movie is as bad as The Last Airbender.