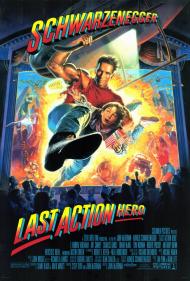 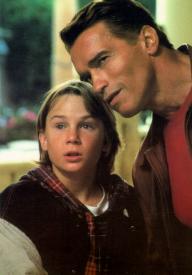 The plot gimmick of having a character in a movie go into a movie can be traced all the way back to Buster Keaton in Sherlock Jr. (1924).  Last Action Hero plays this plot element up with a sense of self aware jokes and references, but it does not always make sense and it ends up breaking its own rules.

Danny is a loner who loves going to the movies to see his favorite movie star, Arnold Schwarzenegger as Jack Slater.  The kindly elderly camera man at a beautiful old movie palace invites him to attend a private screening  of the latest Jack Slater movie.  He also gives him a movie ticket once owned by Harry Houdini.  While watching Jack Slater 4, the ticket magically transforms him into the movie during an action chase scene.

Danny and Jack Slater end up as a team trying to stop a drug dealer, an assassin and who cares what else.   The fun is in the jokes of Danny trying to convince Jack that it is all just a movie.   He takes him to a video store to look for Arnold Schwarzenegger movies.  He finishes Jack's lines before he does.  At one point, Jack says, "I'll be back."  to which Danny says, "That's what you always say!"

Where the movies gets confusing and mixed up is when they go to the police station and Sharon Stone as Catherine Tramell from Basic Instinct walks by.  Then Robert Patrick as the T-100 from Terminator 2 walks past.  If that were not enough, a cartoon cat cop saves the day. Danny has not gone into a movie so much as another dimension in which movie characters roam freely.

As the parts within a film are not real, they hold zero tension.  However, Danny ends up taking Jack out of the movie and into his "real" life.  Jack becomes depressed when he ends up seeing a movie poster of Arnold Schwarzenegger as Jack Slater.  Everyone Jack meets assumes he is the real Arnold Schwarzenegger, who ends up making an appearance at a movie premiere with his wife Maria and becomes a target of the assassin.

One of my favorite moments is when we see Arnold as Hamlet.  "Hey Claudius! You killed my father! Big mistake!"  Last Action Hero has some decent lines.  Early on Jack Slater says to Danny, "Well I'm sorry to disappoint you but you're gonna live to enjoy all the glorious fruits life has got to offer - acne, shaving, premature ejaculation... and your first divorce."  The most surprising line of all is when Arnold says,  "Rubber baby buggie bumpers."

Last Action Hero had a huge budget and much going for it.  The film was however, a box office failure.  It was rushed into theaters with a sloppy editing job.  It was needlessly over two hours long.   Nothing is consistent.  When he enters the real world, Jack learns that he can be hurt, as he is just a normal man.  Then he ends up doing unrealistic action sequences.  Plenty of money and thought went into this film but no one was able to clearly guide it all into a cohesive story.