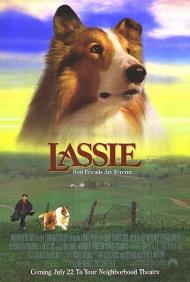 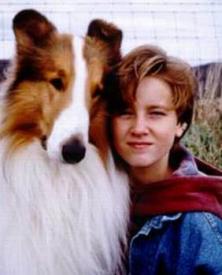 Lassie and Tom Guiry in Lassie.

Lassie was the dog of choice for a generation that grew up watching the popular television show in the 1950's. This 1994 version is a pleasant enough of a remake, even if the dog is the smartest one around and every human around her has a lone personality trait.

Frustrated Steve Turner has recently remarried and is taking his family to Virginia to live in the old farm house that his first wife grew up in. On the drive there they pick up a stray collie. Steve's daughter immediately names it Lassie as she watches the Lassie television show. Her brother Matt, with a poor attitude, just says, "This dog stinks." He eventually learns to like Lassie and decides to turn his family's property into a sheep farm with Lassie doing the herding.

The conflict in the movie is that the rich, selfish neighbors, the Garlands, are using the Turner's property for their sheep to graze. When Matt first meets the Garland boys and tells them where he lives, one of the boys says, "What a hole!" By the end of the movie Lassie, of course, saves the day and the evil neighbors have a complete change of heart.

The ending is the weakest part of the movie. The neighbor's change of heart is ridiculous. Lassie is at first thought to have died but then shows up at Matt's school. The movie ends then but it should have ended with Matt and Lassie arriving home so we see the whole family finding out that Lassie is indeed alive. Sure it's a corny ending either way but, not being an animal person, I enjoyed the family dynamics more than Matt's relationship to a dog.