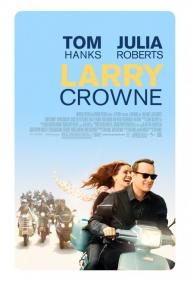 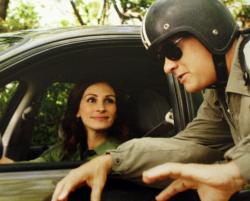 Tom Hanks has a reputation for being a nice guy and he certainly brings that persona to his portrayal of Larry Crowne. Larry is so nice that it's almost difficult to relate to him. Apart from one moment of emotion when he learns that he's losing his job, he accepts all the changes in his life quite easily and with a constant smile. If there's a good way to lose your job, your house and have your life turned upside down, Larry somehow finds it.

When the movie opens, Larry is fired from his big box store job because he doesn't have a college education (which I'm not sure is even legal). When he's unable to find a new job, he decides to take some college courses to help him. His Art of Casual Conversation class is taught by Mercedes Tainot (Roberts), a more cynical (in this movie's terms) person who's going through a breakup with her husband. As Larry settles into college life, making new, much younger friends, he begins to develop a crush on his teacher.

The humor is very gentle. At times almost too gentle. We like Larry and we want to see him succeed, but as I said, he's so nice and so friendly and so many good things happen to him, that he lacks all edge whatsoever. His best asset is simply that he's played by Tom Hanks, and we all know Tom Hanks and c'mon, who doesn't like Tom Hanks?

Beneath the sweet surface there is a mild message about human contact. Several times, blogging, twitter and Facebook are mentioned with negative connotation. The large corporate store and the bank are shown as uncaring, unfeeling entities. Larry's neighbor (Cedric the Entertainer in a small but funny part) runs a continuous yard sale. Larry's friend Talia opens a Thrift Shop. These small, family run businesses get Hanks' blessing. Larry takes a class called, "The Art of Casual Conversation". It's not a hard hitting message, but there certainly is one, about communicating with each other in a face-to-face manner and with a human touch.

It would be easy to make a depressing movie about today's economy and the results of losing your job, but I'm pretty sure I wouldn't want to watch it. Hollywood is often at its best when it provides an escape from the harsh realities of life, rather than when it's depicting them. It's not as though this movie glosses over Larry's problems. He loses his job. He loses his house. He takes a job as a cook in a diner to make ends meet. It's just that Larry sails through all these changes with a smile. Look at change as a new opportunity rather than something to dread, seems to be another of this movie's themes.

Mainly this movie gets by on the talents and charm of Hanks and Roberts. They're both such big stars that no matter how much they bury themselves in a part, you're never not aware that you're watching Tom Hanks and Julia Roberts. They're almost like old time movie stars in that respect. In some films that might be a liability, but in this case it actually helps. 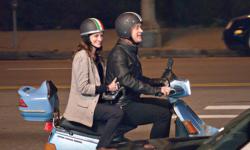 There are also the themes of second chances and new romances. Larry is recently divorced (although we never see his ex-wife) and Mercedes is going through a breakup. The romance angle of the movie, although it is clear where the story is headed, never really takes off. The ending, while charming, lacks a big emotional crescendo.

Some of the funniest scenes take place in the classroom as the various students give impromptu speeches on random topics. One of the students, in a Trekkie costume, talks about Star Trek and specifically his love of the underappreciated Deep Space Nine. This becomes a bit surreal in the next scene where George Takai (aka Sulu) teaches a class on economics.

As Scott wrote, Hanks sails through the movie with a bemused little smile, accepting with grace all the changes happening in his life. He has perfected the average guy persona. Larry is smart, funny and kind without being annoyingly perfect.

Roberts, in the more dramatic role, really sinks her teeth in. Twenty plus years after Pretty Woman her million megawatt smile remains undimmed. Hanks the director seems to relish focusing on his female star. She makes a movie star entrance where we see her shoes under her car door and then her feet stepping into them before we see that famous face. There are also several lingering shots of her walking down hallways. She is particularly effective in the scene where she fights with her husband in the car.

Well into mid-life these two superstars maintain their screen charisma and I agree with Scott’s comparison to old time movie stars.

The supporting cast is good. In addition to Cedric the Entertainer, Taraji P. Henson is funny as his wife, speaking in a sweetly homey voice. Pam Grier, Rita Wilson and Wilmer Valderrama all add to the humor, although Gugu Mbatha-Raw is rather bland as Talia, Larry’s much younger college BFF.

The movie’s take on the recession is not very subtle. One of the suits that fired Larry at the beginning is shown later on (in a scene that lacks verity) delivering for a fast food restaurant. Larry’s finals speech is quite pithy and it represents the emotional peak of the movie. It is at this point that Larry completes his mid-life transformation and is ready to move ahead romantically in this slice of life comedy. 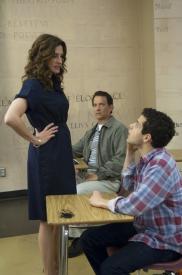 It never bothered me that Larry was nice and friendly and lacks all edge whatsoever.  I have met many people like him.  I however, never bought the college students who, for reasons never explained, take a very personal interest in him, redecorating his home, cutting his hair, getting him a new wardrobe, helping him move.   They cheer his final speech, calling it the greatest ever.  If he was some rich guy I would get it.  If he was famous I would understand.  This group of young, good looking college students wanting so much to be with him and fawning over him has no validity.  The story never demonstrates what this 55 year old guy brings to them, that they would want to spend so much time with him.  Tom Hanks co-wrote the script and no doubt he gets a different reaction from people, than your average 55 year old does.  Perhaps his experience as a wealthy, famous 55 year old movie star skewed his writing.

The message is definitely about how we communicate better with each other in person.   Whenever Larry texts in class he gets into trouble.  The class he takes is all about expressing yourself in person.  What I found interesting is that education has traditionally stressed reading and writing classes.  Today, everyone is a writer, whether blogging or posting on Facebook.  This movie suggests that we now have to be taught face to face communication.

I did not see it so much as about second chances as it is simply about options.  Larry never blames anyone for the decisions he made in life.  He never even talks disparagingly about his ex-wife.  He goes to college to better his opportunities.  Talia drops out of school to start a business.  Mercedes Tainot is miserable in her marriage and job until she exercises her options and kicks her husband out.

The smile on Larry's face after he makes his final speech is one of complete satisfaction.  Sure he has been divorced and fired from a job he loved, but at that point he realizes that he will be alright.  He has just passed his first semester of college with great grades, made some friends and found a love interest.

Not only do Roberts and Hanks seem like old time movie stars, but the film feels old fashioned as well.   In the 1940s Hollywood made films meant to inspire and comfort the folks on the home front, showing American soldiers as heroes and their family at home making necessary sacrifices in support of the war effort.  Larry Crowne sends a loud and clear message, that yes the economy is in the toilet but we still have options and with options come hope.