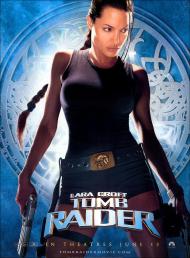 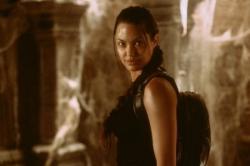 I have played literally thousands of video/computer games in my lifetime. I think I am there for in a good position to judge Tomb Raider the video game series. Thousands of players might disagree with me, but honestly, despite what you might have heard, Tomb Raider the games really aren't that good. As pure games that is. What they are, has been done hundreds of times before, and in better games with better graphics. What the series of games do have is a hook, one hell of a hook. That hook is the character of Lara Croft. Sexy, smart, with a sophisticated British accent, she wiggles and jiggles in ultra-cool style throughout her numerous adventures. The representation of millions of adolescent video game playing young men's fantasies. Tomb Raider the movie is smart enough to know that it is her character that made the games so popular and is wisely filled with the same thing. Once again, Lara Croft the character saves the medium in which she is delivered.

The plot, and it is so unimportant, is a group called the Illuminati who are seeking a mystic triangle that can control time. The triangle is in two pieces, in two separate ancient cities, and it is a race to see who will find the pieces first, Lara or the Illuminati. Now put the plot out of your head because it is only an excuse to show Lara in action.

The whole point of this movie is to showcase Angelina Jolie as the stylish adventuress Lara Croft, as she out cools, outfights, and outsmarts the bad guys. And luckily for this movie, the talented and beautiful Jolie, kicks ass in this role. Her accent may not be perfect. Her bra may be padded. But the bad girl of Hollywood has enough attitude and sultry moves to fill this movie to the brim. She has a presence of toughness and vulnerability and also a knowing smirk that shows she knows how ridiculous this cartoon of movie could be. She is having such a good time in this role that you can't help but enjoy her in it.

Of the other actors in this movie, I have little to say, except for Hillary the Butler. Anyone who is a fan of the British Sci-Fi comedy Red Dwarf will recognize the actor playing him as Chris Barrie. It is thanks to him and Lara's geeky tech sidekick that the scenes at Croft Manor are the best in the film. When it is those two and the curvaceous Lara interacting, the movie shows its best humor and depth.

Ironically, considering the name of the movie, the weakest scenes are those that take place in tombs. The action is taken so much to the extreme as to be almost cartoonish. The stone monsters featured so heavily in the previews and Pepsi commercials, are so easily destroyed by a punch, a kick, or a single bullet, that they offer no real threat at all. As I said, the best scenes are those in Croft Manor where we learn more about Lara's character, her past and her habits.

Since I said the plot is so unimportant it is really unfair of me to mention a plot hole, but since this one is large enough to drive a tank through, I feel compelled to bring it up. When Lara is spying on the evil group about to discover the first piece of the Triangle, she notices that they are looking in the wrong place. Rather than just let them miss the opportunity to find the piece, it can only be found once every five thousand years at a precise time, she offers to show them how to find it so that she can get her hands on it. If she waited 45 seconds, it wouldn't matter if she got her hands on it. They wouldn't be able to get it and neither would she. Of course if she didn't, the movie would end after 45 minutes, but surely there was a better way to write the scene than this.

So while the plot is lacking, the action not the greatest, thanks to Angelina's portrayal of a kick ass character, this movie is still worth watching. Which I think the rest of the audience I saw the movie with, would agree. At the beginning of the film, Lara is shown taking a shower. Halfway through the movie, the camera shows another shower, but as the camera pans down, you realize it is a man and not Lara at all. An audible groan of disappointment emanated from at least the male half of the crowd when they saw it wasn't her. Which pretty much sums up the appeal of this movie and the game it is based on. 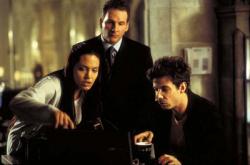 Having wasted damn few minutes of my life playing computer games I had no preconceived ideas about Lara Croft prior to seeing this movie. The one thing I did read about this movie before seeing it was that she got to work with her real life father, Jon Voight. The one scene they are together is so badly edited that it is apparent they weren't actually even on the set at the same time. Oh, and if they actually were and I am wrong in my assumption, then the editing is even worse than I thought.

Angelina Jolie has a great sexy presence. Her full lips and fake breast are nice to look at. For about 10 seconds. If I am going to pay money to look at her for an hour and a half I expect it to be in a more entertaining movie than this. Scott wrote the action scenes were all cartoonish. Cartoonish hell, I have seen more excitement and tension in the new Justice League cartoon than I did in this overly choreographed B movie. 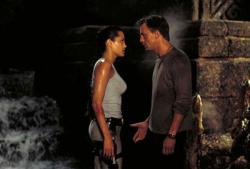 If you create a hybrid of Wonder Woman and Xena: Warrior Princess, then place her in a world that is part James Bond and part Indiana Jones - although extreme versions of both - you get Lara Croft: Tomb Raider. The action is more cartoonish and the plot sillier than anything seen in a Bond movie (not counting Roger Moore's 007) or a Jones' adventure, still it is not that far off the mark.

What makes Lara Croft different is that she is (obviously) a woman. Therefore guys cannot experience the vicarious thrill of sharing her adventures with her. Whereas boys want to be Bond or Indiana, they can only lust after Lara. And perhaps be a bit intimidated by her as well. It seems to me that this movie allows young girls to experience some of the thrill that, until recently, only boys were allowed to have. In that sense Lara Croft: Tomb Raider succeeds far better than the abysmal Charlie's Angels movies. In those movies, even though the angels kick butt, they are still reduced to being mere male sexual fantasies. They even take their orders from a man. Not so Lara Croft. She is the one in charge. Sure she still uses her breasts and sex appeal to gather information, but she is no man's plaything. Cross her and she will fuck you up. The only thing lacking is a man in distress for her to rescue to give the story a bit more bite.

So despite the plot holes, cartoonish violence and contrived dialogue, in my opinion Lara Croft almost succeeds at what it attempts to be. Honestly is there ever any real tension in a James Bond movie? How about Indiana Jones? No, we know beyond a shadow of a doubt that they will defeat the bad guy in the end. Lara Croft is simply a modern version with super-sized F/X and the twist of having the action hero be a female. Either you can relate to this difference or you can't, the fault is not in the movie. Personally I have never been a huge fan of Bond or Indiana Jones, and I don't see myself becoming one of Lara Croft either.