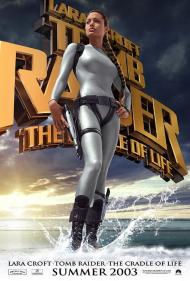 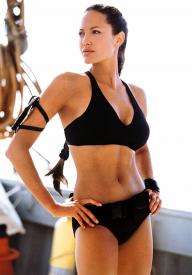 Angelina Jolie in Lara Croft: The Cradle of Life.

The best thing about the Tombraider movies is Angelina Jolie as Lara Croft. Like the games these movies are based upon, she is the hook that makes them entertaining. The plot, the exotic locations, the supporting characters, and the stunts all take a backseat to her. This is fine, to a point, but at two hours, even the talented Miss Jolie is hard pressed to hold your attention.

Even more than the original Tombraider, The Cradle of Life resembles a James Bond movie. In what would be called the pre-credit teaser in a Bond film, we find that an earthquake off the coast of Greece has uncovered an ancient Greek temple. Lara soon shows up, looking very sexy in a black bikini (this time her padded breasts come with nipples), and discovers that the temple contains an orb that acts as a map to the location of The Cradle of Life, which contains Pandora's box. The orb is stolen from her by a group of nameless henchmen and the pre-credit sequence ends.

The movie then cuts, in another James Bond moment, to the villain. The villain is lecturing a group of his minions and even, big shock, kills one of them during the meeting. It was his henchmen who stole the orb and he too is seeking Pandora's box, but he wants to use it for evil of course. The box, it seems, contains a deadly virus that could be harnessed for the villain's nefarious purposes.

The rest of the movie then becomes a race between Lara and the villain to be the first person to get a hold of Pandora's box. It's a race that takes Lara around the world, from Greece to London to Hong Kong to Shanghai to Africa where she finds clues, allies, and enemies. She also finds time to do some amazing stunts and still look damned good while doing them.

While this movie shares many of Bond's strengths. It also shares his weaknesses. There is never a moment when you truly feel that Lara is in even the slightest bit of danger, which seriously weakens the tension. And like most of the Bond films, this one is too long. A good action movie should never be two hours long. Many of the scenes in this movie could have been trimmed or cut completely.

I was disappointed by the lack of scenes in Croft manor in this installment. Those moments were my favorites from the original film and helped to develop the Lara Croft character. Instead we are given exotic locale after exotic locale merely for the sake of being there.

Cradle of Life is exactly what you expect it be; a slickly packaged, sanitized adventure film, with the same hook as its predecessor, that of Angelina Jolie as Lara Croft. If you're a fan of hers you'll be able to find some enjoyment in this movie, but not as much as she seems to be having while making them. 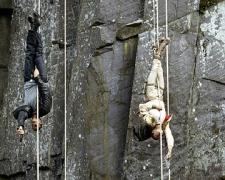 They would have no skin on their hands let alone flesh after this.

I agree that Jolie is the best thing about this movie, but even she is not that good in it. Yeah, she looks great, but is rather boring. She does not act, so much as pose and pout. Her expression rarely changes the entire film. Butler is adequate, but almost any guy could have played the role without affecting any outcome to the film.

The action is fast but unexciting. It is all entirely superficial. Her beautiful face never gets a scratch. Even after it is slammed onto a table of broken glass. If there is never any threat of her being hurt then there is no tension to be found, and as such, the action is meaningless.

My teenage son thought some of the special effects already looked dated. The jets flying and then crashing into the sea looked fake to him. He has played so many computerized video games that I trust his opinion on that subject.

My favorite stunt was when they jump off the building in Hong Kong. It looked like real stuntmen pulled that off. It requires some suspension of disbelief to accept that it actually works within the plot, but then the entire movie is asking that of the audience. It is no wonder this series never continued.