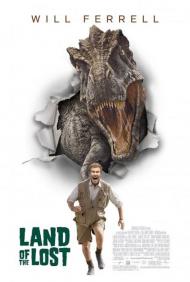 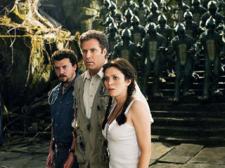 Will, Marshall and Holly meet the Sleeztak.

I was of the age where I watched Land of the Lost on Saturday mornings. It was a fun show with plenty of adventure for children. The Sleeztaks were scary. Grumpy was constantly around to harass Marshall and his kids, Will and Holly. To top everything off was the mysterious pylons with the crystals.

The television show started with the theme song, “Marshall, Will and Holly-on a routine expedition....” The three characters were on a raft that went over a waterfall and ended up dumping them in a prehistoric/science fiction world of the land of the lost. The movie begins with Marshall being embarrassed by Matt Lauer on the Today Show. Marshall is a scientist with ideas people laugh at, except for a girl named Holly, who is most definitely not his daughter.

To investigate some kind of radiation or what not, they end up on a manmade river on a road side attraction, in the middle of the desert, with a tour guide named Will. Marshall turns on a machine he invented, which causes an opening in the time/space continuum causing a waterfall to appear and the three to fall down it into the land of the lost. Once there they get chased by Grumpy, the t-rex. They find their cave. They befriend Chaka. They find a pylon and meet the Sleeztak. Most interesting is that they discover that many people and things have crossed over to this world and continue to do so. I do not remember that from the show.

The humor is definitely juvenile. Potty jokes reign. Farrell pours dino-urine all over himself to disguise his scent. He later gets swallowed by Grumpy, but does not die as he gets pooped out. They introduce a little sex into the movie. Chaka constantly holds onto one of Holly’s breast when they first introduce each other. Marshall and Will see a couple of Sleeztaks having sex. The weirdest moment is when Will dares Marshall and Chaka to french kiss.

As a child, the television show was tense and mysterious. This family lived in a jungle surrounded by constant danger. They knew the pylons were key to leaving, but to get to them, in order to figure them out, they had to leave the safety of their cave and avoid Grumpy and the Sleeztak. There is no tension to be found in the movie. Of course, I may now think the same of the show watching from an adults perspective. The scariest moment, which is actually played for laughs, is when Farrell gets attack by a giant mosquito. Eeeeuuuw! 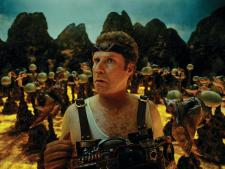 Will Ferrell, hoping he will get it.

Do yourself a favor Eric, never go back and watch an episode of the old show. When I first heard that they were remaking it into a movie, I was disappointed that it was going to be a comedy, because I remembered it so fondly. The Sleestaks and the dinosaurs were scary! I loved it. Then, I happened to catch a couple of episodes on TV and it was the biggest let down of my entire life. The shows weren't just bad, they were BAD. So cheesy and dated that I could hardly believe it. It was about then that I thought, maybe it's not such a bad thing the movie was going to be a comedy after all.

Eric, you say that there is no tension in this movie as if the makers of it were trying, but failed. There's not supposed to be any tension here. It's a very silly movie and that's all it wants to be. Yes, the comedy is juvenile and I'm pretty sure there isn't a single dinosaur bodily fluid that isn't mined for a laugh. Okay, maybe there's one, but this is a family movie. Take the scene where Marshall is chased by the two dinosaurs, for example. You can't seriously expect that in a movie where a scene earlier he drank dinosaur piss, someone is really going to be in danger? If you don't watch it expecting anything but a light and silly comedy, as I did, then you won't be disappointed.

I'll admit that I'm partial to Will Ferrell and that this prejudices my view of this movie. Yeah, he might not be the most on top of his game here, but he still makes me laugh. I think in part that he's hampered by the fact that this is supposed to be a family movie and Ferrell is better when he has no limits. Perhaps they were hoping it would make more money by making it PG-13, but it would have been better if they'd made it rated-R and let Ferrell and company run wild.

Eric, you failed to mentioned one of my favorite parts and that was the recurring references to A Chorus Line. Like the rest of the movie, it's just a silly joke, but I like the way they run with it, culminating with Marshall's "dance" on the volcano and Cha-Ka's unexpectedly good singing voice.

I can't swear that I will remember this movie 30 years from now, but it's definitely better than it's being portrayed. I have a feeling that it will be more popular on DVD than it was in the theaters, particularly if they release an unrated version. If there is one, I'm sure they'll work that last Dinosaur fluid into it somehow. 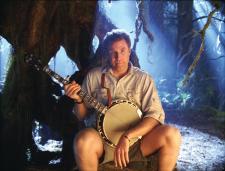 Will Ferrell strikes out on this one.

I had been avoiding seeing this movie because of the incredibly bad word of mouth on it. Eventually I figured it couldn’t possibly be as bad as people were saying. Boy was I wrong. Scott take off those Will Ferrell fan glasses, this movie sucks! I would go so far as to nominate it for worst movie of the past decade.

It may be trying to be silly but it only manages to be stupid. It is a complete mess. I agree that it should have been R rated because at least then it might have been consistent. They already changed Holly from Marshall’s daughter to a colleague. In an R Rated version, instead of Cha-Ka just grabbing her boob they could have had sex. Wouldn’t that have been a hoot?

Like my brothers I remember watching and loving this show as a kid. I did see an episode recently and it is pretty horrible, but only the special effects and the acting. The spirit of it was right on the money. The adventure aspect is what we as kids related to and that is completely missing from this movie. The Sleeztaks, for example, were scary and mysterious in the show. Here they aren’t the least bit funny or scary. They are just dumb.

OK the running Chorus Line gag was a little funny. But by the time Cha-Ka started singing it was definitely worn out. This will be remembered as the biggest misstep in Will Ferrell’s career. This movie should just get lost.