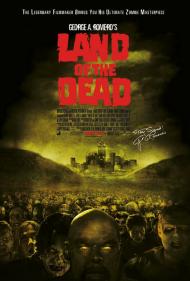 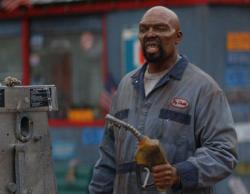 George A. Romero's Land of the Dead.

George Romero's latest zombie nightmare takes up pretty much where the others left off. That means Zombies have taken over the world and the remnants of humanity live within the relatively safe confines of a city that is bordered on two sides by rivers and a man made fenced in barricade on the third side. The human population is divided between the ultra rich and the poor masses. The rich live in a fancy high rise run by a powerful and morally corrupt businessman named Kaufman (Dennis Hopper).

The two main characters are Riley and Cholo played by Simon Baker and John Leguizamo. They are among the lower class volunteers who make daring raids into the surrounding countryside to attain supplies. The movie opens with one such raid. It is an exciting and action packed opening. Romero still knows how to create jump-out-of-your-seat moments.

The twist this time around is that the zombies are beginning to evolve and they are slowly learning how to manipulate their environment. Led by one zombie in particular they eventually cross one of the rivers and attack the once safe city.

The plot has a few minor twists and turns but for the most part is completely predictable. But that has never been the point of these movies anyway. They are all about sheer terror and gore. In this regard Romero doesn't disappoint. There are many quite disgusting scenes of carnage and cannibalism. One that stands out in my mind is when a young woman has her belly button stud bitten out.

The movie ends, however, on a rather ambiguous note. Through Kaufman Romero makes the rather obvious point that humans can be as evil as any zombies. That's all well and good. But he doesn't stop there. He also suggests that the zombies may have the potential for change as well. That's just sick. No one wants a 'good' zombie around.

For violence, gore and fast-paced action Land of the Dead delivers. As social commentary it is far less successful. 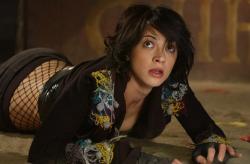 Asia Argento in Land of the Dead.

Silly me, I actually went into this movie expecting it to be a HORROR movie. It's not, despite containing zombies. A horror movie contains scares and thrills. This is a gory, science-fiction, action movie, but it's not a horror movie.

Romero might be trying to make a social statement, but his device in doing so makes no sense. Kaufman runs the city because he's the richest citizen and a big part of the plot hinges on Cholo trying to collect a large sum of money that Kaufman owes him. So you're telling me that after the apocalypse, with only a handful of survivors, people are still going to care about small green pieces of paper? Money would be worthless. The person in control in that situation wouldn't be the one with the most money, but the one with the most guns.

The other thing this movie gets wrong is, as Patrick mentioned, having the zombies evolve. The scary thing about zombies is that they don't think. Their sheer, unrelenting, mindless numbers is what makes them so terrifying. You can't reason with them and while they're not that hard to kill, there's always more of them and they never stop coming. Start giving them personalities and the ability to think and you take all that away.

Instead of horror, the movie is reduced to a pretty generic action film with likable characters. It moves fast enough to keep you from being bored, but never really draws you in completely either.

Perhaps Romero has dealt with zombies for too long. He's put so much thought into their evolution that he's forgotten what makes these types of movies entertaining. With the recent revival of zombie flicks it was inevitable that he would return to make one, it's just sad that his is the worst of the bunch. 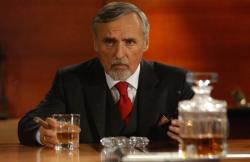 Dennis Hopper in Land of the Dead.

Not only is Romero going for a social message with this zombie movie, but watch the extras on the DVD and you hear him and Hopper comment that they were trying to draw correlations with Hopper's bad guy and George Bush. It is a ridiculous idea. As Scott wrote, money would mean nothing. People just drive up to any store and take what they want anyway. Romero may be able to set up a few scary scenes and some gross ones, but he really does not have a tight script here at all.

All of the many plot holes aside, I found the humanization of the zombies to be the real flaw in the film. Early in the movie, Mike and Riley are talking about the zombies. Mike says, "They're pretending to be alive." To which Riley responds, "Isn't that what we're doing? Pretending to be alive?" In another scene someone comments that killing the zombies is a massacre. At the end of the movie Riley stops someone from blowing a bunch of zombies up and says, "They're just looking for a place to go. Same as us."

Apparently in George Romero's mind there are two classes of people. The ultra controling, evil, rich folk and the poor zombie like masses. So everyone gets insulted by this movie except, of course, the simply misunderstood flesh eating zombies.