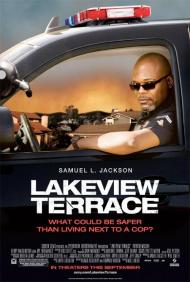 Samuel L. Jackson can play scary and intimidating in his sleep. Lakeview Terrace gives him ample opportunity to display this ability to be menacing. His star burns bright in a movie surrounded by bulbs of far less wattage. Everyone else fairs badly when sharing the screen with him.

The screenplay by David Loughery and Howard Korder deals with race in an interesting manner. At least it starts off that way. Veteran LAPD officer Abel Turner (Jackson) is not happy when an interracial couple moves in next door in the wealthy suburban community he lives in with his two children. He begins doing things to bother the newcomers such as refusing to turn off bright security lights that shine directly into his neighbor’s bedroom window all night long and making racist comments to the Caucasian husband. When he and his two children witness the new neighbors having sex in their pool one night it only serves to justify his dislike of them.

What is refreshing about the script is that it is the black guy who is shown as the racist. And kudos to Jackson for having no fear in playing this despicable character. He is a cop and a single parent with control and anger issues. He is like a modern day Archie Bunker only more extreme in his actions. You know he is a lit fuse that will soon explode.

This is also the movies’ weakness. The first two-thirds is quite good. There are realistic awkward moments that change to real tension and then builds with a natural momentum. Unfortunately the ending is straight out of Hollywood potboilers 101. It is as predictable as movie endings get and the carefully set-up slice-of-life realism goes right out the window. Watching it I kept hoping to be surprised by the climax but I wasn’t.

On the plus side we have a great central performance in a movie that looks at racism from a refreshing new angle. There are also some laughs and some decent character development along the way. The negatives are the blandness of the rest of the cast and the by-the-numbers ending. Sounds like 2 ½ stars to me. 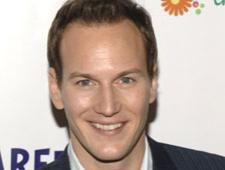 Other than an occasional KKK rally, foolishly kept alive, and motivated, by the press and protestors, racism is often hidden under the guise of progress. Using skin color as a determining factor in college admissions is racism, no matter how you try to justify it. It is as racist to vote for Obama because you want a black President, as it is to vote against him because you do not. Racism has always been a two way street, but only recently, with films like Lakeview Terrace and Guess Who,has Hollywood started to adress it.

Samuel L. Jackson has made more movies in the past ten years than any actor I can think of. Of all his roles he is best when playing someone angry. It is his bread and butter as an actor. Although adequate in the Star Wars movies, he brought nothing to the role of Mace Windu. As Coach Carter he ghettoes the role to suit his strengths as an actor. His role of a disenfranchised middle aged, single father of two, who has a chip the size of a boulder, is a tailored made role that he runs with while, as Patrick said, leaving everyone else in the cast in the dust.

As is the case of all bigots, police officer Abel Turner’s racist feelings can be traced to his own insecurities and feeling of inadequacies. He deals with folks of every color and creed in his neighborhood and on his job. However, when a black woman, Lisa, and her white husband, Chris, move in next door, it strikes a very bitter cord with his personal history.

This is all very fascinating to watch as Turner starts with slight disapproving remarks to the husband, and then escalates his feelings very bluntly. Although Turner is clearly the bad guy here, Chris and Lisa are far from perfect. Their outdoor sexual romp is as inconsiderate to the neighbors as is Turners security lights. Chris lies to Lisa about his smoking while Lisa is dishonest about her birth control.

The problem with the film, besides everything that happens from the home invasion scene on, is that Wilson and Mattson never give their characters any life. They are sweet and likable and then become victims. The character of Chris is nearly interesting. He has issues with Lisa’s father who tends to ignore Chris, even when sitting across a table. Does Lisa’s Dad disapprove of Chris because he is white or would he treat any man who married his daughter that way?

Lakeview Terrace starts as a thought provoking, and somewhat ground breaking film. It is just too bad that a violent ending was the best idea the writers could come up with.

I agree with you guys on the ending. I actually thought it was going to end on a more positive note. They kept showing the approaching fire and I was guessing that the fire was going to reach their homes and Chris or Lisa was going to end up saving Abel's kids' lives or something and they'd learn to at least tolerate each other's presence on the street. Instead, they decided to go the other way and the fire ends up not impacting the story really at all.

Yeah, Samuel L. Jackson plays this character well, but we've seen him play it so many times, that it's kind of boring by now. He doesn't surprise me at any point here. He's louder and more annoying than the other characters but not anymore entertaining.

Patrick, you used the perfect word to describe this movie and that is blandness. The characters and the plot are both pretty bland. I was bored throughout a good portion of it.

And I have to bring up my usual complaint and say that this movie runs too long. I know I say that about a lot of movies, but this one runs out of steam a very long time before the ending. I mean the plot is; the new neighbors move in and the old neighbor doesn't get along with them. That's it. Everything else is just stuff that happens, it doesn't advance the plot.

The only thought this movie provoked in me was wondering when it was ever going to end.