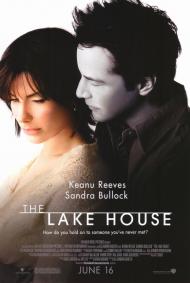 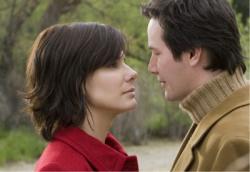 Sandra Bullock and Keanu Reeves in The Lake House.

The biggest hurdle that a time travel type movie must get over is whether or not it sells the time travel angle correctly. Will the audience buy into it or will it render the entire movie ridiculous with the obvious plotholes created from it?

The Lake House asks the audience to suspend their disbelief and accept that a mailbox is transporting letters two years into the future and past instantaneously. It is a very romantic notion and if you can allow yourself to fall into the story, you will find yourself in a interesting love story. However, it's not a very original one. The Lake house is based on the Japanese film, Siworae. There are also some similarities to the 1998 made for television film, The Love Letter, where letters traveled from the civil war era to the present and back.

Bullock plays a lonely doctor who recently moved out of a glass house on a lake. She leaves a letter in the mailbox for the future tenant. She ends up getting a response from a man who lived in the house two years prior. They eventually begin to exchange letters and accept the phenomenon fairly easily. They fall in love and begin to discover that their lives are more connected than they originally thought.

As a love story, it is filled with romantic lines like, "Let me let you go.", "She's more real to me than anything I've ever known." and "This house is about connections." It certainly helps to be in a romantic mood to watch this movie. I personally saw where the movie was going fairly early on. Most people probably will. However, it did not reduce my enjoyment of it.

Bullock and Reeves work well together. They are in several of the same scenes. Often the director has them sit near each other and converse, even though they are supposedly communicating via letters. Their conviction in playing time crossed lovers makes the movie work.