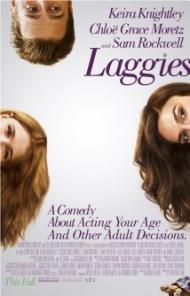 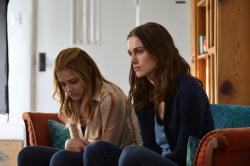 Laggies is a pleasant little coming of age film from Indy director Lynn Shelton and first time screenwriter Andrea Seigel. Its most unique aspect is that it's the coming of age of a 20-something woman instead of a man. Movies with a male lead in their 20s, but who still behave like a teenager are so common that they've become a cliche, but putting a woman in that position does refresh the idea. Apart from that facet of the story however, the film never really stretches itself.

Keira Knightley stars as Megan, a 28 year old woman in Seattle who is drifting through life. While her friends from high school are all getting married and pursuing careers, she's still trying to figure out what to do with herself. She has a college degree, but is content to spend her days twirling a sign outside her father's tax accountant office. When on the same day she discovers her father is having an affair and her long time boyfriend proposes marriage, Megan freaks out and retreats from her life. At the grocery store she meets teenager Annika (Chloe Grace Moretz) who convinces her to buy her and her friends some alcohol. After a night of bonding, since Megan finds that she has more in common with these teenagers than she does her grown-up friends, Megan convinces Annika to let her stay with her for a week. During the course of that week, lessons are learned and Megan helps Annika, while developing an attachment for her single father, played by Sam Rockwell.

The cast is the film's greatest strength. Knightley is charming and attractive enough that you can more easily forgive her foibles and poor decision making skills. Would Annika's father have so readily accepted this stranger into his home if he hadn't been attracted to her? Unlikely. Rockwell is as likeable and talented as always and I was again left wondering why he hasn't made it bigger in movies. It girl of the moment, Moretz, appearing in her 5th movie of the year, is once again good as Annika, the teenager with mother issues. The supporting cast, many of whom are played by local Seattle actors, are equally good.

It is the script that is the film's weakest aspect. It's amusing while only rarely being funny. Dramatic, but never genuinely moving. The darker pyschology of why this grown woman can relate to teenagers better than her own peer group or why she is sexually attracted to a father figure is never truly explored. It also fails to fully develop the supporting characters. Apart from Megan and Annika, nearly everyone else is two-dimensional. All of Megan's friends haven't just grown up, they've also become unpleasant. With them as role models, it's no wonder she has no desire to become more mature.

Director Shelton, whose biggest movie before this one was 2011's Indy hit, Your Sister's Sister, keeps things light and energetic. The pace moves along quickly. She also makes good use of her hometown of Seattle.

Hardly a classic, Laggies (a horrible title, meant to convey that Megan is lagging behind), is enjoyable enough in a very lightweight sort of way. There are worse ways to spend 90 minutes, but it's not the sort of film that will stay with you much past the end credits.