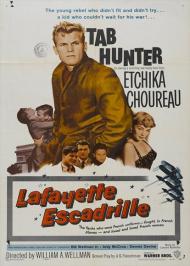 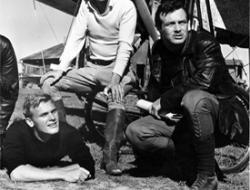 Lafayette Escadrille was the final movie directed by the legendary William A. Wellman. The former WWI combat pilot turned movie director intended it as a tribute to all his fellow flyboys that didn't survive the war. Unfortunately Warner Brothers didn't give him much of a budget to work with and to add insult to injury Jack Warner butchered the finished product by re-shooting the ending against the director's wishes. On top of that Wellman had to settle for casting the pretty but bland Tab Hunter, instead of his preferred choice of the pretty and talented Paul Newman, in the lead role.

The result is an inferior war picture that wavers erratically between hokey melodrama and corny slapstick. And it features only a few brief aerial dog fights and none of them are as exciting or well staged as the ones he shot for Wings 30 years earlier. Clearly this was a director long past his prime working within the restrictive confines of a tight budget.

The story is narrated by Wellman himself, from the point of view of a character based on Wellman (they even use his real name) and played by his real life son William Wellman Jr. It focuses on Thad Walker (Hunter), a rich boy from Boston that runs away and joins the French Foreign Legion's Lafayette Flying Corps shortly before the United States entered the conflict. The movie shows their training sessions in a nostalgic and light-hearted manner. Clearly Wellman had fond memories of this time even though - through voice over - we are told that nearly every man living in the barracks with Wellman perished in the war.

David Janssen plays Duke Sinclair, Thad's best friend. Janssen sports a Clark Gable style mustache and even seems to be imitating Gable's speaking voice. The supporting cast includes Clint Eastwood and Tom Laughlin as fellow pilots and bunk mates. They share virtually all their scenes together. It makes for rather an odd sight during a friendly baseball game to see a young Billy Jack pitching to a baby-faced Dirty Harry.  Look for James Garner in an uncredited bit part.

The story quickly turns melodramatic when Thad gets locked up in the stockade for striking a French officer. His fellow pilots-in-training break him out and he deserts to Paris.  Wellman had a few moments of inspiration left in him. The scene where Thad first sees the beautiful Renee near a crowded bar is memorable for the way the director holds the camera on her face for an extended moment.  But the most striking image in the movie occurs when Thad escapes.  There is a stunning shot of Thad struggling with a French sentry in silhouette against the horizon with the night sky reflected in a muddy pond in the foreground. It is the one moment of artistic direction that stands out in the movie.

Thad winds up in love with a Parisian streetwalker and this leads to his working as a pimp for his girlfriend's Madam.  Wellman, who also took a writing credit, spends too much screentime focusing on Thad's romance at the expense of any wartime action.

In a scene based on a true incident, Thad escorts a U.S. General to a brothel and spills his guts out on the way there. The General is sympathetic and intercedes on Thad's behalf. Thus enabling Thad to finish his pilot training in time to serve in the war. In real life Wellman alleged that he met General John J. "Black Jack" Pershing in a Paris brothel and was discreet about how they met years later upon a chance encounter in Hollywood. This incident impressed the studio bosses enough to advance Wellman's career as a director.

Tab Hunter was gorgeous to look at but lacked dramatic intensity and the more subtle nuances of character development. In short, he wasn't a very good actor. To be fair though he isn't the worst of this movie's problems. The script is weak and the tone uneven. In fact Wellman was so disappointed with the finished film and disgusted with the studio interference that he retired from movie making all together.

The black & white Lafayette Escadrille runs only about 90 minutes and moves along at a fairly brisk pace. Fans of Tab Hunter will find it worthwhile, as will anyone interested in watching a movie directed by a man at the end of his illustrious career and featuring another legendary movie maker in a small role, at the dawn of his. Just don't expect a very good movie.