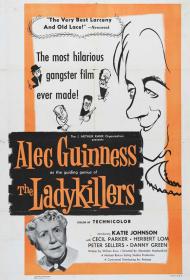 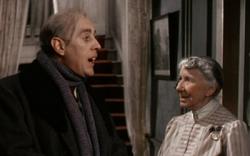 Alec Guinness and Katie Johnson in The Ladykillers.

The Ladykillers is perhaps the most famous of the Ealing Studio comedies and one that has aged very well. Total Film magazine named it the 36th greatest comedy film of all time in 2000 and The Guardian newspaper placed it in 5th place on their greatest comedy list. It was remade in 2004 by the Coen Brothers, with Tom Hanks in the lead, but to mixed reviews and a lukewarm reception. After watching the original it's easy to see why. The 1955 version is so perfect, a remake was completely unnecessary.

Alec Guinness and Peter Sellers are the two most famous members of the cast, but it is 77 year old Katie Johnson who steals the movie. She plays Louisa Wilberforce, a lonely old widow who lives on her own in the Kings Cross area of London with only her parrots for company. Guinness plays Professor Marcus, a very eccentric gentlemen who rents a room in Mrs. Wilberforce's house. He tells her that he is not only looking for a place to stay, but also a place for he and his friends to practice their music. His real scheme however, is to rob an armored car that passes from the near by train station. His fellow "musicians" are in actuality his cohorts in crime. Being a comedy, the crime doesn't go quite to plan and the humor really goes up a notch when Mrs. Wilberforce discovers the true nature of her tenant's business.

Katie Johnson, who would pass away just two years after this movie was released, is a delight as Mrs. Wilberforce. She's well known to the local police as a harmless eccentric. Her good natured politeness, coupled with her innate sense of decency and stiff English upper lip make her a terrific foil to the robbers who constantly bicker amongst themselves. All of them are eager to to turn on the other and get away with all of the money for themselves if they can, and none of them are above killing a little old lady if that's what it takes to get away with their crime.

The humor is rather dark at times as murder and attempted murder play a part of the comedy, particularly as the story progresses. Guinness plays the Professor with bad hair and fake teeth, with a hint of insanity under the surface. The rest of the gang each have their own unique attributes that add to the humor.

As entertaining as the entire film is, the ending really caps it perfectly. This isn't just one of the greatest comedies of all time, it's one of the most satisfying endings of all time as well. I can not give it away of course, but I can confidently say that you will not be disappointed by it. From start to finish, The Ladykillers is a classic. 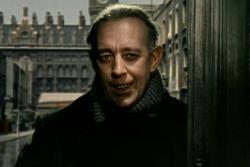 The wonderful Alec Guinness as Professor Marcus in The Ladykillers

I am not quite as enamored with The Lady Killers as Scott. It certainly has some charm and Alec Guinness delivers a brilliantly comic performance. The problem for me is that I never laughed. I found much about this film to be amusing but only in a quaint sort of way.

Based on a play, the setup is simple enough, taking place mostly in Mrs. Wilberforce's house and the surrounding neighborhood. I agree with Scott that she is a delight. She innocently infuriates the criminals. She constantly busts in on them planning the robbery, asking if they want tea.

One of my favorite moments of hers is when she asks the big dumb muscle head, who is pretending to play a cello, “May I ask you where you studied?” and he answers, “Well, I didn't really study any place, Lady... I just sort of... picked it up.” Mrs. Wilberforce then goes on to reminisce about her 21st birthday being interrupted by the news of the Queen passing. After she leaves to check on the tea, muscle head asks his companions, “Who's she talkin' about? Old queen who?”

The movie has plenty of those cute, but not exactly hilarious, scenes. Another one involves Mrs. Wilberforce asking one of the men to help her with her pet parrot. It starts simple enough but ends with someone falling off the roof.

What surprised me most about this film was Alec Guiness. I was first introduced to him through Star Wars (1977) and then The Bridge on the River Kwai (1957). In both films he plays it very straight, while here he is a slimy demented criminal who drips contempt. I have a new appreciation for his acting talent. With the exception of Paul Newman, can you name another actor who appeared in hit films in the 1950s, 60s, 70s and 80s?

The Lady Killers reminded me of Arsenic and Old Lace (1944). As Scott wrote, it gets a bit dark when people start dying. The difference is that I root for Mortimer, while there is no one to root for here. Sure Mrs. Wilberforce is the victim and heroine but she is so daffy and annoying that I never really cared if she lived or died.

Katie Johnson as Mrs. Wilburforce enters her home in The Ladykillers.

It's always interesting watching a classic movie for the first time. Some immediately live up to their revered status while others disappoint. Some classics take a while to grow on you and it's only upon subsequent viewings that they are fully appreciated. The Ladykillers started off a bit slowly for me, but once the old lady discovers the cash spilling out of that cello case it really hits its stride and doesn't let up till the very satisfying ending.

I am in complete agreement about the wonderful performance Katie Johnson gives as the Old Lady. She had first appeared on the London stage way back in 1894, during Queen Victoria's reign, and she would make one final movie after this one, but The Ladykillers is the role for which she will always be remembered. Her looks perfectly suit the role; from her dowdy old lady dress and hat to her rosy cheeks, cheerful disposition and slightly bemused look in her eyes, she is the quintessential little old lady.

Alec Guinness and Peter Sellers are both quite funny as are the rest of the actors playing these criminals posing as musicians. It's a hoot watching them plan to deceive and backstab each other whilst trying to convince each other to knock off the old lady. Some comedies run out of steam while others, such as this one, get better as they go along. The final 30 minutes is sheer comic brilliance.

The direction by Alexander Mackendrick keeps things moving along nimbly and the set of the lopsided house sitting over the railway tunnel is the perfect dwelling for Mrs. Wilburforce (see photo). One nice detail is the fact that as the robbers get bumped off it's reflected in the musical recordings they play as cover. These go from a quintet to a quartet to a trio, etc.

As for your question Eric, it depends on what you consider a hit film, but both Marlon Brando and Dennis Hopper appeared in moneymaking movies in those same decades. And your statement that there is no one to root for and that you never really cared whether Mrs. Wilburforce lived or died surely says more about you than it does this movie. She's a delightful old woman and The Ladykillers is a genuine comedy classic. 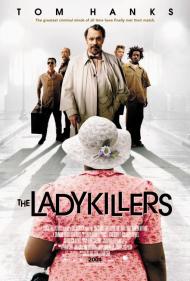