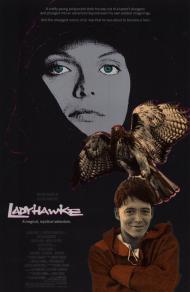 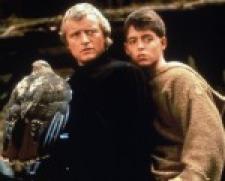 For just over ten years Richard Donner was one of the most successful directors in Hollywood. Starting with The Omen (1976). He went on to do the first two Superman movies, The Goonies and the Lethal Weapon series. During this period he directed one of the greatest films ever made, Ladyhawke.

I know, you are thinking how can a movie about a man who turns into a wolf and a woman who turns into a hawk receive such a compliment? The reason is that no other film comes to mind that combines fantasy, action, romance and humor so well. Each element is not just merely present, but each plot device adds to the movie.

The film opens with Gaston escaping from a medieval castle prison. He is trying to fit through a small, tight tunnel. “This is not unlike escaping mother’s womb. God, what a memory.” Broderick speaks out loud to God and to no one in particular throughout the movie. His commentaries on the goings on are some of the funniest lines in the movie. “I should have known better; every happy moment in my life has come from lying.”

After escaping, he is captured by a big man in a black cloak, Navarre, who has a pet hawk. He wants Gaston to help him get back into the castle in order to kill the Bishop. Navarre tells Gaston, “I have waited almost two years for a sign from God.” To which Gaston replies, “Sir, the truth is I talk to God all the time, and no offense, but He never mentioned you.”

Gaston soon learns that he really has no choice in the matter. He also discovers that at night Navarre turns into a wolf and the hawk turns into a beautiful woman, Isabeau. They were lovers, betrayed by a priest, and cursed by the bishop. The first scene that Isabeau appears in took my breath away when I first saw this movie so many years ago. Pfeiffer’s face is that of a porcelain goddess, framed in Navarres black cloak. The Bishop is in love with her, or at least in lust with her. He sends a trapper to get her, “A beautiful woman with alabaster skin and the eyes of a dove. She travels by night, only by night. Her sun is the moon. And her name is... Isabeau. Find her and you find the wolf. The wolf I want. The wolf who... loves her.”

The Bishop is a slimy bastard of the highest order. Scum drips from his lips as he uses God to get his way, “Go. To break faith with me is to break faith with him!” Wood has a couple of great lines and his voice is perfect for adding a menacing tone, “Great storms announce themselves with a single breeze, and a single random spark can ignite the fires of rebellion.”

One great things to note about this movie is that it was filmed before CGI became a staple in fantasy films. Although some computer reworking could add a bit to the transformation scenes, they really would not make this movie any better. Another great thing about this movie is that Donner filmed it all on location, throughout several different castles in Italy. Nearly 20 years later, Donner directed Timeline, in which the medieval movie set is all too obvious.

If the movie has anything that could have been improved on, it is the music. It is like a bunch of Transiberian Orchestra rock songs. The one musical piece that adds as well as meshes with a scene begins with Broderick saying, “She was sad at first.” It then shows the hawk fly over a pond with its wings dipping into the water. It a beautiful soaring piece of music.

The music is a minor distraction when there is so much action, passion and humor to keep my interest. When the hawk gets hurt, Gaston must get help from the priest that betrayed the lovers. He adds another level of humor, as well as a possible solution to the curse. His final exchange of dialogue with Gaston is priceless, “I fully expect to meet you at the Pearly Gates, little thief, and don't you dare disappoint me.” To which Gaston replies, “I'll meet you there, Father... even if I have to pick the lock.” 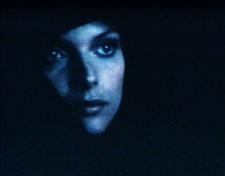 It is like looking at the face of love.

I agree almost 100% with you Eric. The only thing I disagree with you about is the music. I like it. I remember back to when I first saw this movie and not liking the music then, but now, dozens of viewing later, I find that I can't imagine it with any other score. It suits it perfectly.

Fantasy movies are the most neglected genre in Hollywood and the one most likely to be done badly. There have only been a handful of really good ones and this has to be counted among them. What's great about it is that it treats this world of knights and damsels and magical curses in a serious and adult manner. It's a fairly unique movie in this respect.

The casting is superb. Hauer has a distinct look about him, something to do with those piercing blue eyes that makes him perfect as Navarre. Eric, you're not the only one who was smitten with Pfeiffer after seeing her in this role. I had such a thing for her back then. While I love Broderick as Gaston, he tries throughout the movie to put on what sounds like a English accent and it just doesn't work. It's so inconsistent and vague that I wonder why he bothered at all. It's a minor quibble that doesn't detract from my enjoyment, but it does niggle at me when I watch it.

It had been quite a few years since I sat down and watched this movie and yet I could still quote huge stretches of dialog right along with the characters. I must have seen this movie at least 5 times in the theater. I remember cutting class to see it when it opened and then doing it again the following week.

One note about Donner. I wonder if this is one of his own favorite movies. In 1997's Conspiracy Theory, also directed by him, Mel Gibson goes into a movie theater where Ladyhawke is being played and the final battle from the movie is seen on the screen. 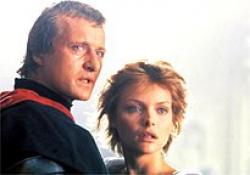 Rutger Hauer and Michelle Pfeiffer as Navarre and Isabeau in Ladyhawke.

Ladyhawke is indeed a fantasy masterpiece. As my brothers have already written it features a talented cast, it was beautifully shot in an impressive locale and effortlessly combines elements of fantasy, humor, action and romance.

It is also an example of animals (actual flesh and blood creatures, not CGI images) being used in a movie to great affect. It is not just the hawk and the wolf that are characters in the story, the black stallion Goliath plays an important role as well and is one helluva beautiful steed.

The medieval setting and the magical elements give it a fairytale quality, albeit (as Scott noted) a fairytale for adults. The central plot device of the curse placed on Navarre and Isabeau is impossibly romantic. They can never be together as lovers. When one is in their human form the other is either a hawk or a wolf. They have only one fleeting moment every sunset and sunrise where they can almost touch. It is poetically tragic.

Pfeiffer and Hauer both bring a desperate intensity to these star crossed lovers. Theirs is such a melancholy feeling of longing best summed up by Isabeau after Gaston asks her, “Are you flesh, or are you spirit?” Her answer is heartbreaking, “I am sorrow.” She tells him.

Matthew Broderick made some great and diverse movies during the 1980s including War Games, Ferris Bueller’s Day Off, Biloxi Blues, Torch Song Trilogy and Glory. He was so charismatic and talented but clearly peaked at a young age, as nothing he has made since holds a candle to these classics. His fluctuating English/American accent is all the more silly when you consider that the movie is set in the South of France.

For the record the score didn’t bother me either, in fact I rather enjoyed it when the music kicked in during the action scenes.  And I didn't even recognize the young, physically fit Alfred Molina as Cezar.

I rarely think that movies could be improved with the use of CGI, however I agree with Eric that the transformation scenes would have been better for it. They are a bit clumsily handled even for the technology available in 1985. I also think the movie could have been trimmed by 10 to 15 minutes; the ending drags on a bit.

But these are very minor complaints about a movie that remains as uniquely entertaining today as it did more than a quarter of a century ago. I cannot think of another example of an epic fantasy movie that contains in equally sublime measure action, humor and romance. Well done!