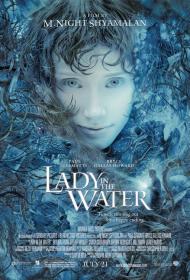 When I saw the bad reviews for Lady in the Water, I didn't immediately assume the worst. Most people seemed to enjoy Night's earlier film Signs, when I had it found it just silly. His most recent film before this one, The Village, had been roundly criticized and I had still managed to enjoy it. So I went into Lady in the Water with an open mind. However, it didn't take long for me to realize that this time I was in almost perfect agreement with the majority on this one. Lady in the Water is boring, takes itself waaaaay too seriously and fails to thrill on any level. The only good thing I can say about it is that like all of Night's films, it is visually impressive.

Reportedly the story is based upon a childhood story that Night invented to tell his daughters about a type of people who lived under their pool. From that story we get this one, which revolves around Clevlend Heep (Giamatti), the handyman at a nondescript apartment building somewhere in Pennsylvania. One night Heep discovers a young woman named Story who claims to be a Narf, or sea nymph, from the Blue World living in the building's swimming pool. She claims that she is there to awaken inspiration in a writer who lives in the building so that he can write a book that will, one day in the future, inspire a world leader who will bring about great change. Arrayed against her are creatures called scrunts, who look like wolves on steroids, while their fur looks like grass so that they can blend into the ground.

It is the script that must take the blame for most the problems, starting with how anyone and everyone who hears Story's story, instantly believes her and believes her with a straight face. In a fairy tale this might not be such of a problem, but this world is presented as a real one and not a fantasy world. And where in earlier Night films the story was fed to you in small drops while you waited for that final twist that would explain everything, this movie spoon-feeds you the entire plot with long stretches of exposition.

There are only a few moments of action where there should have been many more to offset the long talky scenes. To give Night credit, the scrunts (despite their stupid names) are quite frighteningly presented. The one and only person to actually be killed by one though, is a movie critic who has recently moved into the building. Perhaps this is meant to be a sort of personal revenge on Night's part as a way of paying back perceived sleights from critic's comments on his earlier films. He even has another character say, "Who would have the arrogance to judge the intentions of another human being?" in reference to the critic, which is rather a stupid comment. I don't know any critic who judges a movie based upon the intentions of the filmmakers. I'm sure it wasn't Night's intention to make a crappy movie here, but it's what he has done.

Apart from the visuals, the only other saving grace in the movie is Giamatti as Heep. He stutters and stammers as the retiring handyman with a past and actually makes you believe that he believes in what he's doing. Giamatti has proven himself to be the leading character actor of his generation. Thankfully then, his performance here shouldn't damage his career. 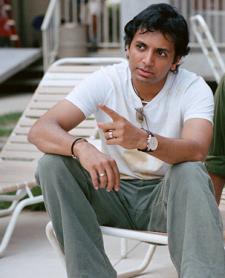 In response to your statement made in this movie, I must correct you. Movie critics do not, "judge the intentions of another human being." They critique the results of a group of people who put their combined efforts into making a film.

My critique of Lady in the Water is that the actors did what they could with what they had to work with. They were working with a script that needed desperately to be trimmed. There were far too many people doing far too little of anything. The guild, the healer, the guardian and the interpreter all seemed to be important because the script says they are but none do anything that miraculous that could not have been done better with less people and less screen time.

The best moment this movie has, and the one that will be remembered the longest, is when the critic gets killed. You may hate critics Mr. Shyamalon, but people hate paying for movies that promise one thing in the previews and deliver something else in the actual film.

Sincerely,
A movie goer (who would like his money back)

I was expecting to hate this movie but as it turns out I rather enjoyed it. It is a charming cinematic fairytale in which Shyamalan proves he has yet to run out of original ideas. Unlike my brothers I easily invested in the characters and was never bored. Also the fact that the entire movie takes place at the apartment complex and seems therefore separate from the 'real world' renders the fantasy elements more believable.

One thing neither of my brothers mentioned was the humor. This is his most humorous movie to date. I disagree with Scott that it takes itself “waaaaay too seriously”. I found the performance by Paul Giamatti to be quite wonderful, he holds the story - and Story - together and provides the heart.

I actually got caught up in Cleveland's quest to help send Story home. It was fun watching him try to figure out which part each of the tenants played in the fairytale. The young boy interpreting messages from cereal boxes was clever and funny.

Lady In the Water got a bad rap in the press and at the box office. It is a lighthearted and uplifting fantasy based on hope and healing. Shyamalan remains one of my favorite movie makers. This one ranks behind Sixth Sense, Signs and The Village but ahead of Unbreakable.