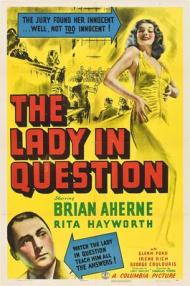 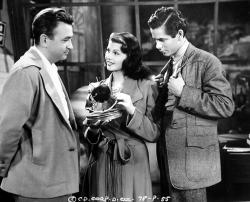 Rita Hayworth and Glenn Ford in The Lady in Question.

The Lady in Question marked the first pairing of Rita Hayworth and Glenn Ford. It firmly established their onscreen relationship. In this movie, as well as in Gilda and Affair in Trinidad, Hayworth plays a woman with a mystery about her that drives Ford to distraction.

As the movie opens, bicycle shop owner, Andre gets called to jury duty and eagerly races off to do his civic duty. His wife and, college aged, son and daughter find his enthusiasm for jury duty amusing. Andre finds himself sitting on a jury in which Hayworth is accused of killing a man, with whom she may or may not have been a mistress to.

In a ridiculous way, Andre helps to get Hayworth acquitted. He then offers the poor, innocent girl a job at his bicycle shop to help her out. He lies to his family that she is the daughter of an old friend. Ford, however, knows who she really is, but it's too late for him to tell mom as he has, of course, fallen in love with her. Sure it is one of those love at first sight things, but hey, it is Rita Hayworth.

Rita would go on to become the hottest sex symbol of the 1940's. It happened after she started appearing in musicals where she was all dolled up in glamorous clothes, dancing around showing some skin. In The Lady in Question, Hayworth wears very conservative, I am too demure to be guilty, clothes. She walks around acting very melancholy. She is a mere shadow of her future mass appeal as a movie star.

Ford made a dozen unmemorable movies before serving as a Marine in World War II. This movie being one of them. His first film after coming back to Hollywood was opposite Hayworth in the classic Gilda. The first thing you notice about Ford, if you can actually tear yourself away from Hayworth, is just how much older he looks in Gilda than in The Lady in Question. Whereas Hayworth got sexier, Ford just got older. In their first movie, Ford is a baby faced rube. In Gilda, he is a mature man with some life experiences. Was it his acting, or did the war play it's part? Either way, The Lady in Question is more of a foot note in the pairing of Hayworth and Ford than it is an actual movie worth seeing.