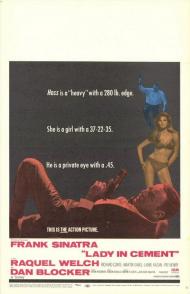 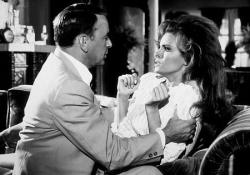 Frank Sinatra and Raquel Welch in Lady in Cement.

Lady in Cement is a detective mystery set in the seedy world of Miami, Florida in the 1960s. Frank Sinatra roams a world full of gangsters, go-go dancers and homosexuals. All the while an annoying soundtrack blares some swinging 60s music that would be better suited to a romantic comedy than a detective story.

While diving off the Florida coast, private dick Tony Rome finds a naked broad wearing cement slippers. Soon afterwards, a big goon hires him to find his lost sweetheart, Sondra, who sounds strikingly familiar to the soggy corpse. This leads him to a go-go club full of mammary endowed dancers and the suspicious gay owner and his bartending boyfriend. From there he goes to meet Kit, who hosted a party that Sondra was last seen at.

The scene where Frank first comes upon Welch is her best. She is wearing a bikini and climbing, all wet and glistening, out of a pool. Or as Sinatra says, "You'd look good in a paper napkin." For the rest of the film she has bigger hair than King Kong and speaks lines. Definitely not Welch's strongest trait, although she does have one of the funniest lines in the movie. A policeman knocks on her front door, and after she opens it, tells her, "I don't want to alarm you, ma'am, but there's a killer on the loose." Welch responds nonchalantly, "Oh, well if I see a killer, I'll call you."

And there lies the problem with Lady in Cement. At one moment it is trying to be a tense detective story and the next it is a whimsical comedy. People get killed and Rome often finds himself in tough situations but then that damn music plays and the movie becomes light weight fluff. Blocker plays a big tough guy who may or may not be bad. In one scene Sinatra finds him hiding out in a massage parlor watching Bonanza, in which Blocker played Hoss.

Lady in Cement is politically incorrect, and could never be made today without changing its attitude. All of the women are just around for cleavage sake and one nude scene if you count the good looking dead corpse. In one scene a woman wearing only a strategically placed scarf begs a man painting her to let her go to the bathroom. After pleading several more times, Sinatra finally tells her to go. Thank God a man was around to "let" that woman do her business. The movie also features several gay characters. Sinatra spares no expense in belittling and condescending to them. He even slurs some words mockingly. Granted, two of the homosexuals are possibly bad guys, so it's okay.

Lady in Cement is only memorable for its cast. It demonstrates that Raquel Welch was a hot babe who could not act to save her life. It also shows that even a truly great and talented star, like Sinatra, cannot save a poorly conceived movie. As a last note, Lainie Kazan is probably best known as the overweight Greek mother in My Big Fat Greek Wedding. In this film she is a HOT go-go dancer. Who knew?

Frank Sinatra in Lady in Cement.

While I agree this isn't a great movie by any stretch of the imagination, it can be enjoyed if you don't take any of it seriously. As Eric said, it tries to maintain a light, smooth, comical tone, while generating real tension at the same time, but never finds the right balance of either. The lighter moments work best and treating it like a comedy also makes the dated aspects more palatable.

The one area where I categorically disagree with Eric is the soundtrack. Far from finding it annoying, I found it one of the most enjoyable aspects of the whole movie. It's groovy jazz and quite catchy in places. It also suits the lighter moments of the story better than the attempts at action or drama.

You can tell those involved with the making of this movie weren't taking it overly seriously by the number of in-jokes they included. Eric mentioned Dan Blocker watching Bonanza, but there are several others. There's an ad for Rat Pack cohort Dean Martin's restaurant on the side of a cab Sinatra enters, a reference to Sinatra's ex Ava Gardner in the line where he mentions that he used to know a woman who collected bull fighters, and you can hear a muzak version of the Sinatra hit "You Make Me Feel So Young" played during a chase scene as he runs from the cops.

Despite being too old for the action scenes, Sinatra still does a good job in the lead. Again, the lighter tone makes his tough guy persona, with his ability to knock a guy out with one punch, much easier to accept. Welch was never a great actress, but she's been better than she is here where she seems to be reciting her lines more than acting them. Blocker makes an amusing heavy with his enormous size.

This was the second time Sinatra portrayed the Tony Rome character and while the first film was a minor hit, this second installment wasn't greeted quite so enthusiastically. Frank's movie career was winding down at this point and following his next film, 1970's Dirty Dingus Magee, it would essentially be over, although he would make a few more appearances on television and the big screen over the next few decades. If this is an example of the kind of roles he was being offered it's no wonder he decided to opt out of Hollywood. He could no doubt have continued to make movies as a character actor in patriarchal roles, but for a man who did it his way that was never going to be enough. 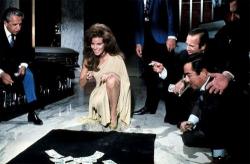 Lady in Cement is a relic of its day. It came out during those transitional years in the late 1960s when American cinema was finally growing up (or growing coarse, depending on your point of view). For the first time nudity, adult language, and graphic violence were allowed on the big screen. Many stars from the earlier era attempted to change with the times and Sinatra was right there among them.

He certainly doesn't embarrass himself as Tony Rome. He conveys a dissolute world-weariness that perfectly suits the character. The fact that this also happened to be Sinatra's real-life persona doesn't detract from his performance. He's close to being a burnt out shell of a man but, as Scott wrote, he manages to pull off the physical side of the role.

As Eric pointed out, this movie is positively prehistoric in its attitude towards women and gays. Apart from Welch, the women are pretty much all strippers and prostitutes who are completely subservient to the male animal. Twice in the movie a woman bends over while the camera zooms in on her crotch.

And gay men don't fare any better. They are all effete whiny criminals. The scene where Rome knocks out two gay men with one punch is hysterical. Especially when you consider that one of them is a very large ex-football player and Sinatra was a skinny little runt. To demonstrate just how much times have changed there's a line where a cop threatens a man by telling him if he doesn't cooperate, the cop is going to have him arrested for impersonating a female.

Dan Blocker's Waldo Gronsky is the movie's most interesting character. You're never quite sure just whose side he's on or whether or not he will turn out to be noble. The ending of the production code allowed for morally ambiguous characters in shades of gray to replace the simplified black and white morality of yesteryear.

I disagree somewhat with both my brothers about Raquel Welch. Her line readings aren't as flat as they make them sound. Sure she's a bit on the mechanical side but she gets two memorably funny moments. One Eric mentioned, when the cop comes to her door, and the other happens in the scene where she shoots craps at a morgue (see photo) run by a swishy gay man.

The gangster that runs the game tells Rome (in another of the movie's in-jokes since Sinatra famously sang about running a floating crap game in the movie Guys and Dolls), “Henceforth at any future floating crap game that I arrange, I wish to inform you as of this date that this broad is to be personally excluded. Understood?” Welch walks over and in a nasally New York accent that matches the gangster's wiseguy speech pattern says, “Uh, I got a sneakin' suspicion you would not break down if I gambled in a different morgue.” She was always a much better comedienne than dramatic actress.

This movie marked the fifth and final collaboration between Gordon Douglas and Frank Sinatra. Douglas had directed Sinatra previously in Young at Heart (1954), Robin and the 7 Hoods (1964), Tony Rome (1967), and The Detective (1968). He had begun directing in 1936 with the Our Gang feature General Spanky and continued directing well into the 1970s.

As for the soundtrack, I'm with Scott. In fact I was going to describe it as groovy jazz but he beat me to it. At any rate it completes the time capsule and sets the perfect tone for the picture. There's entertainment to be had watching Lady in Cement but it's mostly of the camp variety. Besides that it's worth a look just to see these two great stars together at a pivotal time in the history of cinema; Sinatra in the waning days of his movie career, Welch in the early days of hers.