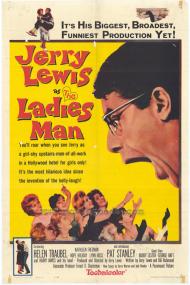 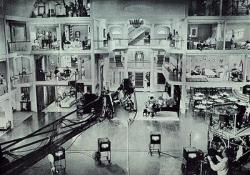 Jerry Lewis wrote, directed, produced and starred in The Ladies Man in 1961. Like most of his movies it is completely silly, only here the laughs lean more to the surreal. There is also less of a plot than usual. Despite this, or perhaps because of it, The Ladies Man ranks as one of my favorites of all his movies.

Lewis plays Herbert H. Heebert (and in one scene Herbert's mother). He gets dumped by his fiancée and then accepts a job as houseboy to the wealthy Miss Helen N. Wellenmellon, played by real life opera singer Helen Traubel. Of course her home turns out to be a boarding house for beautiful young women.

The real star of the movie is the set of the house. It was built like a gigantic doll house. The walls fold out and you can see inside the different rooms on different floors. Each room with a distinctive interior design.

All of this is an excuse for Lewis to stumble around and mug hilariously, whether delivering mail to the girl's rooms, “Thanks for the mail, now baby let's wail!” or feeding Miss Wellenmellon's pet “Baby”. The most surreal moment is when Herbert finally sneaks into a mysterious room that the housekeeper has told him never to enter. He discovers a fabulous femme fatale in a glamorous all white room where Harry James and his orchestra play a tune.

George Raft parodies his gangster image, in a cameo, and winds up dancing with Lewis. This is also the movie in which Lewis famously yells, “Hey, Lady!”

Not every gag works, the scene with the bunk bed for example. Others are clever, like the fly away butterfly collection. In all its flaws and glories this is Jerry Lewis at the peak of his talents, particularly as a director.