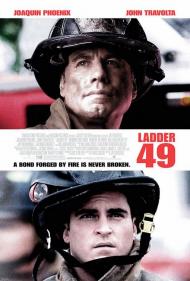 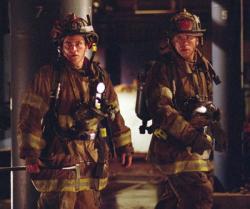 Ladder 49 has one purpose and one purpose only; to inform us that firemen are heroes. Since 9/11, we have all come to completely understand that very fact. So Ladder 49 really has nothing unique to say.

As the movie opens, firemen are battling a huge blaze. Jack (Phoenix) gets hurt after falling several stories in the middle of the burning building. The movie then goes to flashbacks, with occasional scenes of men trying to find and rescue Jack.

We see Jack as the rookie firemen. We see jokes get played on him. We see him meet and marry his wife. We see him with his children. We see him rescue people in fires. We see the drinking and camaraderie between him and his fellow firemen.

What we don't see is any personality of any sort in any character in the entire movie. Not one fireman has any distinct characteristic whatsoever to distinguish them from each other. The only thing we ever learn about any of them is that they all like there job, they all play jokes on each other and they all drink. Even Jack is a blank slate.

Jack spends lots of time away from home. He is either at the firehouse, out fighting a fire or drinking at a bar. At one point, he comes home to find his wife is upset. But she is not upset about his absence or his drinking. She is upset because he might get hurt doing his job. But that issue is glossed over quickly, and what might have been a bit of drama dissipates.

This film so lacks in drama that I got excited when a new rookie confesses that he is gay. Thank God, I thought, finally a character with a personality and some potential for some drama. But no, it was just a joke. Remember, these guys all like to play jokes when they are not drinking or being heroes.

Occasionally the movie flashes forward to the wounded Jack in the burning building. At first, you think he is dead, but then he crawls across the floor, then he breaks through a brick wall. Is this guy hurt or not? I couldn't tell, and I was watching the movie.

Phoenix is a talented actor and this movie has plenty of opportunity for tension and drama. The problem is that the writer never put any thought into the characters, or the plot. The only thing that comes across in this movie is that firemen have dangerous jobs and are heroes. That is all fine and dandy but couldn't that message be stated in an actual story.

In Ladder 49 we see Jack tell his wife that he is a hero. We see Jack get an award for being a hero. We see the fire chief point out his father's medals. We see a fireman get a heroes burial. I have a headache from having this message beat into my head. Yes, firemen do heroic stuff. It is their job. It's just too bad the writer of this movie didn't do his.