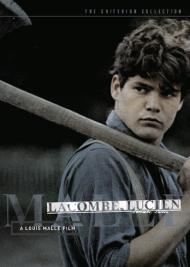 I go through phases with the kind of movies I like to watch and recently it has been foreign films. Lacombe Lucien is a Louis Malle directed World War II film about the French underground and a traitor who joins the German police to fight against the resistance. Although Malle knows how to portray human nature, he does not how to process an action scene.

Lucien is a teenage French boy who gets turned down when he asks to join the French resistance. Instead he joins with the French police who are working with the Nazi's. He is a collaborator and a traitor of the highest order. He reports on other Frenchmen to the German's who arrest and torture their prisoners.

Along the way Lucien meets the daughter, France, of a Jewish tailor. Their relationship is more convenient that romantic. She needs him to help her father and he needs to feel powerful and dominant. The sex works for both of them on different levels.

Malle directs a movie like a painter covering a canvass with beautiful still life. He does not show Lucien and France seduce each other. He does not show them have sex. He simply has a shot afterwards of Lucien standing naked looking out the window while a naked France lies nearby. Neither one speaks or even moves. The movie has a couple of action scenes that do not really exist. Lucien hears gunshots from downstairs. He races down and finds several bullet ridden bodies posed about the room. A car crash is not shown, only the aftermath of the placement of the car and the two victims and the cow that was hit. A scene near the end has France bathing in a pond while Lucien looks on. The scene has no dialogue. It looks more like a painting than moving film. Malle does not direct motion he simply poses his actors.

Malle has an eye for detail and beauty. Every scene is nice to look at and every locale is a paradise worth visiting. However, the dialogue is at a minimum and the actors, especially Blaise, seem distant and removed. Pierre Blaise seems more like a male model than an actor. More often than not Malle just has him posed in a scene. He rarely moves. Even when he does it is like a model on a cat walk. Blaise was the French James Dean. After completing only four movies, Blaise died in a car accident at the age of 23.