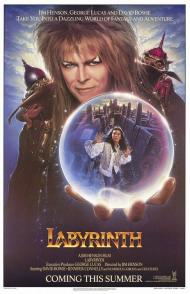 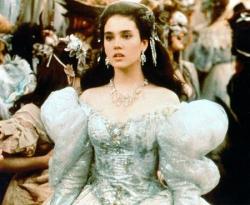 Labyrinth was a flop upon its release, but has gained somewhat in stature since then. It's the last movie directed by Jim Henson and features some imaginative muppets. It's written (mostly) by Monty Python alum Terry Jones and stars a young Jennifer Connelly. It certainly sounds like there should be something in it to entertain, but sadly, apart from occasionally looking impressive, it's actually pretty bad. I can see why little kids might enjoy it, but would recommend a large dose of drugs or alcohol to any adult before they watched it.

The plot is largely nonsense with traces of Alice in Wonderland and even The Wizard of Oz (but not as good as either). Connelly plays Sarah, a teenage girl filled with drama and certain that the weight of the world is on her shoulders and that life isn't fair to her. When asked to babysit for her baby brother she wishes out loud that the Goblin King would come and take the baby away. Sure enough, before you can say, "Really bad 80s hair", the Goblin King (in the form of David Bowie in some really, really tight trousers) shows up and takes the baby away. Sarah is then set with the task of getting her brother back by making her way to the Goblin King's castle, which sits in the middle of a labyrinth.

Although some of the special effects are dated, it's the look of the film that is the most impressive. There's a set straight out of an M.C. Escher painting that is particularly well done. Henson's muppets are creative and varied but unfortunately completely non-threatening. It's almost like a Terry Gilliam movie, but for kids.

Terry Jones is given the screenwriting credit, but reportedly his script was rewritten drastically by Henson. In interviews Jones has stated that one of the biggest changes made to the story was that in his original script you never saw the goblin king or the castle at the center of the labyrinth until the end of the film. The whole point of the script was to discover what was at the center of it and there would be a big reveal at the end. When David Bowie was cast as the king however, the studio felt that since they were paying for a star he ought to be shown more and so scenes of him in his castle were added during the story and there is no surprise at the end. Also, of course, because it was Bowie, they had to add scenes of him singing, which end up embarrassingly bad when he does it along with a bunch of muppets.

Of Connelly I can only say, it was a good thing she was cute because she certainly hadn't developed much as an actress yet by this point. To give her credit, it must have taken some concentration on her part to spend the majority of the film acting with muppets, but many of her line readings are stiff and awkward.

Apart from the interesting and often original visual style, there's just not much to this movie. It lacks depth and meaning. The visuals don't mean anything and the plot isn't allegorical, just nonsense. It's easy to see why despite its pedigree it failed to connect with audiences. 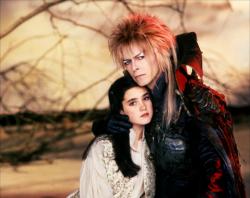 As Scott said, Labyrinth flopped upon its initial release. In the summer of 1986 it opened in eighth place behind The Karate Kid Part II, Back to School, Legal Eagles, Ruthless People, Running Scared, Top Gun, and Ferris Bueller's Day Off. Doesn't that list take you back? Over the intervening years, however, this movie has become a genuine cult classic. Jennifer Connelly has said it remains the role for which she is most often recognized on the street, and since 1997 an annual two-day masquerade ball called “The Labyrinth of Jareth” where guests dress-up like characters from the movie has been held in Hollywood.

Labyrinth has its charms for the kiddies but I have to agree with my brother. It's pretty awful. It is visually impressive but the story and dialogue are weak. The most interesting thing about it is picking out all the little details in Sarah's bedroom that either influenced the story or else later come into play. Several of which my brother already mentioned. At the beginning of the movie, you can spot copies of the classic children's books The Wizard of Oz and Alice in Wonderland as well as Where the Wild Things Are. Also a copy of the M.C. Escher drawing entitled “Relativity” that inspired the climactic set can be seen along with many other tiny homages to various characters that Sarah will later come across.

The songs are mostly forgettable and Bowie does look quite silly performing with a bunch of muppets. I didn't mind the tight trousers so much though. One interesting bit of trivia is that before Bowie was cast both Sting and Michael Jackson were considered for the role of the Goblin King. If Jackson had taken the part he would at least have looked more at home dancing with cloth puppets and I'm sure he would have written more memorable tunes as well.

I don't know for sure which scenes or characters came from the mind of Terry Jones but there are a couple of Python-esque flourishes. The Bog of Eternal Stench sounds like a rejected idea from a Flying Circus sketch. And the character of Sir Didymus, a chivalrous, fox-like knight who guards the bridge leading over this bog, while providing most of the movie's laughs, seems like he sprang from that same fertile imagination.

While I can't say I enjoyed Labyrinth I did learn a new word while watching it. Thanks to this movie I now know what an "oubliette" is. It's a form of dungeon which is accessible only from a hatch in a high ceiling.