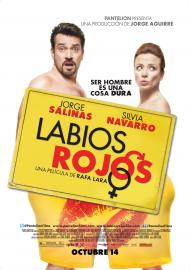 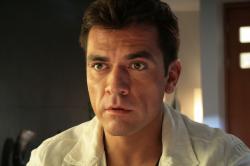 Labios rojos is an adult comedy from Mexico.  Unlike Hollywood films, it treats sex, whether in a monogamous relationship or a one night stand, as a natural part of life between normal healthy people.  Foreign films seem to depict sexual relationships in far more honest ways and is one of the reasons I enjoy them.

The film begins with Ricardo narrating his sexual history, from discovering masturbation in the shower to meeting his wife.  Now middle aged, married and the father of two, Ricardo is in that place that so many men find themselves, heavily burdened with responsibilities.  He gets a new higher paying job in advertisement and assumes life is about to get better.  The opposite happens as his new job and boss create more pressure than he has ever felt.  Anyone who has ever replaced someone at work can relate to when Ricardo reports for work and all he hears is how liked his predecessor was.

Not only is Ricardo feeling the stress of work and bills, but a ration of kidnappings have been occurring along the highway he drives to work.  Although that adds to his worries, it plays out later in a hilarious sequence.   As a married father of two, I related to Ricardo in a huge way.    He represents the average married Joe just trying to find happiness in a life that keeps throwing problems at him.

Ricardo gets more and more desperate, trying different methods to get his old friend to stand proud.  Although Viagra has been around since 1999, the movie never mentions it.  His wife hires a detective and starts to think her husband may even be gay.  The film goes so far as to have her even imagine that he may be having sex with his brother.

The plot gets a little wacky and a bit outlandish, but it's heart remains in the right place.  Although frank in its depiction of sex, the morality stays firmly conservative.  Labios rojos is first and foremost a love story.  The sex and sitcom type jokes keep things light and entertaining, but it all ends on a romantic, sentimental note.  His problems do not go away, but he learns that there are ways to deal with them.  Labios rojos is a fun adult film that any middle aged married man will enjoy.