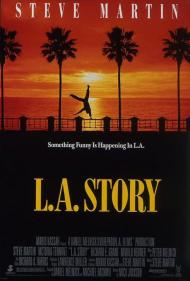 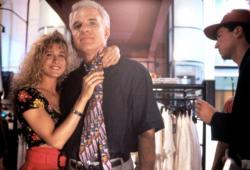 L.A. Story is Steve Martin's Woody Allen film. As Allen has highlighted his hometown of New York City in so many movies, so Martin does with his hometown of Los Angeles here. Although it obviously falls into the romantic comedy genre, it's in the comedy where the movie really shines. The love story is sweet enough, but not one for the ages.

The real love story in the script is between Martin and the City of Angels. Although he spends much of the film gently poking fun at the shallow nature of the culture and people of Los Angeles, it's obvious that he's doing it from affection rather than malice. And even though some of the cultural references are a bit dated (you don't hear about shootings on the freeways much anymore and complicated coffee orders are commonplace in Starbucks across the country), most of the L.A. stereotypes hold up pretty well with the heavy traffic and constant driving playing a big part as satirized by Martin driving to his best friend's house even though she only lives two doors down.

The other love story isn't helped by the fact that Martin cast his then wife Victoria Tennant as the female lead. She's sweet enough, but lacks movie star charisma. Although in some ways that is the point of the story because she stands out as being un-Californian, she still just doesn't bring enough to the role.

Martin plays Harris K. Telemacher a weatherman in Los Angeles where it's almost always 72 degrees and sunny. The movie opens with this narration, which sums up life in the the city as depicted here, quite nicely, “I live in L.A. And I've had seven heart attacks, all imagined. I was deeply unhappy but I didn't know it, cause I was happy all the time.” It's not just his useless job, for which he's overqualified, that's getting him down but also his shallow, high-maintenance girlfriend. When English woman Sara enters his life, he sees a chance for something different, but it's up to the city of Los Angeles, which is personified by an anthropomorphic traffic sign, to give him the nudge he needs to change his life.

Some of the humor is quite silly and surreal, such as the shooting on the freeway, while other jokes are more literate, referencing Fellini and Shakespeare, who surprisingly turns out to be buried in L.A., presumably where he wrote, Hamlet Part 8: The Revenge. While Martin saves the best lines for himself, Sarah Jessica Parker is a scene stealer as a sexy young valley-girl named SanDeE*, spelled just like that. With no exaggeration, it's one of the finest performances of her career.

Although the central love story isn't the strongest aspect of the plot, it does have some nice moments, particularly the night Harris and Sara first sleep together, which, accompanied by an Enya song, manages to be both lush and romantic.

Like Woody Allen, Martin makes an unlikely romantic lead, but there's no doubt of his comic abilities. He wrote a very funny script and he delivers a nice performance in it. Overall this is probably my favorite of all his movies. 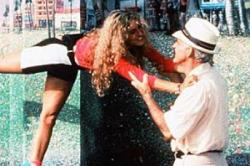 I agree completely with Scott. The romantic angle to the story is fairly flat. The only thing that seems to attract Harris to Sara is that she is not from California. It is not exactly the basis for an inspiring love story. My favorite moment of theirs is when Harris says to Sara, "Well, I was thinking of taking you on a cultural tour of L.A.." and
Sara comes back with, "That's the first fifteen minutes, then what?"

The film really shines when it puts an exaggerated spotlight on the Hollywood culture, or lack there of. To get reservations at an over priced, popular fad restaurant, Harris has to jump through hoops, "You think with a financial statement like this you can have the duck?" The  Maitre D' snaps at him. There are also jokes about fake breasts, the Los Angeles crime rate and even the architecture. Sara's ex-husband constantly calls Los Angeles, "...a place for the brain-dead."

Scott wrote that this is Sarah Jessica Parker's best role, and I agree. She is hilarious as the air head with an open relationship with her boyfriend. She is studying to be a spokesmodel. As she explains, "Yeah, 'cause it's a lot harder than it looks." She never stands still the entire film. Her body is constantly in motion. I found it ridiulously funny when she climbs through the car window for some reason. Parker has never been more charming on screen.

Martin's script bounces between the absurd and the poetic. In one scene he speaks the pensive line, "Why is it that we don't always recognize the moment when love begins but we always know when it ends?" Later he says to Parker, "Well, thank you for a lovely lunch and enema." I could not help but enjoy a script that understands that life is a series of different experiences, be they dramatic, heart felt or hilarious, and if your life does not have that variety, then you need a sign to help you find it.

L.A. Story is smart, whimsical and silly. Steve Martin's script is great. The humor ranges from the surreal, like the freeway shoot-out or the earthquake at the restaurant where jaded Californians continue nonchalantly eating and conversing while their tables glide across the room, to highbrow references to Shakespeare such as the scene with Rick Moranis as a gravedigger that spoofs Hamlet. Martin is also quite funny in the scene where he interprets a painting, going into great detail, only to have it revealed at the end to be an abstract painting done all in orange.

The dialogue is endlessly quotable. Harris proudly shows Sara around Los Angeles, “Some of these buildings are over 20 years old.” Or when the car has a mind of its own and Harris tells Sara, “Here, let me not drive for a while.” Or Steve Martin rollerskating through a museum of classic paintings, “I call it performance art, but my friend Ariel calls it wasting time. History will decide.” Or when Harris learns that Trudi has been cheating on him for three years, “Three years? You mean this has been going on since the '80s?” Some jokes are more subtle. Like when Trudi introduces her friend Sheila to Harris. “Sheila has been studying the art of conversation.” Harris asks, “Oh, you're taking a course in conversation?” Sheila responds simply by saying, “Yes.” Followed by a long awkward pause.

Visually, L.A. Story presents the City of Angels as a magical romantic place. Palm trees are silhouetted against a sliver of moonlight in the background in the scenes with the sentient traffic sign (see photo). There are many interesting details thrown in and quite a few cameos by famous faces. L.A. Story seems like the kind of movie that gets better and can be more fully appreciated upon repeat viewings. This was the first time I watched it but it will most certainly not be the last.

I'll join the chorus praising S.J.P.'s performance as SanDeE*. She is so natural as a free spirited California Girl that is seems ironic she would become most famous for playing a dyed-in-the-wool Manhattanite in Sex and the City. As for Victoria Tennant, she isn't bad as Sara despite, as my brothers wrote, lacking movie star charisma. As Scott said, the role calls for her to be the antithesis of all things shallow and vapid (Californian). She may not create fireworks with Martin but she is adequate to the part.

I agree Scott, L.A. Story just might be my favorite Steve Martin movie as well.