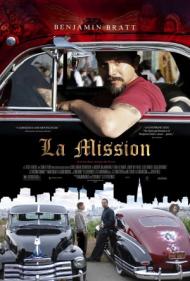 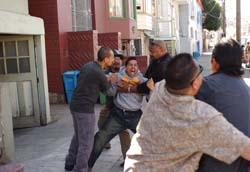 Straight father and gay son in a moment of conflict.

Benjamin Bratt stars in this beautifully wrought movie about life in La Mission, a tough mostly Chicano neighborhood in San Francisco. Bratt is Che, a single father, ex-con, recovering alcoholic. Approaching middle-age he has finally gotten his life together. His job as a city bus driver enables him to provide a decent home for his teenaged son; for a hobby he restores and paints vintage “lowrider” cars.

The picture of athletic machismo, Che is well-respected around the barrio. So when he discovers that his only son - the apple of his eye and the reason he was able to quit drinking and get his life together - is gay, his world falls apart. He reacts violently at first, kicking his son out and refusing to talk about it with his friends. He begins a tentative relationship with a new female neighbor upstairs and slowly begins to reconnect with his son.

Bratt gives a truly heartfelt performance. I never realized just how talented he was. Jeremy Ray Valdez is likewise good as the son Jesse. Their relationship is both gut wrenching and a thing of beauty. The love between them is palpable even when it comes out through acts of violence. The only performance that is sub par is given by Erika Alexander (that you may remember from The Cosby Show) as Che’s love interest, Lena. Her acting lacks any real emotional bite.

I loved the fact that Jesse is portrayed as a normal boy on the verge of manhood. He is athletic, smart and good hearted and there is nothing stereotypically gay about him. The need he feels for his father’s approval is evident but there is also a line at which he stops seeking it. There isn’t one false note in this father/son duet. Although to be objective, as touching as the storyline is the outcome is never really in doubt.

This movie was a family affair for Benjamin as his older brother Peter wrote and directed it. They grew up in the neighborhood depicted here which adds a measure of authenticity. As an added plus the soundtrack features many old-school soul classics from the likes of The Isley Brothers and Marvin Gaye.

I hope La Mission fulfills its mission of helping bring gay teens and their parents together. 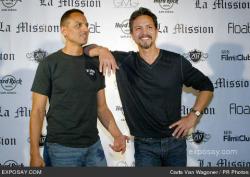 Patrick wrote as if the fact that Benjamin and his older brother Peter grew up in the neighborhood depicted is a bonus.   I would agree if the colorful atmosphere was kept in the background.  As it is, Peter's direction lingers far too often on the neighborhood and culture.  Several times the movie pauses to show people dressed in traditional Aztec costumes performing rituals on street.  Sure the colored feathers and details in their clothes are worth noting, but once would have been enough.

La Mission runs nearly two hours long, yet the plot is merely a father coming to terms with his son being gay.   Che and Lena have more scenes together than Che and Jesse.   Hell, the Lowrider cars get as much screen time as Jesse.  The cars look sweet with their extremely shiny polish, but again, Peter Bratt lingers far too long on something superfluous to the plot.  There is two different scenes of the Lowriders driving around town at night.   Neither features much dialogue.  They are just there to show off the cars and play some classic songs.   Twenty minutes could have, and should have, been cut from this film.

Although there is not enough plot to fill two hours, I do agree that Benjamin Bratt impressed me as an actor.   It is a testament to his acting as the plot gives very few details to many key points in the film.  Che was in prison, but why and for how long we are never told.  Jesse's mom is dead but again, we are not given many details.  How Jesse met and fell for his rich boyfriend is never explained.  In fact, the only detailing going on in this movie is in the paint jobs on the cars.

Patrick, you loved that Jesse is portrayed as a non-stereotypical homosexual.  I agree that there is nothing outwardly "gay" about him, which is almost too bad.  He could have used some personality.  He is a clean cut, well mannered, religious, intelligent young man.  He is written as if his only "flaw" is that he is gay.   It is too easy of a set up to have the ex-con alcoholic versus the perfect son.

La Mission was obviously a labor of love for the Bratt brothers, who also share producer credit.  They proudly show off the culture and lives of the people of this neighborhood.  Interesting to note is that the only white people featured are cops and Jesse's boyfriend.    Or as Che says,  "Who's this fucking white boy?!"   Would he have been less offended if it were a Chicano?

La Mission has some good moments.  My favorite was when Jesse calls his dad, "predictable" only to have his dad slap him and say, "Then I guess you saw that coming, right?"  Another good line is when Che says to Lena, "Do you know what you are?"  and she responds, "Actually I do, but if I ever need a second opinion I 'l be sure to ask."

This was obviously a personal film for the Bratt brothers, but that does not completely work in their favor.   Clearly they wanted to show off their neighborhood, but they needed to pull themselves away from it a bit and do some needed editing.   A film's setting should compliment the story, not distract from it.