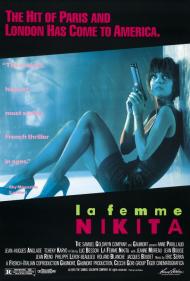 At the time of this writing, the original film, Nikita, later renamed La Femme Nikita is a bit lost on those who simply know the television show.  A huge hit when it first came out in 1990.  A lesser remake was quickly made by Hollywood in 1993, renamed Point of No Return.   I have never seen the television show but I doubt it was any better then the original source material.

As the movie starts, Nikita, is a drugged out Parisian punk hoping for another high.  She is with her friends when they break into a pharmacy and get into a gun fight with the police.  She kills one of the policemen and finds herself sentenced to life in prison.  Instead of a life sentence she finds herself in a cell talking to a man named "Bob" who has some startling news for her. "You died Saturday at 5:00 p.m. The prison doctor confirmed suicide after an overdose of tranquilizers. You're buried in Maisons-Alfort, row 8, plot 30."  He tells her she has been given another chance by serving her country as a covert agent.  Nikita asks, "What if I don't want to?"  Bob simply responds, "Row 8, Plot 30."

Nikita is then given all sorts of training including hand to hand combat, and gun use.  She is also taught computers.  Of all her training, the hardest for her to learn is how to be a lady.  She has one on one sessions with the legendary French star Jeanne Moreau, who tells her, "There are two things that are infinite: femininity and means to take advantage of it."

Three years later Nikita finally graduates from the training facility.  She is now a killing machine who knows how to apply makeup.  Her final exam, given by Bob is a scene you will certainly remember.  It features the movies most memorable image, that of Nikita diving into a laundry chute.  This is a Luc Besson film after all.

You can certainly enjoy this as an action film.   It features several tense sequences including a very well made climactic scene featuring an eleventh hour appearance by Jean Reno as The Cleaner.  Unlike so many action films though, the title character has a real story arc.  She goes from being a cold hearted, self centered bitch to a woman of feelings and compassion.  This was caused by a grocery cashier she met one day and fell in love with.  It is easier for her to be a cold blooded killer when she has only herself to think about, but not when she has someone in her life who wants to plan a future with her.  She is one of the most "human" assassins ever put on screen.

Anne Parillaud was an interesting choice for the lead.  She is not classically beautiful and her feminine curves leave much to be desired.  She cleans up nice when made up and wearing a black mini but it is a weak disguise.  Anne Parillaud is though, a great actress.  She plays a range of emotions.  Early in the movie she is an obnoxious loser, but later when Bob takes her on a date, she is nervous and quiet.  Sure she is dressed different, but Parillaud carries herself in an entirely different manner.  Anne Parillaud continues to act today and has made some English speaking movies, but her legacy in American pop culture will always be as the actress who originated, La Femme Nikita. 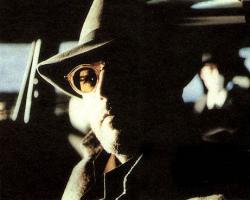 Jean Reno is the Cleaner in Nikita.

They say every man has a 'type' of woman they are attracted to. If that's true than it's easy to see what type Luc Besson favors. From Nikita to Colombiana, he likes his women packing weapons. Judging by the mess that was Colombiana, perhaps it's time he moved on to something new, but way back in 1990 when the subject was still fresh from his pen, he was on top of his game.

Eric, I couldn't agree with you more when you say, "She is one of the most 'human' assassins ever put on screen." The irony of the story is that it is only when Nikita learns to be a killer that she learns what it means to be human and alive. Her journey from drug addled murderer to fully rounded human being is well done and believable. I mean, how many movies can you name where the lead character starts by killing a police officer and yet by the end of it you not only empathize with them, but you actually want them to succeed?

Compared to a big budget Hollywood film, this movie is a bit rough around the edges and that includes Parillaud in the lead. The gritty look and feel to the story actually helps and makes it feel more realistic despite the often outlandish situations. And all the Hollywood sheen in the world certainly didn't help the rather lame American remake.

The action is well done. Her first assignment is definitely the most famous, but there are several others. One of the tensest moments doesn't even have that much action. It's Nikita in the bathroom with a sniper rifle while her boyfriend is in the next room pouring his guts out to her. It's a great moment that shows both sides of her character.

Jean Reno does make an impact as the cleaner. So much so that Besson would reprise the character in all but name in The Professional, right down to using the same costume. His scenes are some of the most violent, including one disturbing moment where he is using acid to dispose of some bodies, only to find out that one of the bodies is still alive.

I don't know what made Besson obsessed with violent females, but when watching movies like this one or The Professional, I'm glad he is. 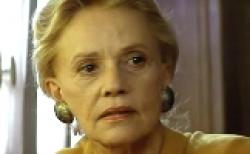 La Femme Nikita holds up well. Apart from the antiquated computers and the over-use of the synthesizer in the score (by frequent Besson collaborator Eric Serra) it could have been made today. It is a taut and fast-paced thriller with the gimmick of a female assassin. The character of Nikita was ahead of its time and has now become an iconic image. The glamorous but deadly female killer, sporting a short gamin hairstyle, wearing tight black clothes and carrying a large weapon, has been copied in many movies and video games.

Anne Parillaud, as Eric mentioned, gives an intensely satisfying performance. I think her single best moment comes when Amande (Jeanne Moreau) tries to coax a smile from her while gently caressing her cheek. The struggle that flickers across Parillaud’s face is exquisitely riveting and expresses so much about her feelings without a word of dialogue. Norma Desmond would be impressed and so was much of Europe. Parillaud won the French equivalent of the Oscar the César for Best Actress, as well as the David for Best Foreign Actress at Italy’s David di Donatello Awards.

The legendary Jeanne Moreau imbues her few brief scenes with a certain mystique. She makes you want to know more about her past, which most definitely must have been fascinating (in my mind’s eye I picture her as a young woman blowing up bridges in Central America with Brigitte Bardot ala Viva Maria!).  Now well into her 80s she continues to act regularly in movies in her native France.

Besson keeps the action coming but infuses the violence with the right amount of appropriate humor. For instance when Nikita demonstrates her marksmanship at a shooting range the instructor comments that she must have used a gun before. She replies, “Not on paper.” The supporting cast is great but this movie is all about Nikita. As Scott wrote you despise her at the beginning of the story, but against all odds, she somehow makes you fall in love with her by the end. 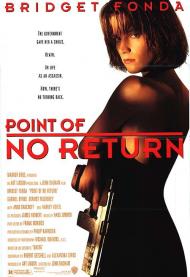